Phoenix avenges yesterday’s loss to the No. 1 seed with a 6-3 victory 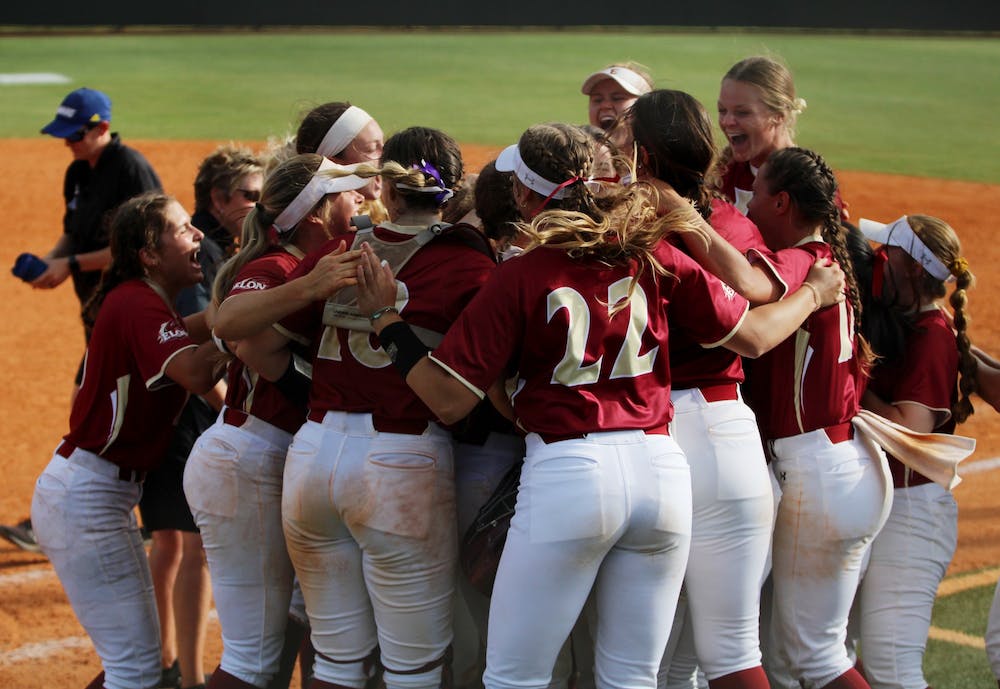 
The Elon University softball team celebrates after defeating the University of Delaware 6-3 in the Colonial Athletic Association Softball Tournament on May 13 at Hunt Park. Elon advanced to the final day of the tournament with the win.

The Elon University softball team avenged yesterday’s loss to the No. 1 seeded University of Delaware Blue Hens at the Colonial Athletic Association Tournament on Friday, winning 6-3 to advance to the final day of the event.

“Yesterday, after the game, one of the things the whole team talked about was like, ‘Listen, we’re coming. We’ve got to come back tomorrow and win because we want another shot at them,’” Bocock said. “They got what they wanted.”

Elon did not score against Delaware yesterday and did not find the scoreboard today until the top of the second inning, when senior first baseman Keagan Goldwait walked with the bases loaded to put the Phoenix up 1-0.

Later in the second inning, Elon brought in junior Claudia Penny to pinch hit with the bases loaded. Penny, who entered the game with just three RBI all season, drove in a pair of Elon runs with a single to second base, making the score 3-0.

After that inning, Delaware pulled starting pitcher Emily Winburn, who pitched all seven innings in yesterday’s game. Bocock said Elon made adjustments at the plate after seeing her pitch so well Thursday.

“She has a really good changeup, and we were trying to chase that too much. So, we got a lot more disciplined, and she had to give us pitches we could hit, and we did a good job with that,” Bocock said.

Elon’s offense struck again in the top of the fourth inning, as senior designated player Megan White scored junior catcher Carley Davis with a sacrifice fly, making the score 4-0. Then, in the fifth, Elon loaded the bases for a second time and scored a run when junior right fielder Drew Menscer singled to score junior shortstop Bella Devesa.

In the sixth, freshman left fielder Chloe Hatzopoulos delivered her third hit of the game to score freshman Bella Backer, who was pinch running, from second base. For Hatzopoulos, patience at the plate was the key for finding success against Delaware’s pitchers.

Freshman pitcher McKenna McCard, who pitched six scoreless innings against Delaware yesterday, pitched five scoreless innings today and did not allow her first hit until the fifth inning. However, Delaware scored three runs in the bottom of the sixth to cut Elon’s lead in half and force Elon to bring in graduate student Alexa Nemeth into the game from the bullpen.

Despite the difficult sixth inning for McCard, Bocock said she is proud of her effort as a starting pitcher each of the last two days.

“She’s very confident, and she’s had some really good outings when she’s started,” Bocock said. “She’s basically said, ‘I’m a starter, not a reliever,’ so she’s owned that, and she’s doing a good job for us.”

Nemeth got the first out in the bottom of the seventh for Elon before Bocock brought freshman Isley Duggins into the game. Duggins, who delivered a complete game shutout earlier in the day against Charleston, said she was aware she might be needed at some point in the game but did not expect to enter after McCard’s dominant start.

Duggins secured the second out of the inning with a groundout. In the next at-bat, it appeared Hatzopoulos had ended the game with a leaping catch on a high fly ball in left field. With the ball in Hatzopoulos’ glove, Duggins jumped in the air to celebrate, but the ball fell out as Hatzopoulos made contact with the fence, giving Delaware a double.

“That ball was hit very well,” Hatzopoulos said. “The impact of the fence and then hitting my glove, it just kind of fell out. But I knew that my team had my back and that this next out, we were going to get it, and we were going to win this.”

Duggins did just that for Elon, as she forced a groundout to Devesa to end the game and clinch the win for the Phoenix.

Elon entered the game 0-4 this season against Delaware. For Duggins, avenging yesterday’s loss and finally defeating the conference’s best regular season team to make it to the final day of the tournament is a huge accomplishment for the team.

“It means a lot because we knew that we had to come do that today,” Duggins said. “I’m so excited, we’ve been talking about this all season. This was one of our biggest goals.”

Freshmen pitchers have started all four games in the tournament for Elon, and freshmen have also provided important contributions for the team at the plate. Hatzopoulos said the mentorship from the team’s upperclassmen has been important for the seven-player freshman class.

“This freshman class is really strong. We are all very close, we love the game, we play our hearts out,” Hatzopoulos said. “It’s also thanks to our upperclassmen and our coaches because they motivate us.”

In addition to its strong pitching performance, Elon finished the game with nine hits after delivering just three in yesterday’s loss to Delaware.

Elon will play the University of North Carolina Wilmington for the CAA championship tomorrow. Wilmington is undefeated in the tournament, meaning Elon will need to beat them two times to win the tournament. The teams will play at 10 a.m. in the first game tomorrow and will play again at 12:30 p.m. in a winner-take-all game if Elon wins.

Elon won two out of three regular season games against Wilmington this season. Elon has played two full games since Wilmington last played, and Bocock said Elon will need to be ready for tomorrow.