In an otherwise tight game, the Blue Hens walked off with the victory in the seventh inning 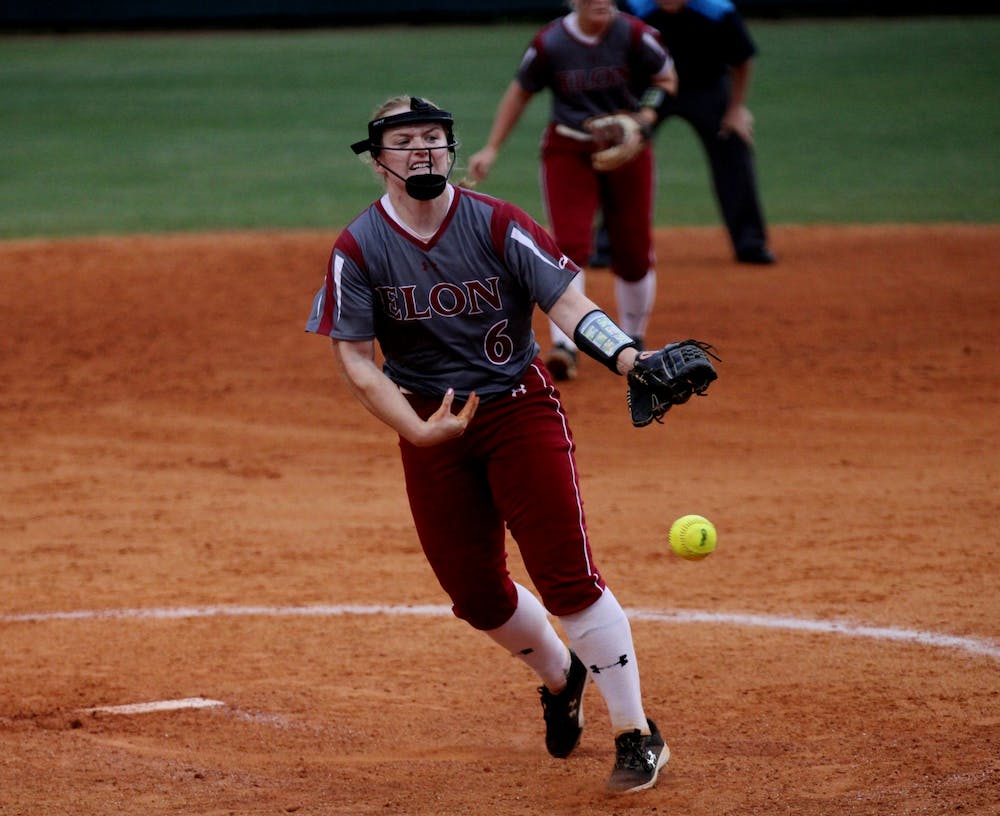 
Freshman Taylor Cherry throws a pitch during the seventh inning against the University of Delaware during Elon’s second Colonial Athletic Association Softball Tournament game on May 12 at Hunt Park. Elon lost 1-0.

The Elon University softball team lost to the No. 1 seeded University of Delaware Blue Hens 1-0 in its second game of the Colonial Athletic Association Tournament.

In a nailbiter of a game, the Blue Hens walked off with a hit down the middle of the field that could not be turned home in time. Today’s loss allows the Phoenix just one more loss until they are eliminated from the tournament.

“When we went up to Delaware, they beat us three times, so I think our girls went out there and did a heck of a job fighting against them,” head coach Kathy Bocock said. “One hit could’ve made a difference, and we just didn’t get that hit, and they did.”

Until the seventh inning, it was a struggle offensively on both sides. The third-base bag was as clean as it started until the sixth inning when junior right fielder Drew Menscer stole third base to put the Phoenix in their best scoring position all game. But, with three outs left to give and junior catcher Carley Davis making her way to second as well, the Phoenix was not able to bring either of the two runners in.

For Bocock, the lack of offensive advancements can be credited to the pitchers from both dugouts. Blue Hens starting pitcher, junior Emily Winburn, pitched all seven innings, allowing just three hits in 27 batters seen.

“She had a good changeup, she had a really nice changeup, and we were trying to get them to lay off of it because of the fact that it wasn’t for strikes,” Bocock said. “We didn’t adjust to that very well, and again we got some people where we needed them, and we just couldn’t pass the bat.”

For the Phoenix, freshman pitcher McKenna McCard had what Bocock described as “the game of her career.” Allowing just four hits against the team with the second-highest batting average, slugging percentage, on-base percentage, runs scored, hits and RBI in the conference, McCard was able to keep the team in the game.

“I haven’t had the best season so far, but that is the best I've ever felt,” McCard said. “Just looking into my teammates eyes and seeing how bad everyone wanted it just fired me up to just want to do my best for them.”

McCard’s effort was applauded when she was taken out of the game in the seventh inning for fellow freshman Taylor Cherry. McCard allowed her last runner to make it to first base, which was followed by Cherry walking her first batter. With no outs and knowing that a run would win the game for Delaware, both dugouts were hot with energy.

When the next Blue Hens batter put the ball in play, Blue Hens senior Halle Kisamore rounded third base and headed home. Skipping the cutoff man, freshman left fielder Chloe Hatzopoulos fired the ball home to Davis, who tagged Kisamore out at home to get the first out of the inning.

The remaining two batters advanced while Kisamore made her way home, giving Delaware a runner on second and third with just one out. In the next at-bat, the ball was put into play, allowing the Blue Hens runner on third to run home and beat the throw.

As the CAA Softball Tournament uses a double elimination bracket, the Phoenix get a chance to return to its home park and fight for its spot in the tournament. Elon will play at 11:30 a.m. tomorrow against either College of Charleston or Hofstra University.

“We told them, ‘Look, if you don’t come to play we’re done, but if you come to play, we keep going,’” Bockock said. “I think they want to keep going.”

For McCard, staying in the tournament means more than continuing the season – it means getting the chance to face the Blue Hens one more time.

“I told them in our meeting that I am the most fired up I’ve ever been because I want to play them again, I want them again,” McCard said. “We were that close, we were on the edge of victory, and I know if we face them again, we’ll push it over the edge and win.”