Graduating student-athletes prepare to take next steps, reflect on past experiences 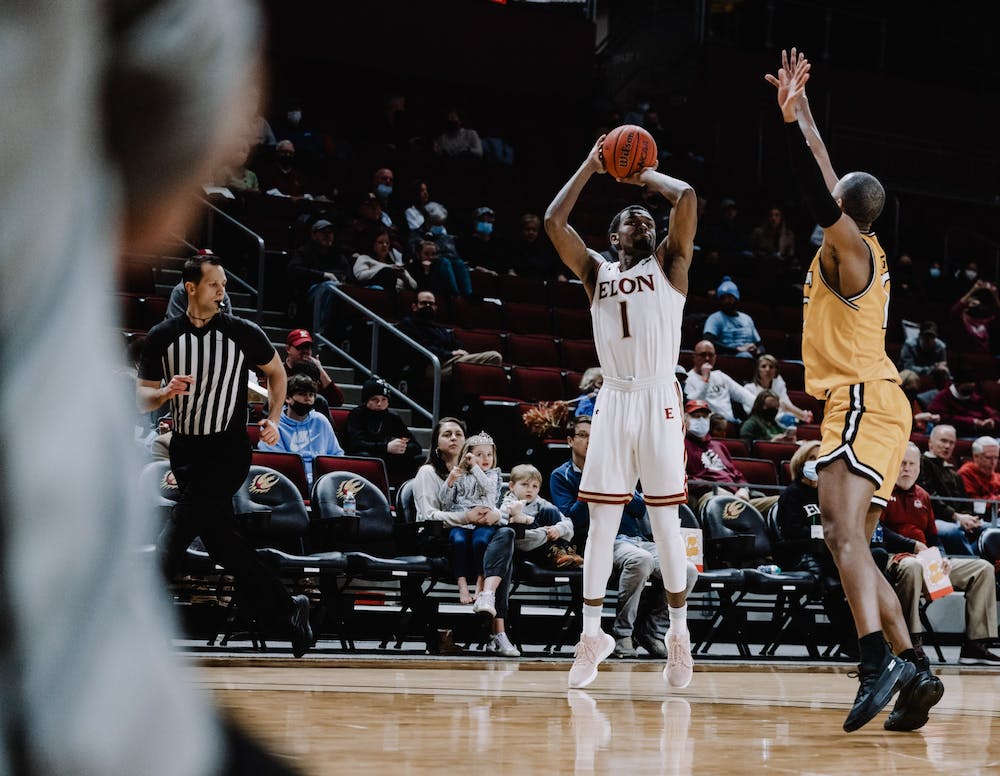 Photo by Lucas Casel | Elon News Network
Senior Chuck Hannah shoots for three points in the third quarter. The Phoenix would go on to lose 54-59 on Saturday night.

When Natalie Cummins ‘21 began applying for graduate programs in January, she discovered the application process was much different from when she committed to play volleyball at Elon in junior year of high school.

Cummins, who graduated with a bachelor’s degree in sport management from Elon in May 2021, used the extra year of eligibility granted to all athletes in the wake of the COVID-19 pandemic to play one more season of volleyball last fall. She added a psychology minor for the fall semester, helping her decide to pursue a career in sports psychology. After applying to five programs, she committed to continue her studies at Loyola University Maryland’s clinical professional counseling program.

“The application process was new for me, a little more overwhelming than it was going from high school to college because I knew I was committed to Elon,” Cummins said. “That was a crazy process, and it made me very anxious, but it was exciting, and it ended up working out.”

For senior and graduate student athletes departing Elon this spring, there is both excitement for the future and disappointment that their time playing competitive sports is over. Cummins said she is grateful to have been a Division I athlete at Elon.

“I feel so lucky just to have been a part of it,” Cummins said.

Cummins was one of two players on Elon’s volleyball team last season that returned to Elon for a “super senior” season, along with Julia Crabtree ‘21. When Cummins returned to the team, she earned a nickname from her underclassmen teammates that stuck throughout the season.

“The girls, particularly the incoming freshmen, called me grandma,” Cummins said. “It was fine, and it was so funny, but it was true. Like, that really was my grandma year.”

Cummins knew she wanted to continue her education after graduating from Elon, and with schools across the country still dealing with COVID-19 restrictions, she decided to return and play for one more year.

As a team captain, Cummins helped Elon make it to the championship match of November’s Colonial Athletic Association Tournament for the first time since the program joined the conference in 2014. She said she has no regrets about returning for a fifth season.

For Cummins, being a student athlete at Elon helped her develop as a person, and she said she believes the experience will help her with her future endeavors.

“It was cool to be a young kid seeing the older girls on the team mentor me, and I know how much of an impact they had on my volleyball and just my overall Elon career,” Cummins said. “And then being able to turn that around and start bringing the new girls up and teaching them about Elon and Elon volleyball was such a cool experience.”

While Chuck Hannah cherished his time playing basketball at Elon, the graduating senior said he will also forever carry the memories he made while working as an orientation leader and team lead for Elon’s New Students Programs.

“I was itching to find another avenue to connect with more people that wasn’t just in the athletic realm,” Hannah said. “I didn’t want people to see me as the kid that just wears number one on the basketball team, that’s not what defines me.”

On Aug. 1, Hannah will begin his first post-graduate job with Charles Aris Executive Search in Greensboro, a company he previously interned for. While Hannah is excited for this new chapter in his life, he said he is also nervous about the uncertainty it comes with.

“You never really know what’s going to happen, and it’s not as simple as going to swipe into the McEwen or Lakeside,” Hannah said. “I have to map out what I’m going to eat, how much it’s going to cost, all that kind of stuff, so there’s a lot more things I have to think about.”

Hannah was part of Elon’s 2021 men’s basketball team that qualified for the program’s first ever CAA championship game. After 65 starts in four seasons with the team, he is grateful for what his previous coaching staff taught him about basketball, but more importantly, life.

“We have a saying in our practice gym — you’re either getting better or you’re getting worse, you never stay the same,” Hannah said.

Although Sam Bacon’s college soccer career has come to an end, his school career has not. In August, the former Elon University men’s soccer player will begin working toward a master’s degree in information systems management at Carnegie Mellon University.

While Bacon is looking forward to a fresh start at a new school, he said he will miss the connections he made at Elon and is nervous about the transition.

“The newness of it all is very exciting for me, but at the same time, I think that where a bit of the nervousness stems from, just all the unknown,” Bacon said.

After redshirting his freshman year, Bacon made 29 starts during three seasons at Elon. A team captain this season, Bacon helped the program reach its first CAA championship match since joining the conference.

For Bacon, helping establish a winning culture at Elon is his proudest athletic achievement at the school. But Bacon was not only a star athlete during his time at Elon — he was also a star student. An Honors Fellow, Bacon took honors seminars in each of his first two years at Elon and completed a research thesis focusing on data visualization methods in his final two years.

“I take sports very seriously, and I had my team, and my coaches and that whole part of my image, but at the same time, I take school very seriously,” Bacon said. “It was nice to have the Honors Program and those people who I knew were on the page as me about school.”

Going out a champion

“It fills you with joy when you win a championship. To have been a part of five championship teams, each one was super exciting,” Preeo said. “The team aspect is the one thing that stands out to me the most. We’re always there for each other. We want each other to succeed, and we’ve become so close.”

A native of Australia, Preeo will return to the country this summer before beginning a graduate nursing program at an Australian university next March. For now, she hopes to become a nurse but is open to other possibilities.

“I’m looking forward to it. I’ve never been to university in Australia, so it’s going to be something new,” Preeo said.

Preeo is thankful for her time as a student-athlete at Elon and hopes future students will take advantage of their time at the university.

“It’s really important to be living in the present each day and be grateful for what you have because you have so many amazing resources,” Preeo said. “College is a great chapter of your life. Looking back at it now, it’s like, wow, I really had the time of my life.”