Taylor comes to Elon with NCAA tournament experience, extensive coaching background, but will need to pick up the remains of Elon men’s basketball 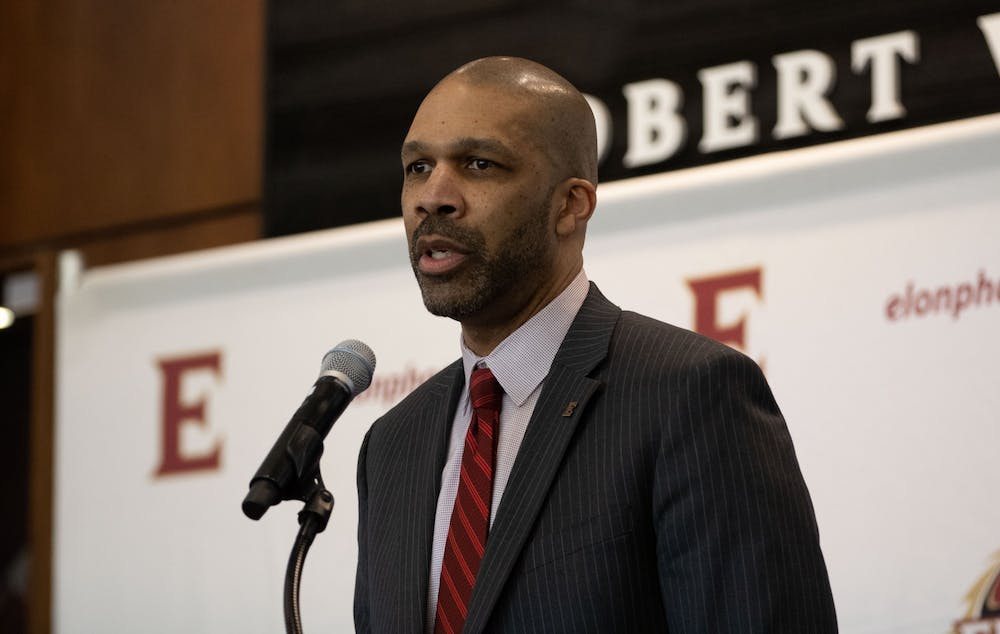 Photo by Erin Martin | Elon News Network
New men's basketball head coach Billy Taylor speaks at a press conference on April 19. Taylor comes to Elon from the University of Iowa as the former assistant basketball coach to the Hawkeyes.

A resignation, seven transfer portal entries and a nationwide search for a new head coach all transpired in the span of 10 days for Elon University men’s basketball program. The intense period eventually turned in a new direction when the team found its next leader: Billy Taylor.

Taylor comes from the University of Iowa as the former assistant basketball coach to the Hawkeyes. The national search for a replacement began the day of Schrage’s resignation and just 10 days later on April 15, Elon announced that Taylor would fill the role. In a press conference hosted by Elon Athletics on April 19, Taylor said that he’s excited to begin his new journey at Elon.

“It's been so enjoyable to get to this point and to be excited about a place that I feel is a perfect fit for us as a family, for Elon, for our student athletes, and really a culmination of all the travels that we made, the people the relationships we've built along the way to get here to this point,” Taylor said at the press conference.

Elon University’s director of athletics Dave Blank introduced Taylor at the press conference and said although the search for a new coach brought in a lot of national interest, Elon kept finding its way back to Taylor during the hiring process.

“Everybody has told me Billy gets his work done in practice. He likes his players to perform when they play in games,” Blank said. “There's something to be said for that level of maturity in the coaching profession, that he has the right formula and knows how to do it.”

Before his time at the University of Iowa, Taylor’s head coaching experience started at Lehigh University from 2002-07. He continued as head coach at Ball State University for six seasons from 2007-13 but was fired after the team lost to University at Buffalo in the Mid-American Conference tournament in 2013. Taylor had a presence in North Carolina when he served as the assistant coach of UNC Greensboro from 1999-02 and the head coach at Belmont Abbey College from 2016-19.

Taylor’s first stint with University of Iowa began in 2013 when he served as the Director of Basketball operations until in 2016. In 2019, returned for his second stint as the assistant basketball coach to the Hawkeyes.

Elon football head coach Tony Trisciani worked at Lehigh University the same year as Taylor, and although he didn’t work directly with him, he said he’s excited about how far Taylor will take the men’s basketball team.

“I'm excited for coach Taylor and the opportunity that he has here at Elon, I think he's going to be a great fit,” Trisciani said.

Going into the 2022-23 season, Taylor will have to pick up pieces of what remains for the Elon men’s basketball: seven players have entered the transfer portal since Schrage’s resignation. Though the players have entered their names, it is not a guarantee they will leave Elon. It does, however, grant a release so that other schools may contact them about playing for their teams next season.

Only six players from last season’s roster have not entered the transfer portal and will not graduate this offseason. Elon University Athletics and members of the men’s basketball team declined to comment on this story.

“We've been hit by it, and we've got a lot of guys in the portal currently. … Navigating the transfer portal is unique because there are programs that try to do it all in the transfer portal and they neglect the student athletes we have here,” Taylor said at the press conference. “I don't believe in that. I believe we have something here. We have some special talent in our program currently. We need to enhance that with some help from the portal to replace some guys we're losing, and we need to still recruit our high school student athletes.”

Trisciani, who’s familiar with Taylor’s ability to coach, said he hopes that those on the basketball team who entered the transfer portal will reconsider leaving and remember the student-athlete experience on campus.

“Give coach Taylor a chance,” Trisciani said. “I think he's a guy they'll enjoy playing for and they'll continue to develop the culture that's been building here.”

Rebuilding on and off the court

Cheering in the stands at every game is sophomore Kassidy Puckett, vice president of Phoenix Phanatics. Puckett said Elon’s student spirit group was in the middle of building a stronger relationship with Schrage before he left. Now that the new coach is announced, relationship building will need to restart.

Puckett said she is personally excited for this new chapter for Elon men’s basketball, despite the number of changes that occurred within the team over the past two weeks.

Bill Bride ‘85 has been supporting Elon athletics since he graduated, and after hearing about Taylor, he said he was impressed with Elon’s choice because of the variety of roles Taylor has held throughout his career, including his four-year letterwinner at Notre Dame, where he was recruited by Digger Phelps and started 79 career games.

“What's important about this hire is he has experience and is taking teams to the postseason,” Bride said. “That’s something Elon hasn't had ever since they've gone to Division I.”

Bride recently purchased his season tickets for men’s basketball and said he is looking forward to what Taylor will bring to Elon, but healing the team should be one of the first priorities.

“The first thing he needs to do is get to work on keeping some of the players that are in the transfer portal at Elon and re-recruit them,” Bride said. “Then, he has to go out and fill any spots that are left over from players who have already left.”

Despite these challenges after immediately joining the program, Bride said he thinks Taylor’s experience with past NCAA tournaments and championships will be beneficial to the Phoenix. Over the last three seasons at Iowa, Taylor and the Hawkeyes placed in national rankings and the NCAA tournament, including their win in the 2022 Big Ten tournament championship. Back in 2004, he took Lehigh University to the NCAA tournament when he served as head coach.

Elon basketball has been a Division I program since 1999 but has not attended a NCAA championship. Schrage was closer to this goal than any previous coach at Elon, but he did not accomplish it, leaving Elon with a 33-52 record in three seasons and having led the team to the 2021 Colonial Athletic Association Championship game. Elon men’s basketball went 10-22 this season and finished with a 7-11 conference record.

Going off of the Phoenix’s record this past season, Taylor hopes to take the team on a journey toward winning and help the Phoenix rise.

“We can win in the Colonial, we can become regionally relevant. We can go into national prominence and that's what we want to do,” Taylor said at the press conference. “That's not a short journey. It takes time. It takes a lot of work. These young men are going to commit themselves and they're going to put in a lot of effort to get us there. But I'm excited about that journey that we're going to take.”