What does Women’s History Month mean to you?

Elon University students, faculty and staff around campus share what women’s history means to them 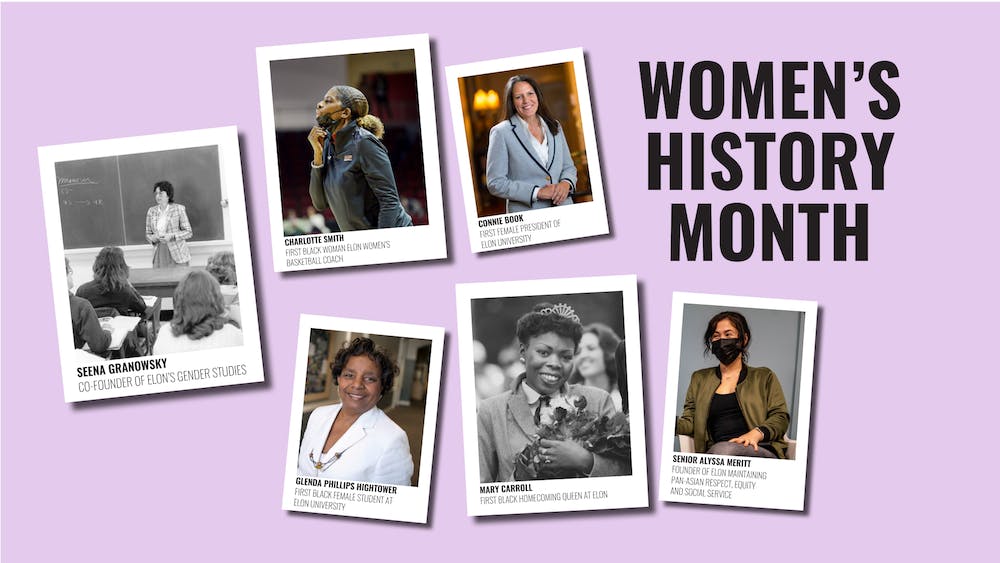 
The Elon community shared their thoughts and opinions about Women's History Month.

What does women’s history month mean to you?

“To me, it just means a moment to shine a light on the women who really made this country, make the world, what it is. … We have founding fathers; the only time you consider something mother or womanly is the nation itself, like we're supposed to represent tradition, and that's it. But we built all this, we do amazing things. So yeah, it's amazing. It's a spotlight on us, even though it should be there all the time.”

“It's kind of like a symbol of all the rights that we've been able to get throughout the years.”

“I'm not a woman, so I don't experience the same things that women do. So I think for me, primarily, it's about understanding things that I'll never experience in my lifetime.”

“Just celebrating women and what we've worked very hard for, and just making it equal between men and women."

“To me, it's just a reminder of how far we've come. And all the struggles that we've basically experienced to get to where we are. And it's still not as perfect as it could be, and many other places in the world. But we're still very privileged to kind of have what we have, but it's also not enough. And I know that sounds selfish, but you know, it's still there's still like strides being made. And it's just like a reminder of saying, ‘Hey, look at what you've accomplished with what you've done.’ There's still more to be done.”

“It means women uplifting each other, becoming united and celebrating our struggles together.”

“I identify as non-binary … it’s important that no matter what you identify with, for there to be a month focusing on embracing women, embracing just what it means to be a woman … It's about embracing cultures related to women.”

“As a woman of color, as a woman and a person of color, those two things aren’t necessarily always celebrated and explored, and so having that time is really valuable. I also think that so much of history is women’s history that is overlooked or ignored or not celebrated the way it should be because it has that connotation of femininity, weakness or lack of value, so the fact that there is a month and that it’s for women is so cool.”

“Women’s History Month to me means recognizing the history of women being oppressed in our world and how far we’ve come, and acknowledging how far we still have to go, but still taking the time to celebrate the progress that’s been made.”

“It's evolved for me in a lot of ways. It's honoring the people that came before you, the women that have done amazing things and shattered the glass ceiling, but it's also admiring the present and current day women who are doing amazing things that we may not hear about as often or as frequently… I have a son, so I think a lot about what does this mean to raise him as someone that celebrates women and supports women. Even at his age, he's in first grade, but it's never too early to cultivate the acknowledgement of gender equity and to acknowledge that there are systems that are unfair.”

“It's great to set aside time on the calendar to recognize women leaders, and I would argue that all women are leaders. I have this belief that we all lead from wherever, whatever role we have, whatever position we have, we can make change … When we see people like ourselves, it gives us hope that we can achieve, we can lead.”

Who is a woman that you look up to?

“I really look up to all of the women that are in my family, so my grandma and then my mom, but also my three sisters. I only have three other siblings that are all sisters, so growing up with them, I really appreciate women's sports and I understood things from their perspective, and I'm looking up to them this month.”

“My mom is so strong and she motivates me every single day. She's a big runner, and seeing all her effort, physical and mental. I think it's really empowering to see her do and how she's a generation older than me and paving a good path for me.”

“I'm a really big Michelle Obama fan. I quote her kind of on a daily basis, my mom and I always say the quote, ‘When they go low, we go high,’ and I always remember that one. That's a big one for me.”

“My mom … just because she's my mom, she made a lot of sacrifices for me to be here.”

“I'd have to say Frida Kahlo. I've been looking more into art recently. I’m actually a bio major, but I find it fascinating and learning more about her life story and how she just persevered and continued doing what she loved really inspires me.”

“Maya Angelou … because when I was younger, I was really bad at reading and writing and all that stuff. I was always behind in my classes. And my grandma would give me poems by Maya Angelou and I would read those and that's how I became a better reader, a better writer, and I just really admire her and look up to her not only as a woman, but also an African American poet.”