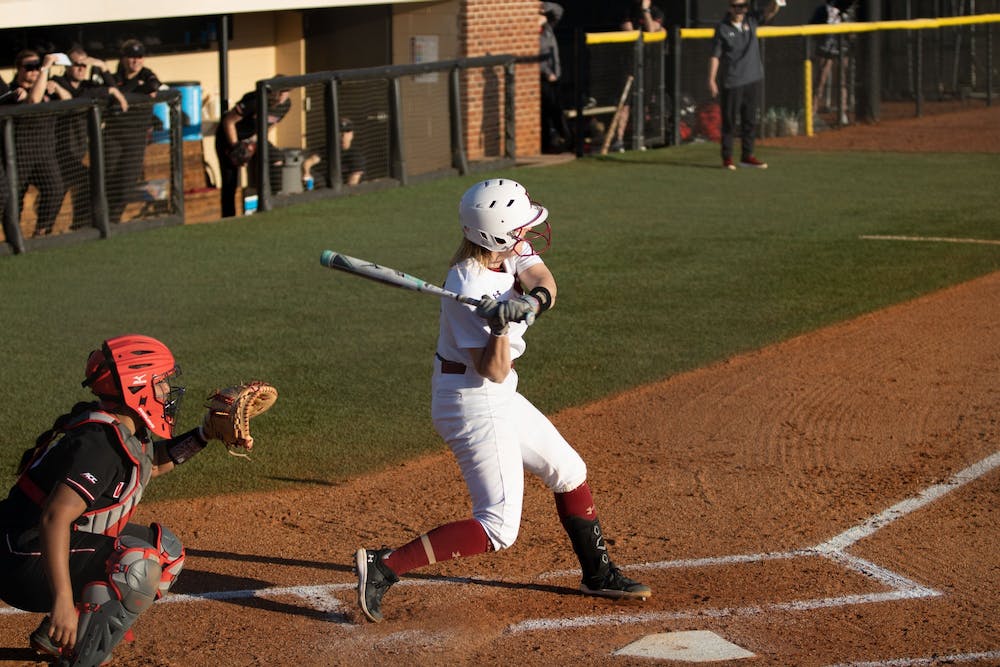 A North Carolina State University Wolfpack home run in the top of the seventh was too much for Elon University’s softball team to overcome, as Elon lost 6-4.

With the score tied 4-4 entering the seventh inning and NC State freshman Alaina Smith on first base, NC State graduate student Logan Morris hit her second home run of the game against Elon freshman pitcher McKenna McCard to give the Wolfpack the lead.

“She just missed it and that kid’s a great hitter,” Elon head coach Kathy Bocock said. “We’ve seen a lot of growth from McKenna since this fall and I thought she did a great job out there on the mound.”

McCard, who made her second start of the season tonight, finished with three strikeouts, four walks and six hits allowed on 119 pitches.

The Wolfpack took its first lead in the top of the third inning when Morris hit a three-run home run but Elon quickly responded with one run in the bottom of the fourth and fifth innings to take a 4-3 lead.

Junior catcher Carley Davis drove in Elon’s go-ahead run in the fifth inning with a single to left field. Davis said she was disappointed that Elon left seven runners on base but thought the team did a good job making adjustments at the plate against each of NC State’s three pitchers.

“Our offense did work really well,” Davis said. “We had people on, we just didn’t always get them in.”

NC State tied the game at 4-4 in the top of the sixth before taking the lead in the seventh. Murray did reach first base for Elon in the bottom of the seventh but a Wells strikeout and a flyout by senior first baseman Keagan Goldwait ended the game.

Elon outhit NC State 9-6 but left runners on base in five innings. While the Phoenix was unable to deliver hits in timely moments, Bocock said the team had good at-bats throughout the game to put pressure on the Wolfpack’s pitchers.

“We just knew we had to make contact, put the ball in play and that good things could happen for us, and we did,” Bocock said.

NC State entered the game with a 15-2 record, and with 30 home runs as a team entering the game, NC State ranked fifth in the NCAA in home runs. Bocock said she was impressed with Elon’s effort against another strong opponent.

“We did a great job, we competed against them,” Bocock said. “My team came out and they competed and we can’t ask them to do any more than that.”

This was Elon’s third game against an Atlantic Coast Conference opponent this season, as the team defeated the University of North Carolina at Chapel Hill on Feb. 16 and lost by just one run to Duke University on Feb. 23.

For Davis, the strength of opponents does not matter, as she said the team treats every game the same.

“We’re just trying to stay within ourselves,” Davis said. “Really just work together and push through it.”

Elon will host its third tournament of the season this weekend and will play five games from Friday to Sunday. Elon plays Michigan State University to begin the tournament on Friday. First pitch is scheduled for 1:30 p.m. at Hunt Softball Park.