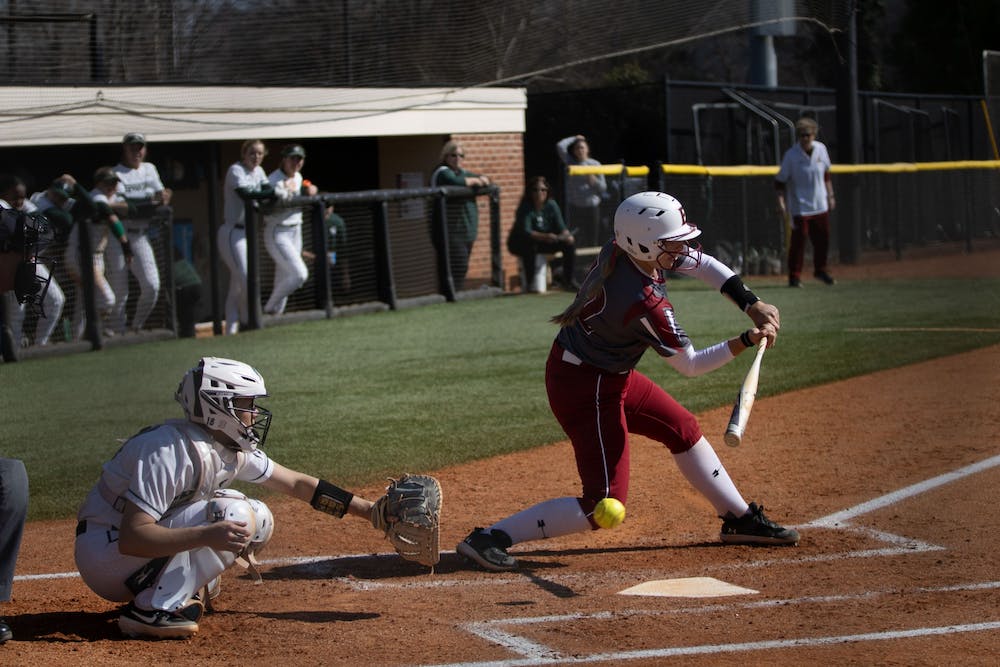 Elon University’s softball team split a doubleheader on Saturday at the Elon Softball Cardinal Invite, defeating the University of Detroit Mercy Titans 11-3 in game one and losing to the Michigan State Spartans 3-1 in game two.

In game one, Elon gave Detroit Mercy all they could handle, winning its Saturday afternoon game behind a six-run second inning and home run by senior designated player Megan White.

The mercy rule was evoked in the fifth inning, as the Phoenix led the Titans by eight runs. Freshman pitcher Isley Duggins allowed five hits and three earned runs in four innings as she earned her fourth win in five appearances this season. Duggins retired five of the first six batters she faced.

White hit a two-run home run to left field for Elon in the second inning, bringing in senior catcher Raelyn McGarry from third base. White’s first home run of the season capped off a four-hit, six-run inning for the Phoenix.

Detroit Mercy graduate student Liz Murphy pitched the entire game for the Titans. Murphy was gashed for 12 hits and 11 runs, with five of the hits going for extra bases. Murphy is 0-3 this season in three appearances.

In game two against Michigan State, Elon fell behind 1-0 in the top of the first inning but quickly tied the game in the bottom of the frame, as sophomore third baseman Gabi Schaal hit her fourth home run of the season to make the score 1-1.

However, the Phoenix did not score again and tallied just one hit in the final five innings.

Graduate student pitcher Alexa Nemeth started for Elon and pitched five innings. She allowed two runs, including Michigan State’s go-ahead RBI single in the top of the fourth. Freshman pitcher Taylor Cherry entered in the sixth inning and finished the game for Elon.

Elon had three errors, tied for a season-high. Michigan State’s third and final run was the result of a throwing error by Cherry.

Elon did not put a runner on base in the final inning, as redshirt senior pitcher McKenzie Weber and senior right fielder Drew Menscer struck out to end the game.

Elon finishes the tournament tomorrow with games against Detroit Mercy and the East Carolina Pirates. The games will begin approximately at 12 p.m. and 2:30 p.m.