Freshman pitchers playing key roles for the team this season 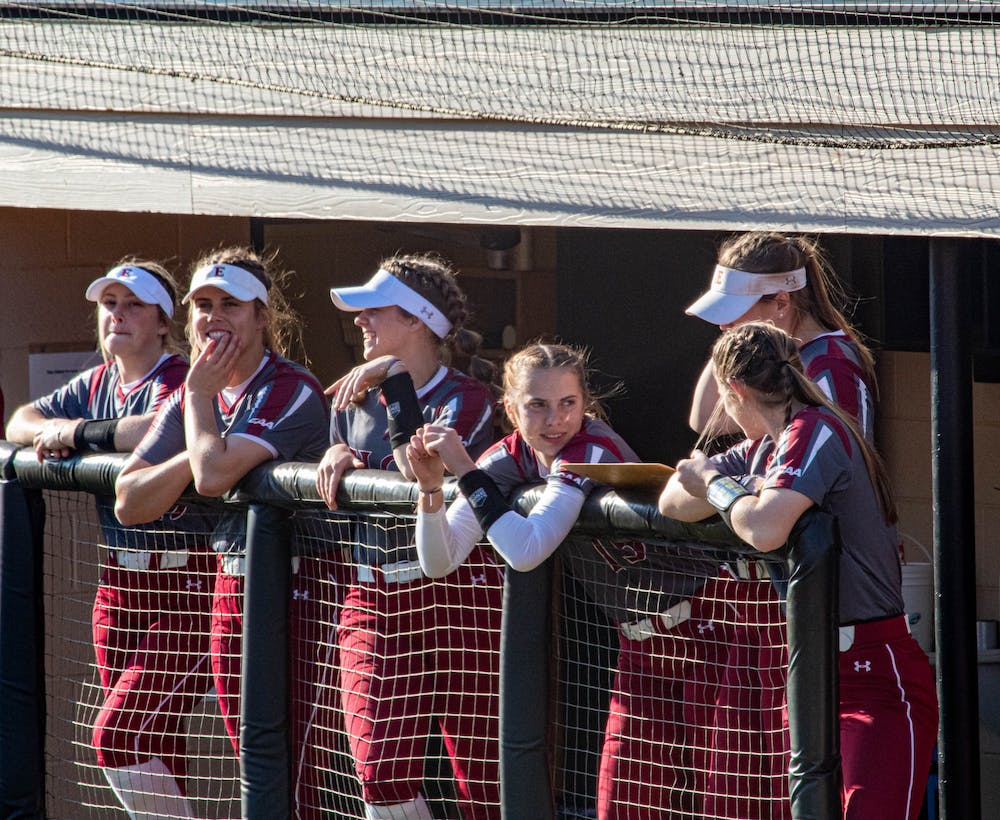 
Elon softball players watch from the dugout at Hunt Park on Feb. 11 during the game against IUPUI.

With seven out of 22 players on Elon University’s softball team being freshmen, new players have been put in leadership roles this season, according to head coach Kathy Bocock.

After losing three of its best players from last season - Mekayla Frazier, Kenna Quinn and Ally Repko - Elon has turned to freshmen early in the season to play big roles with the team, something the Phoenix has not traditionally done.

She said she has had relationships with all freshmen since they were young, especially noting the Burlington resident Isley Duggins, who Bocock has been working with since she was seven years old.

Each of the freshmen consistently attended one of her offseason camps, which invite high school players to train with Elon’s softball team. Bocock said attending these camps made the players stand out in the recruiting process.

“All seven are very talented in their own way,” Bocock said. “They have seven different personalities, and that's what makes it fun to watch too.”

Taylor Cherry, who has 30 strikeouts and a 4.6 earned runs against average in six pitching appearances this season, emphasized how comfortable she was with this team immediately.

“All the girls are so welcoming and it just felt like home from the second I started here,” Cherry said.

“Softball is all about communication and the upperclassmen on this team have shown me how important that is especially in the circle,” Cherry said.

Duggins, who played softball at Southern Alamance High School, said though the older players made her feel comfortable too, she was happy to have six other freshmen teammates as she joined the team.

“The girls are genuinely the nicest and are very inclusive,” Duggins said. “I didn't really know the girls well, so it was really nice right away to see the older girls telling​​ Taylor and I when pitching that they have our backs. Coming from upperclassmen that really means a lot.”

For Duggins, the most important part about transitioning from high school to college softball is staying focused on yourself rather than what the batters are doing.

“I've always tried not to focus on the batter, which I think has carried over here and helped me a lot,” Duggins said. “Pitching is all mental and going in with a strong mentality is key. Taking things pitch-by-pitch and focusing on you and the catcher.”

The motto for Elon’s softball team this season is “unbreakable.” Bocock said the team’s freshmen embody that motto and have built strong bonds with the team’s junior and senior players.

“Being unbreakable is something we have really tried to focus on as a team,” Bocock said. “The freshmen and the upperclassmen have united and created a team chemistry that builds on the field and off.”

Bocock said the team’s freshmen have earned the trust and respect of the coaching staff and their teammates, praising their respect and positive attitude. She added their growing confidence and hard work in practice also played a large role in building trust, which she believes will help the team’s performance this season.

“The more confident you can be, that helps everybody be confident,” Bocock said. “Opportunities are not being given to them. They are all earning every bit of it.”