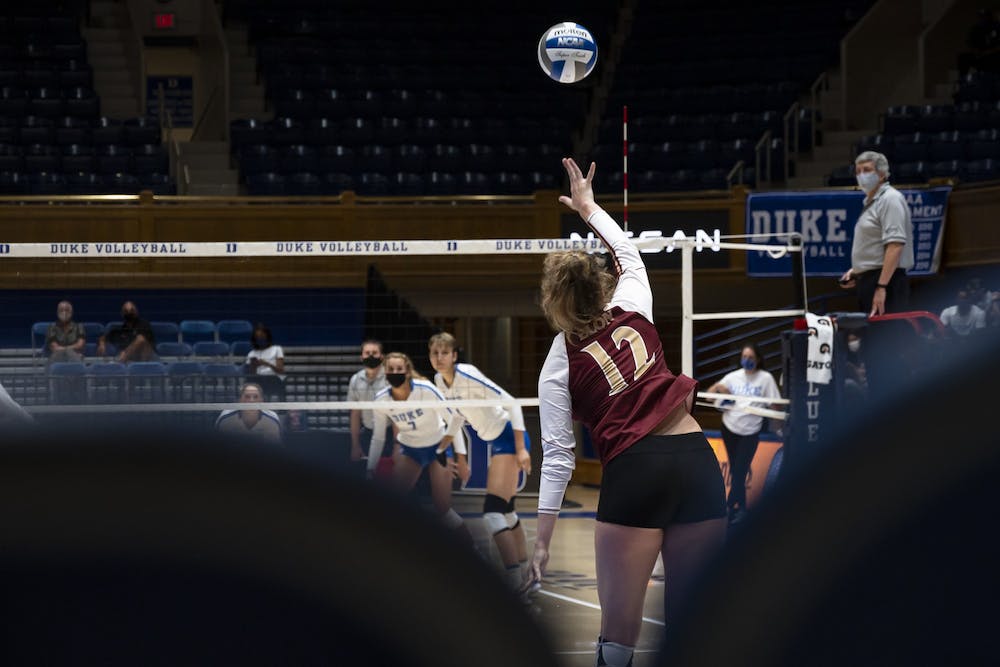 In her time as head coach of Elon women’s volleyball, Mary Tendler never had a player on her team elect to play a second sport. This year, Kellyn Trowse, outside hitter from Tampa, Florida has become the first one.

Described by Tendler as having “no fear on the court,” Trowse spent four years giving her all to the Elon women’s volleyball program. As a senior, the team finished 17-11 and 11-5 in the Colonial Athletic Association, the team’s best mark in the eight years the program has been a member of the Colonial Athletic Association. The Phoenix fell short in the CAA championship, losing in a fifth set to the top-seeded Towson Tigers, 15-11.

“The fact that we made it farther than we ever have in Elon volleyball history means a lot to me,” Trowse said. “However, we didn’t win the finals, which was our ultimate goal. I’m really, really competitive, so the mindset is always to win, or at least do the best I can.”

According to Trowse, her competitive nature has been part of her life for as long as she can remember. A three-sport athlete in high school, she participated in volleyball, basketball and track and field. She captained her high school basketball team her senior year and also played on an Amateur Athletic Union basketball team through her junior year.

“It’s always been my first love in terms of sports,” Trowse said.

As soon as Trowse was on campus for her freshman season of volleyball, she told her volleyball coach that she had a serious interest in getting involved with the basketball team.

“She was a little bit not super excited to hear that at first,” Trowse said. “But I just kept telling her every year that I wanted to play basketball.”

When Trowse heard from a friend that Elon University women’s basketball head coach Charlotte Smith was holding open tryouts for a walk-on spot, she was hesitant. It had been nearly five years since her senior season of high school basketball. Trowse said she felt like she hardly had a shot. However, Smith was impressed with Trowse’s skills and she was offered the spot on the team.

“I knew when she was trying out that she would be the perfect addition to our family,” Smith said. “I can’t imagine this team without her.”

Though Trowse’s role has been mainly as a practice player for the Phoenix, she said she has worked just as hard as her teammates. As a player joining the team long after preseason had ended, Trowse had a lot of catching up to do.

“On the first day, they told me I had 24 pages of sets to learn,” Trowse said. “I’m about six pages in and I still don’t know the rest.”

Smith said that her competitive nature has inspired her to be tough and she has been able to contribute tremendously to the team.

“She has done it with a lot of grace,” Smith said. “At this point in her college career, she could be relaxing and enjoying a lot of freedom in an offseason, but she chose to do more and be more. It speaks volumes about who she is as a person.”

According to Tendler, the biggest piece that stands out in Trowse’s career is her attitude and effort — making her the ideal teammate.

“She does all the right things. She comes to practice every day ready to go. She makes the people around her better players with what she’s able to do and how she encourages them,” Tendler said.

Smith said she’s had the same effect on the basketball team, even though she’s only had a few months to spend with them.

“We love Kellyn. She is a beautiful person inside and out and only enhances our chemistry. The girls absolutely love and adore her,” Smith said.

According to Trowse, regardless of her stats or the team’s record at the end of the season, making herself and her teammates better is her ultimate goal. Trowse said she considers making the basketball team her senior year a remarkable achievement.

“When they told me, I was in tears,” Trowse said. “It’s been my dream to play on this team since before I got to Elon, so this is a dream come true. I keep saying it over and over, and sometimes I wake up in the morning and can’t believe that I get to be a part of the team.”