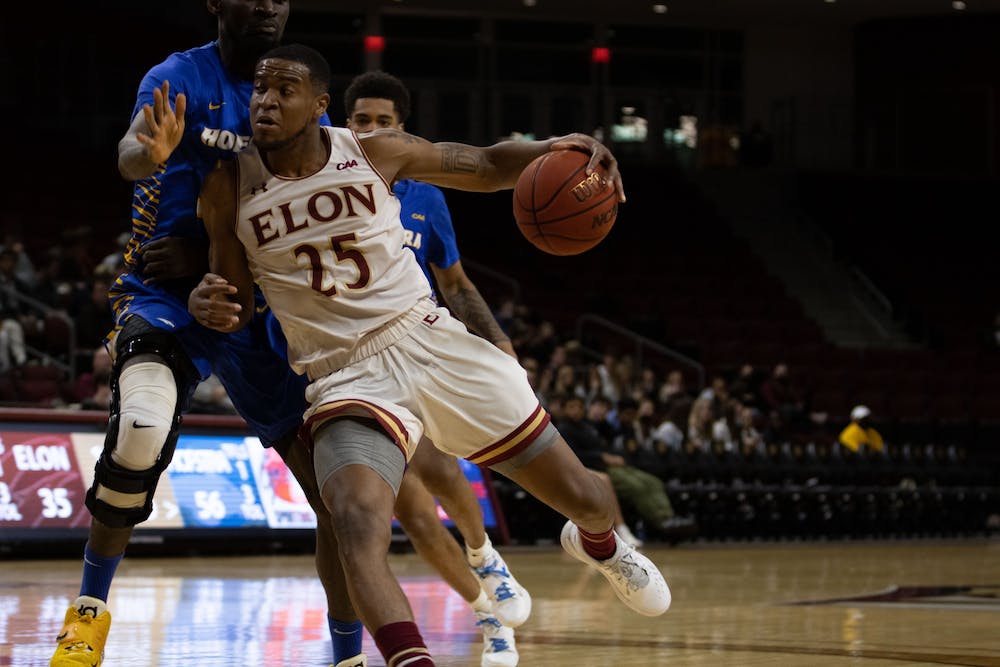 Hofstra led 8-7 early but seven straight points from redshirt junior center Andrew Junkin put Elon ahead 14-8 just under eight minutes into the first half. The Phoenix did not trail after Junkin’s scoring run.

The Phoenix opened the second half on a 13-0 scoring run, beginning with six straight points from Burford and ending with a corner three-pointer from senior forward Chuck Hannah. Elon took a 31-point lead, its largest of the game, with just under two minutes remaining and finished off the dominant victory with a final basket from freshman forward Sam Sherry.

Burford led the team with 21 points, his third consecutive game scoring at least 20. McIntosh scored 18 points and made four three-pointers. Junkin posted a double-double with a career-high 16 points and 10 rebounds in just 23 minutes.

Junior guard Zac Ervin made his first start since Jan. 12 against the University of North Carolina Wilmington, scoring two points while shooting 1-5 from the field.

Elon outrebounded Hofstra 55-26, its largest advantage in any game this season. Elon’s defense also held Hofstra to just over 29% shooting for the game, marking the first time this season Elon has held an opponent under 30% from the field.

The win avenged Elon’s 94-67 loss to Hofstra on Feb. 15 and secured Elon a first round bye in March’s CAA Tournament. Elon — now 6-11 in CAA games — is eighth in the current standings and will be the seventh seed in the tournament, as seventh place James Madison is not eligible to play in the event after the school announced it would join the Sun Belt Conference last November.

The loss clinches the third seed in the tournament for Hofstra. The top eight teams at the end of the regular season get a bye to the second round of the event.

Elon plays its final regular season game on Feb. 26 at Northeastern University. Tipoff is scheduled for 4 p.m. The game will air on CBS Sports Network. Elon won the first matchup of the season 79-62 on Dec. 29.