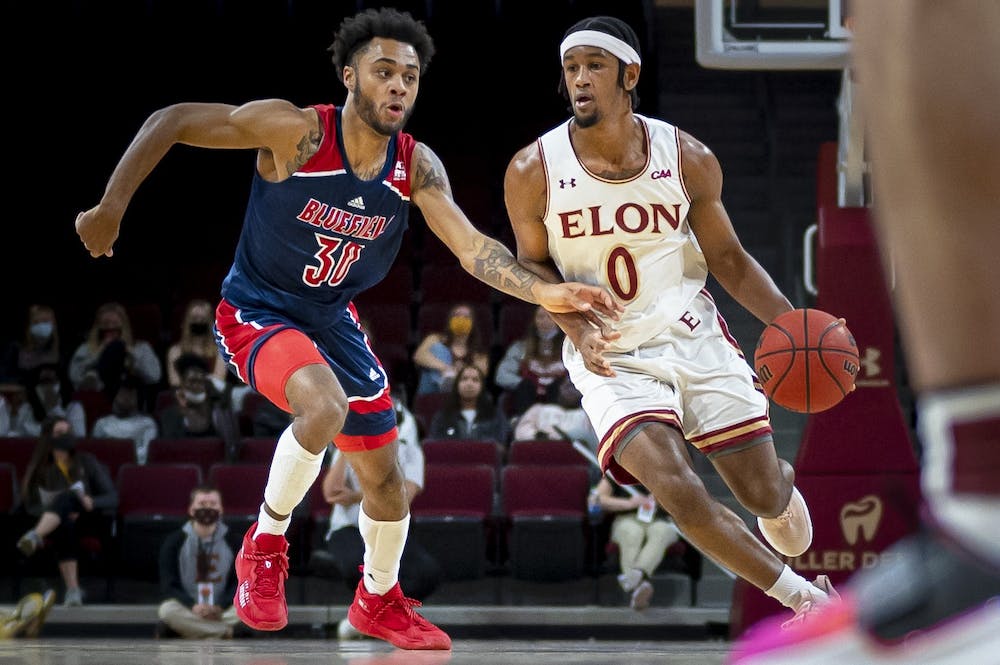 Photo by Luke Johnson | Elon News Network
Elon University junior Hunter McIntosh dribbles the ball down court during a game against Bluefield College in Schar Center on Nov. 14. In their third game of the year, the Phoenix secure an 89-72 victory. by Luke Johnson

The Elon University men’s basketball team won its Colonial Athletic Association opener, defeating the Northeastern University Huskies 79-62 on Dec. 29 to improve to 4-10 on the season.

Additionally, a strong defensive effort helped the Phoenix maintain a big lead and the team also outrebounded the Huskies 38-30. The Phoenix went into the locker room with a 24 point halftime lead over the Huskies and never trailed throughout the contest.

Head Coach Mike Schrage said he takes great pride in the defense he and his coaching staff have built in the short past two years in addition to Elon’s natural offensive abilities.

“Defensively, we're getting back to being the grimy tough team that we need to be night in and night out,” Schrage said. “What’s going to put us in position every night to have a chance to win is that mindset on the defensive end.”

Burford had a strong all-around game, adding five rebounds and three assists to go along with his team-high 23 points.

“Whatever it takes to win, that is the type of player I am,” Burford said.

Schrage said he sees Burford and McIntosh as one of the most reliable back courts in the conference. While the two led the team offensively against the Huskies, Schrage said McIntosh also drew two charges in the second half to spark the team defensively.

“Hunter McIntosh made big plays, but not just shooting the ball. He always makes timely shots. That's who he is,” Schrage said. “But he took two big time charges as they were making runs in the second half. When arguably your best player is making those kinds of plays, you've got a great culture and a great program.”

Despite going 3-10 in the non-conference season, Schrage knows the rewards his program will reap from playing teams in larger conferences go far beyond that record.

“The schedule we’ve endured, we have been putting on the weighted vest and the ankle weights,” Schrage said. “It has allowed us now to understand who we are and how together we have to play on an offensive end.”

The Phoenix return to action at Schar Center on Friday, Dec. 31 for their second conference game against the Hofstra University Pride.