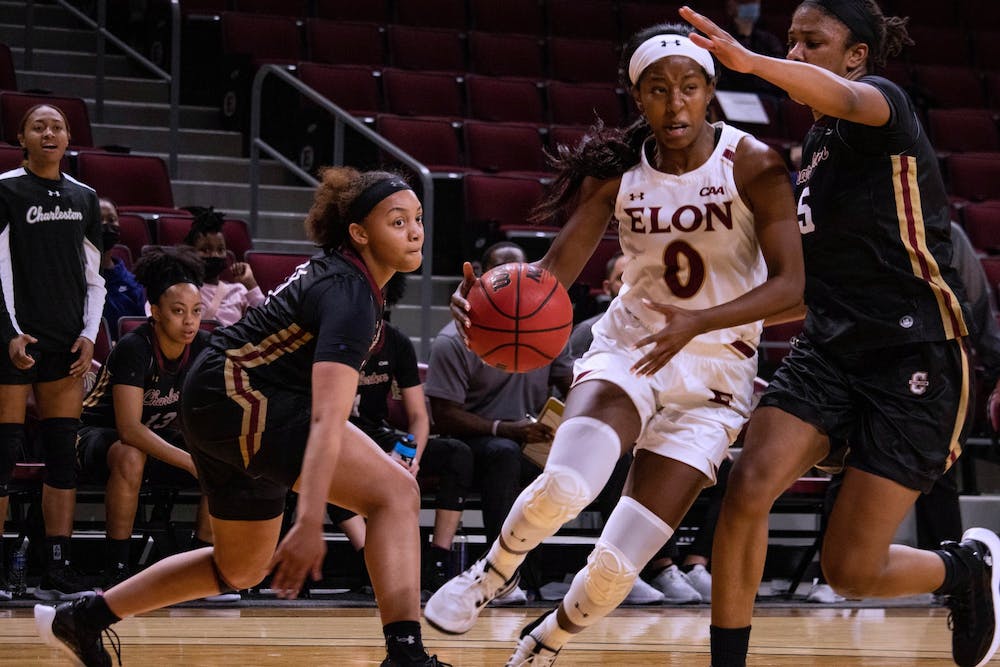 Photo by Joseph Navin | Elon News Network
Elon Senior Brie Perpignan dodges players from the College of Charleston in the first half of the game on Jan. 14 inside the Schar Center.

Boston — Down seven points entering the fourth quarter against the Northeastern University Huskies, the Elon University women’s basketball team was still within striking distance of a comeback victory. However, a sluggish final frame doomed the Phoenix, as the team was outscored 20-12 to lose 68-52 on Jan. 21.

The Phoenix fell behind 9-0 in the opening minutes, and although the team briefly took a lead late in the first quarter, the Huskies ended the opening period ahead 20-16.

Both teams struggled offensively in the second quarter, combining for just 22 points, and Northeastern scored 13 to take a 33-25 halftime lead. Senior guard Brie Perpignan kept Elon afloat in the first half, putting up 16 of the team’s 25 points through the first two quarters.

Elon rallied late in the third quarter, as baskets by Perpignan and sophomore forward Ajia James cut Northeastern’s lead to just two points with just over a minute remaining. This was as close as the Phoenix came for the rest of the game, as a quick 5-0 Huskies run in the final 30 seconds quelled the Phoenix’s momentum.

Northeastern extended its lead to 13 in the opening minutes of the fourth and maintained a double-digit advantage for the majority of the quarter.

Perpignan led the team with 19 points but had just three in the second half and did not attempt a shot in the fourth quarter. James scored 10 points and grabbed a team-high seven rebounds. The Phoenix shot 34% from the field and went just 4-23 on three-point shots.