Despite a strong first half, the Phoenix could not out shoot the Dragons in the physical game, ultimately costing the team its CAA winning streak 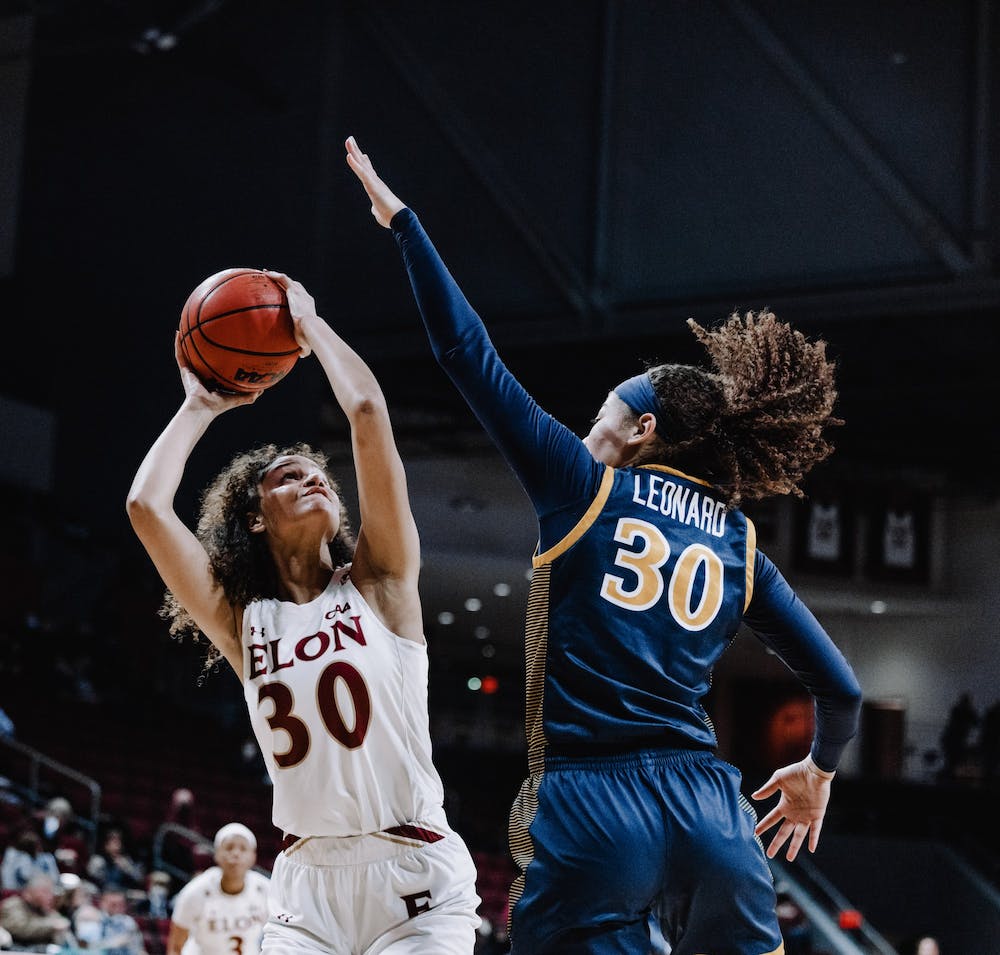 Tyja Traore goes for a layup just before the half. The Phoenix would go on to lose 60-72 against Drexel on Friday night.

In a physical matchup against the Drexel University Dragons, the Phoenix came up short, losing both the game and the team’s Colonial Athletic Association winning streak, 72-60.

Elon earned its first road conference win this week, beating Hofstra University on Jan. 23, 62-58. Drexel entered the game atop the Colonial Athletic Association standings with a 6-0 record in conference games.

Senior guard Kayla Liles — who earned a career and game-high 23 points against Hofstra — started out strong, scoring the first three of the game. Following Liles was redshirt senior transfer guard Peyton Carter, who also stood out in the Phoenix’s last game against Hofstra and scored in the first half against the Dragons, pushing Elon’s lead further.

Both teams battled hard during the first half, keeping the contest close and physical. In the first half alone, Drexel had seven personal fouls and Elon had nine. While Drexel held Elon to a close contest in shooting throughout the first half, it was not enough, as the Phoenix maintained a 23-17 lead.

Heading into the second quarter, the Phoenix continued to hold a strong lead over the Dragons. Fans for both teams could be heard throughout the stands in Schar Center throughout the game, dubbed “Kid’s Day” for Elon. Senior guard Brie Perpignan scored a team-high six points in the second quarter, as the Phoenix outscored the Dragons 12-10 to take an eight point lead at the half.

The Phoenix let its lead slip at the top of the third quarter, as Drexel managed to put up 14 points in the first five minutes. The Phoenix battled back hard with strong offense and points by Carter and Perpignan. Ultimately a lack of strong defense from Elon and Drexel making eight out of nine free throw attempts put the Dragons ahead 55-49 at the end of the third quarter.

Elon had several chances to score early in the fourth quarter, but could not convert. The Phoenix’s offensive struggles continued throughout the quarter, as the team scored just four points in the first six minutes of the period. The Dragons scored 10 points, led by senior guard Hannah Nihill.

Smith said the biggest struggle the Phoenix faced was rebounding. She said Elon aims to have 40 rebounds a game, but the Phoenix only managed to put up 25, compared to Drexel’s 39.

“Rebounding is something you can control,” Smith said. “If you come up 15 rebounds short, you don’t give yourself a chance to be successful.”

While Drexel graduate forward Tessa Brugler led the team in the first half with six out of 11 shots made, the fourth quarter was dominated by Nhill, who scored a team-high by making eight of fifteen attempted shots for 21 points and drew nine fouls. The crowd voiced discontent regarding many calls throughout the game, particularly with fouls called on the Phoenix.

With just under four minutes left in the fourth quarter, junior forward Maya Johnson made a free throw, bringing the Phoenix within 10 points of victory. Fouls plagued the Phoenix throughout the quarter however, pushing the team farther and farther away from victory. In the end, Drexel battled hard in the fourth quarter, scoring 17 points and ultimately winning the game, 72-60.

Perpignan finished with a team-high 22 points, but no other Elon player had more than eight as the team shot just 37% from the field.

Elon, now 2-4 in the CAA, is back in action Jan. 30 at 2 p.m. at Schar Center against the University of Delaware Blue Hens, who hold a 5-1 CAA record with the only loss against first-place Drexel.