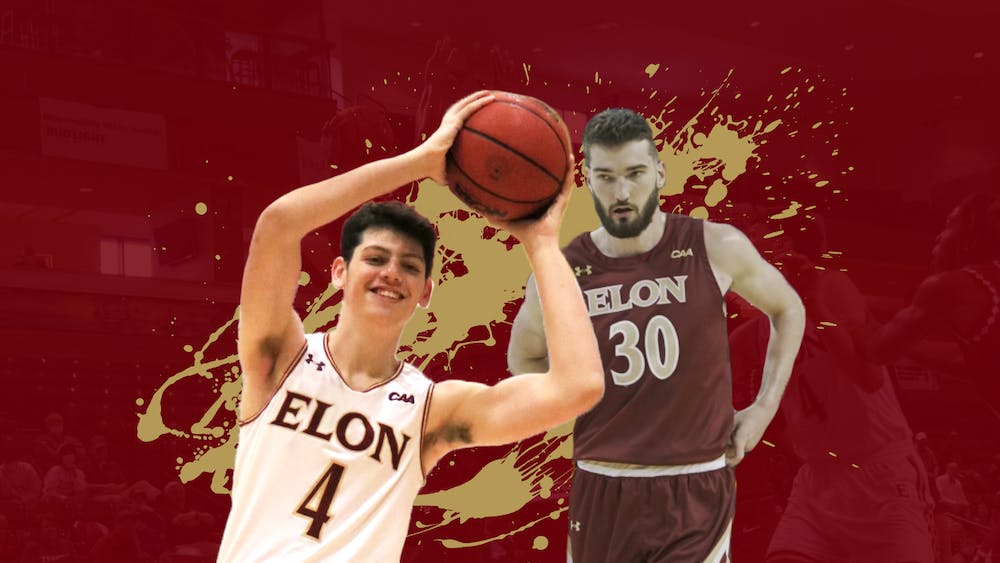 Photo by Nyah Phengsitthy | Elon News Network
Coming into the 2021-22 men’s basketball season, Elon welcomes five new players to the team. Two of these additions - senior Andrew Junkin and freshman Sam Sherry - have the size and length the Phoenix was looking for.

“I feel like we have a four-headed monster, at the center position. They’re all a little bit different,” Schrage said.

Coming into the 2021-22 men’s basketball season, Elon welcomes five new players to the team. Two of these additions - senior Andrew Junkin and freshman Sam Sherry - have the height the Phoenix was looking for.

“We will see how much he can help us game in and game out but day in and day out just to have a guy of that size, and that strength is important,” Schrage said about Junkin.

Junkin, an incoming transfer from Mississippi State University, is exactly seven feet tall and said he will use his experience from playing in the Southeastern Conference to add to the team. He said he has already found a family and home with this team.

“Some of the closest teammates I’ve ever had, everybody here is just for one another 100%,” Junkin said. ”We’re a family to the fullest extent”.

Junkin said the coaches have already told him what his role is for this season. They will rely on his toughness and experience from playing against players in one of the NCAA’s toughest conferences.

“That’s my whole deal to just be tough, coming from an SEC school playing against some of the best of the best at practice,” Junkin said.

Another addition to the Phoenix is Sherry, a 6’10” center from Mechanicsburg, Pennsylvania. He said he is eager to contribute to the team and believes his versatility can help the team offensively.

“I think I have a good face up game, and I can play not just on the post but out on the perimeter as well,” Sherry said. “I just want to help the team in any way possible.”

Sherry said the coaches are looking for him to develop in many ways this season, and to contribute whatever he can off of the bench.

Schrage said he believes the addition of Junkin and Sherry to the frontcourt will help increase the team’s presence down low compared to last year. Last year the Phoenix averaged only 2.1 blocks and 34.3 rebounds per game last year and Schrage said these additions will help the team improve in these areas.

“It makes practices flow better when you’ve got several pieces at that center spot. They give us a lot of size, length, and depth,” Schrage said.