The Phoenix lagged behind in shooting, ultimately costing them the game 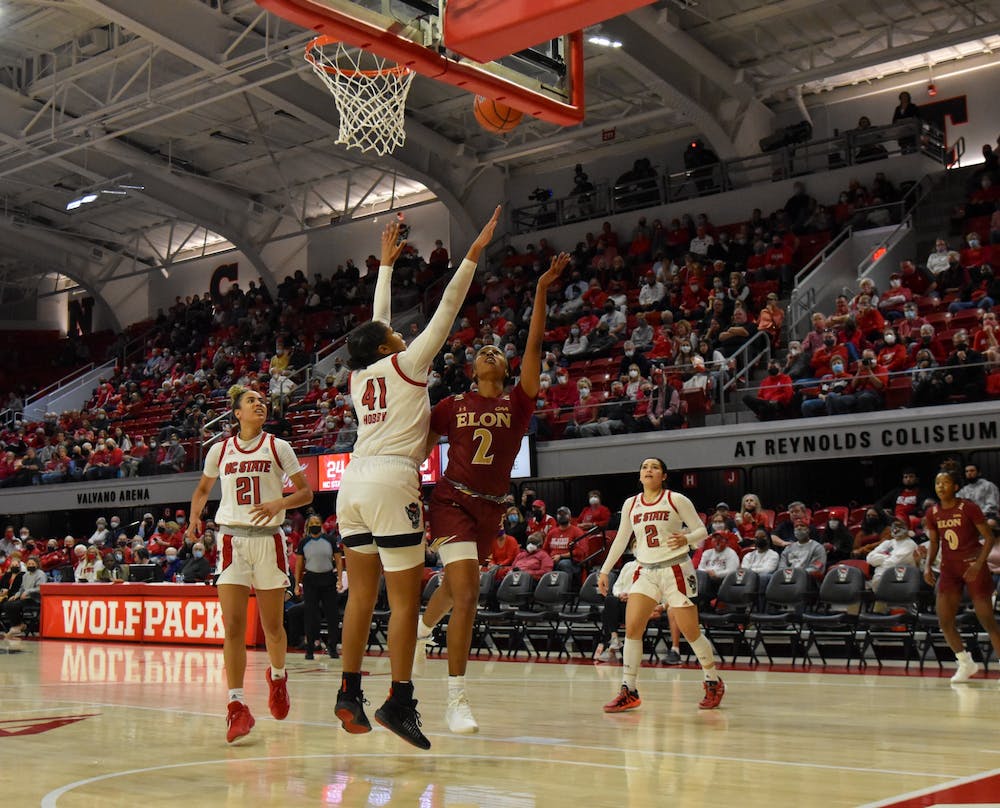 NC State was 7-1 heading into the matchup and was named the preseason favorite in both the Atlantic Coast Conference’s coaches and the Blue Ribbon panel polls. Despite improving to 5-1 on the season against NC Central on Nov. 29, the Phoenix failed to outshoot the Wolfpack, ultimately costing the team the game.

“It’s quite the feat to play number one and number two within the two week stretch, but we’re always up for the challenge,” Head Coach Charlotte Smith said. “I’m very proud of our team. I felt like they went out and they fought for 40 minutes, and there’s a lot of things that we can take away from this game to improve.”

While the game started off with senior guard Brie Perpignan scoring less than two minutes in, NC State quickly found a rhythm, ending the first quarter up 16-9. In the second quarter, Elon struggled to keep up with NC State junior center Camille Hobby and sophomore guard Diamond Johnson. Hobby shot 2-3 throughout the first half and Johnson put up nine of NC State’s 36 points.

Senior guard Kayla Liles led Elon in the third quarter, making seven free throws in the period. Both teams played aggressively throughout the quarter, with five fouls a piece. With just eight seconds remaining, the Wolfpack closed out the quarter with two free throws, ending ahead 61-36.

Both teams started the fourth quarter strong. Redshirt senior guard Peyton Carter provided a late spark for Elon, scoring five consecutive points to bring the score 69-43 with 4:34 remaining. However, the Phoenix shooting percentage did not improve much over the course of the second half, going from 26% to only 28%.

“It’s games like this that only challenge us to get better,” Smith said. “We’re excited about the opportunity to go back to Elon and watch the film and figure out how we can be a better team from this.”

With just one minute remaining, Carter was knocked to the ground, hitting her head and leaving the game. Carter did not return to the game.

Playing its next game after finals week, Smith said she hopes the team can go into the game well rested and 100% focused on basketball.

“With exams, that’s a lot of emotional fatigue and I’m sure we probably dealt with a lot of that today, just the pressure of exams,” Smith said. “Hopefully we can get good rest, get through our exams and just have an opportunity to be able to focus.”

The Phoenix are now 5-2 heading into the team’s matchup against Davidson College in Schar Center on Dec. 12.