Phoenix set for first CAA Tournament match since 2017 against Northeastern 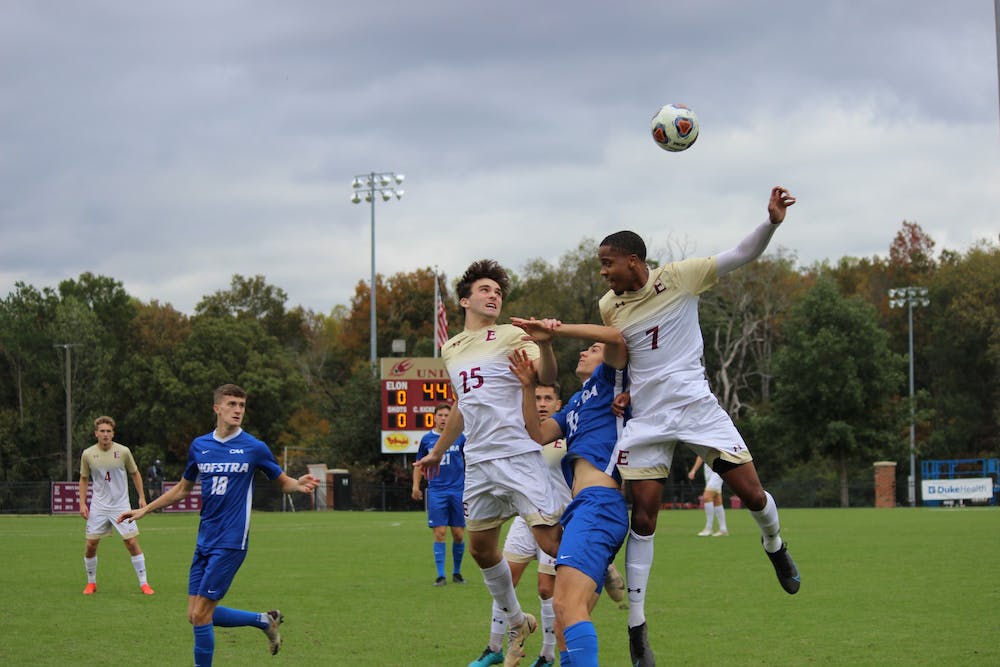 
Sophomore Ben Rosenblatt and senior Jalen Weatherspoon jumping in the air at the Elon vs. Hofstra soccer game on October 30th.

Elon University’s men’s soccer team will play its first Colonial Athletic Association Tournament game since 2017 on Thursday when the team takes on the Northeastern University Huskies. The Phoenix is the number three seed in the tournament and is looking for its first ever win in the event since joining the CAA in 2014.

Only four teams will participate in the tournament this season, down from the usual six. Head Coach Marc Reeves said the team’s goal all season was to qualify for the event and said doing so this year is a testament to the team’s focus and execution, especially late in the season.

“We’ve got a group that’s preparing well, playing well and some of our best guys are really at their best right now, which is fantastic,” Reeves said.

After falling behind 2-0 at Northeastern on Oct. 16, Elon battled back, scoring a goal late in the first half and early in the second half to tie the score. The teams eventually tied after neither could find a game winning tally in overtime.

The Huskies scored 40 goals this season, tied for the most in the conference. Northeastern’s offense is one of the most balanced in the league, as four players scored six goals in the regular season.

“They’ve got some great threats up front,” Reeves said. “They have some great goal scorers and we need to make sure we’re set up well for that.”

Elon played a challenging schedule this season that included road games at Duke University and West Virginia University, both of whom are in this week’s United Soccer Coaches Poll, a weekly ranking of the top 25 teams in the country. Reeves said playing so many tough opponents has prepared the team for this tournament.

“We’ve played some good opponents, gone to some tough places and it’s prepared us to get those necessary wins,” Reeves said.

Reeves said he is happy that his senior class gets the opportunity to compete in the tournament and is hopeful the team can extend its season by winning it.

“I’m really pleased that we’re in it for them,” Reeves said. “I’m glad for them that we are extending the season and have something significant to play for.”

The winner of the CAA Tournament receives an automatic bid into the NCAA Tournament, which Elon last qualified for in 2015 as an at-large selection.