The group continues to work in an off year, focusing on more social events 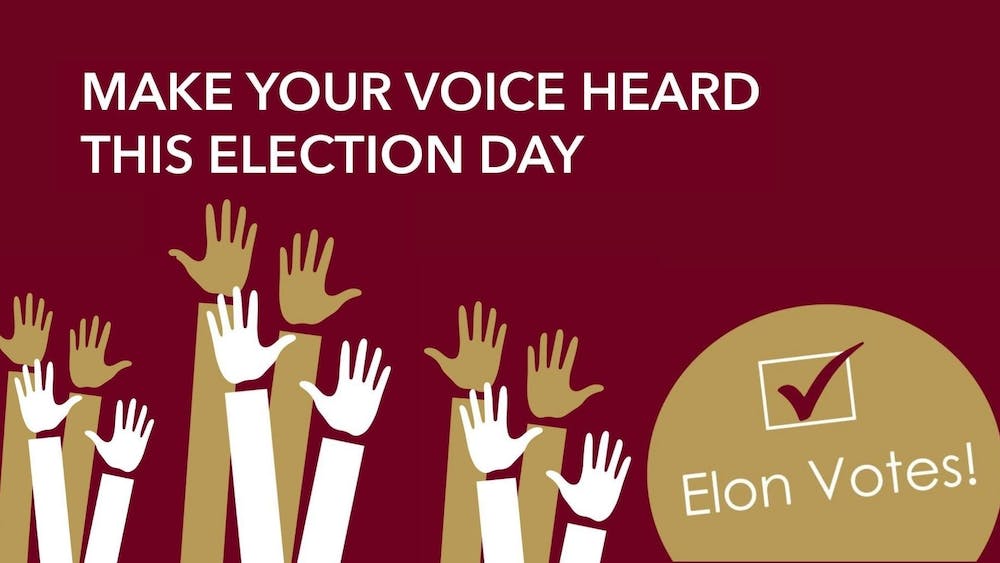 Photo by Kyra O'Connor | Elon News Network
Elon Votes! spends each election year providing car rides to the polls, assisting with voting registration and educating others on the importance of participating in an election. This year with no presidential election to prepare for and no census to think about, Elon Votes! has an entirely different focus.

Elon Votes! spends each election year providing car rides to the polls, assisting with voting registration and educating others on the importance of participating in an election. This year with no presidential election to prepare for and no census to think about, Elon Votes! has an entirely different focus.

Elon Votes! has shifted its programs to more social events, such as watching an episode of Parks and Recreation and then discussing the importance of local politics. Trevor Molin, director of civic engagement for the organization, said local politics is now a big focus for Elon Votes!, especially with no presidential race this year.

“It's really interesting because, especially in 2021, where you have two governor races happening and then you know a ton of local races... it's not in the same way where we can just blast out to all students that you have an election like a lot of students probably don't,” Molin said.

Senior Sophie Gerth, lead voting ambassador for Elon Votes!, said despite the absence of the large-scale events that focus on an election, the student organization continues to seek and create conversations on campus.

"Our goal is to transform campus culture to be politically aware,” Gerth said.

Voting ambassadors like Gerth engage with the student body trying to reach a variety of people. According to Gerth, Elon Votes! Is open to all majors and is working to increase its membership with people across a variety of interests.

“At times, you can go to spaces of campus that are not politically aware or having these critical discussions," Gerth said. "Our goal is to kind of infiltrate all these spaces of campus and make civic engagement, something that everybody participates in.”

One way Elon Votes! is able to help get information to students about local elections is using the program National Study of Learning Voting and Engagement. NSLVE was created by the Institute for Democracy and Higher Education atTufts University and supplies tailored reports to the over 1,100 colleges and universities who use this data to create civic change within their own campuses.

NSLVE data shows voting numbers of each participating school, specifying how  students voted and where students are registered to vote. NSLVE can target specific groups of students to help make sure they understand every aspect of these elections and voting such as how to request an absentee ballot.

Elon Votes! will continue to host events like Deliberate Dialogues to foster civic engagement Most recently, they hosted an event, Unpacking Cancel Culture, where professors spoke about cancel culture, the idea of separating the art from the artist and their thoughts regarding the productivity of cancel culture.

These events are focused on helping better inform Elon students on current issues and teaching them how to have difficult conversations, according to Molin. A core aspect of Elon Votes! is remaining non-partisan, and these events are meant to inform and bring students together rather than force a specific viewpoint as Gerth said.

Gerth said her involvement in Elon Votes! has shown progress, where she can finally see a tangible difference in the work she put in. One way was that Elon was fifth in the nation for TurboVotes, meaning that Elon had the fifth highest amount of new voter registrations percentage wise and were ninth in the nation based off of total signups. Looking at total signups, Elon was behind universities such as Harvard, Stanford and the University of Chicago, all schools that have considerably larger student bodies and are considered an Institute of Politics, meaning that they have more resources related to civic engagement built into their schools.

“It’s just the idea that everyone should be able to vote, everyone should have the tools to do so, and that we can work hard and collaborate to make that more accessible to people,” Gerth said.

Molin and Gerth are both optimistic about the future of Elon Votes! and believe in the work they are doing.

“Every year we wait for data to come back, about how we did in the election, you know like how many students registered to vote, how many actually showed up. We haven't got that data back yet, because it just takes so long for the whenever the organization that compiles all this information to process. But I will say that like, I just felt this amazing energy on campus last election,” Gerth said.

Elon Votes! has been building on this momentum from last year and hope to carry that same energy through the work they continue to do this semester.

“This has gone back so many years, and so many students and it’s a privilege to be able to continue that,” Gerth said. “I do feel like we’re in the midst of a culture shift on campus.”