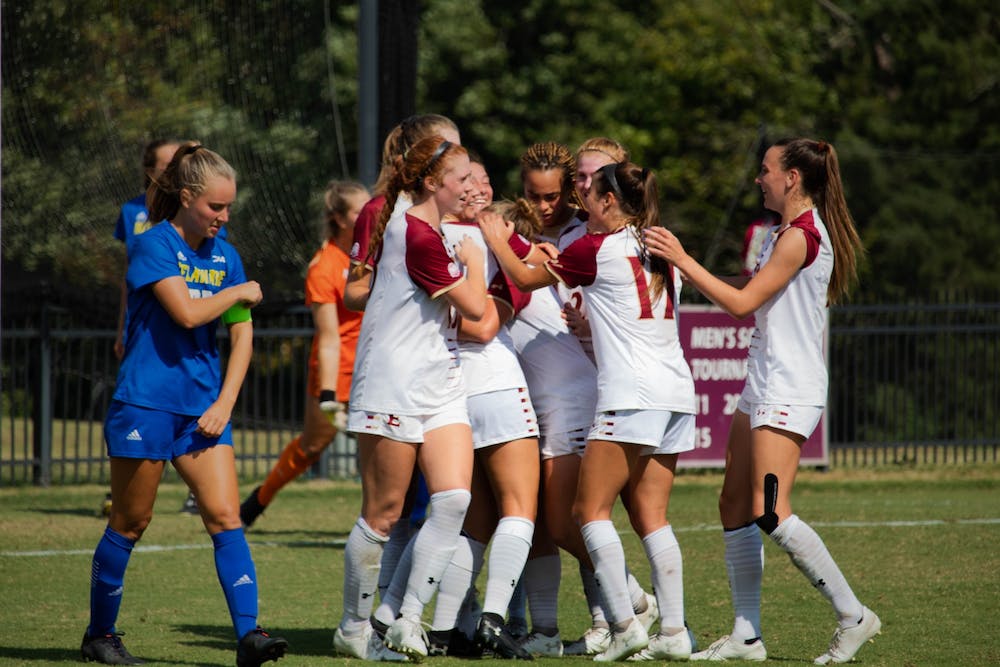 
The Elon women's soccer team celebrated after making their sole goal during the game against Delaware on Oct. 3.

Philadelphia, PA — After its historic run to its first NCAA Tournament since 1999 earlier this year, Elon University’s women’s soccer team will miss out on the postseason. Despite a dramatic 2-1 victory over the Drexel University Dragons in its final match of the regular season, the Phoenix failed to qualify for the CAA Tournament.

Senior midfielder Abby Fusca scored in the 97th minute to win the match for Elon. However, because of a game nearly 300 miles away in Williamsburg, Virginia, the Phoenix’s postseason hopes had already disappeared minutes before Fusca’s goal.

While Elon was beginning its overtime period against Drexel, the Northeastern University Huskies wrapped up a 1-0 win at William & Mary to clinch the fourth and final spot in the CAA tournament and officially eliminate the Phoenix from postseason contention.

The Phoenix entered the day in fifth place in the CAA standings, needing a victory against the Dragons and a loss by Northeastern to qualify for the conference tournament. While Elon did what it needed to do against Drexel, it was ultimately too little, too late.

Senior forward Carson Jones scored in the 10th minute to put the Phoenix on the board. Elon held a 1-0 lead at halftime, but a handball in the six-yard box by senior defender Samantha Dominguez in the 70th minute awarded Drexel with a penalty kick. The Dragons converted the opportunity to tie the match at 1-1.

The Phoenix outshot the Dragons 15-10, with four of those shots coming from Fusca, whose overtime goal was her first of the season. This was the third time in the last five matches that the Phoenix won in overtime.