Marching for a choice

Elon University students among those in Raleigh at the Women’s March on Oct. 2 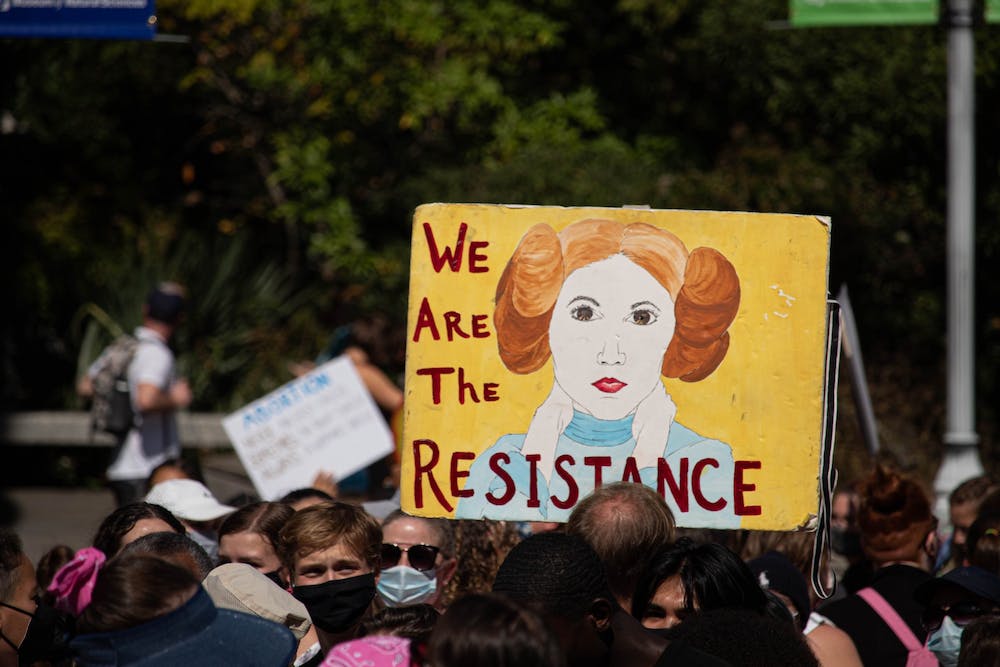 Thousands of people gathered Saturday at women’s marches in Washington D.C. and across the nation to march in support of a diverse range of issues, including women’s rights, healthcare reform, reproductive rights and LGBTQIA+ rights.

Women’s marches throughout the nation, such as the Rally for Abortion Justice in Raleigh, were in response to legislation surrounding abortion passed by the Texas Legislature this spring and went into effect in September.

The legislation states that any pregnancy in which a heartbeat is detected cannot be aborted and restricts abortions after six weeks of pregnancy. However, many individuals often do not know they are pregnant before the six-week mark.

The legislation does not make exceptions for rape, sexual abuse or incest, according to the Washington Post. The legislation also allows individuals to sue an abortion provider or another person if they are suspected of “aiding and abetting” abortions after six weeks.

Libby Coyner, Elon University archivist, said the marches occurring in the nation this weekend represent a push back against the legislation enacted by the Texas Legislature and that there will be much discussion surrounding how states, such as North Carolina, make legislation surrounding abortion and courts, such as the Supreme Court, enforce abortion legislation.

Juniors Kasey Fountain and Juliana Schiano marched in the Rally for Abortion Justice in Raleigh to show solidarity and support of women and reproductive rights.

Fountain said seeing her friends in high school with no access to medical resources, such as birth control contraceptives, inspired her to march. Planned Parenthood, a nonprofit organization that provides reproductive healthcare in the United States and globally, experienced a decrease in funding from the Trump administration, impacting young people’s access to vital information and support surrounding reproductive safety.

Schiano said she became inspired to march after seeing the first Women’s March in 2017.

“It has just been something that I’ve been always been very passionate about and wanting to go…,” Schiano said. “I think I will be very upset with myself if, in 20 years, I won’t be able to look back and say that I did something and I fought for what I believed in.”

Being surrounded by fellow women rights activists and advocates of reproductive rights at the rally made Fountain feel inspired. She said seeing a male holding up a sign with a drawing of Princess Leia from Star Wars with the words “We are the resistance” was especially moving to her.

“It’s really inspiring to see so many women and men, especially men are out here supporting, and I think that that's awesome,” Fountain said. “There’s also been a lot of talk about the rights for non-binary people and trans people and that’s awesome.”

Gerri Goldstein stood alongside her daughter and granddaughter in downtown Raleigh on Saturday. Molly Ruiz, an Elon freshman and Goldstein’s granddaughter, brought three of her friends to the march after hearing about it through her grandmother.

Lucy Hewitt, Elon freshman and friend of Ruiz, said when she and her friends found out about the legislation in Texas, all four women met and expressed how heartbroken they were.

“We don’t want other states to see Texas as an example, we want people to see this demonstration as what’s going to happen when they try to do this,” Hewitt said.

Monica Dongre, a mother of two young boys, was accompanied by her friends on the steps of the North Carolina Museum of History holding up signs that said “Who run the world?” and “Got rights?” Dongre said she was at the rally with her friends to stand up for the reproductive rights of the next generation after her.

“For me, it’s really just really important to see them raised in a world where women are viewed as equal,” Dongre said. “I’m a working woman, I’m an attorney, and a lot of who I am today is because of Ruth Bader Ginsburg and I stand on her shoulders and the shoulders of many women before me. It’s important for me that my kids continue to live in a world where that is the norm rather than the exception.”

Outside of the Bicentennial Plaza in downtown Raleigh stood another group of protesters who were still advocating for women's rights but believe that life begins at conception.

Amy Lawson, one of the protesters, said she came out because she still wants women to feel empowered but does not agree with abortion.

“We came to this march because we love women, and we want women to be respected and we want women to be empowered,” Lawson said. “I came because pro life is pro women because we are for the rights of women from conception to natural death and I stand by that and want people to understand the importance of words of life and giving everyone the ability to enjoy life to the fullest.”

Check out our coverage in Washington D.C. below:

Lawson also said that she was happy to see that people were there from a place of love and believes that is what fighting for human rights is all about.

Being surrounded by fellow women rights activists and advocates of reproductive rights at the rally made Fountain feel inspired. She said seeing a male holding up a sign with a drawing of Princess Leia from Star Wars with the words “We are the resistance” was especially moving to her.

“It’s really inspiring to see so many women and men, especially men are out here supporting, and I think that that's awesome,” Fountain said. “There’s also been a lot of talk about the rights for non-binary people and trans people and that’s awesome.”