The Phoenix celebrated the anniversary of the stadium’s opening Sept. 4 in a game against Wofford 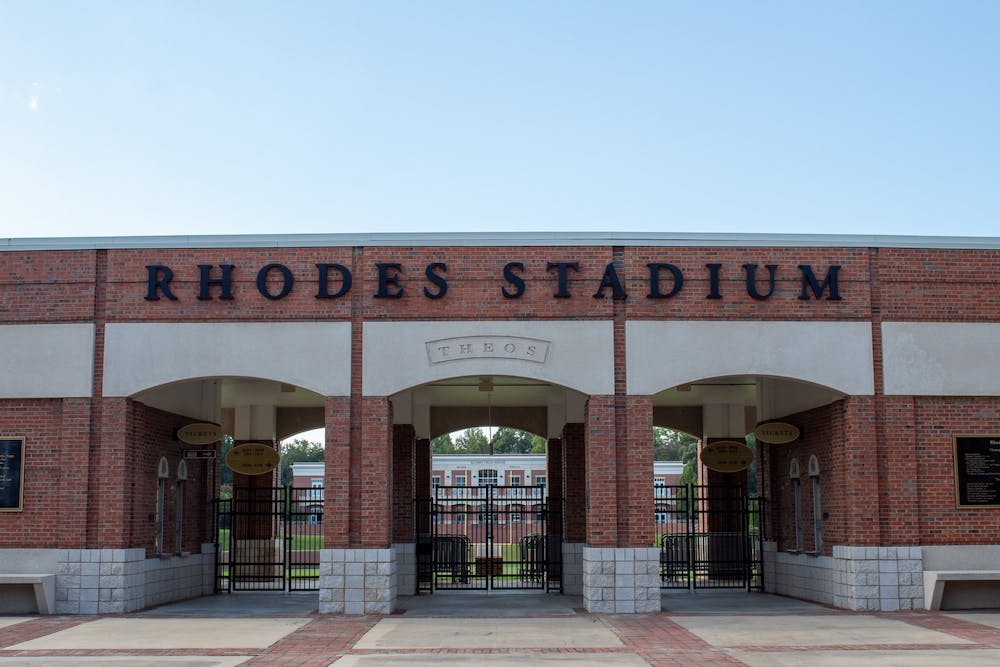 Host of Elon University’s football team, Rhodes Stadium will celebrate its 20th anniversary this season. The Phoenix have played football at three separate venues throughout the program’s history.

For the first 92 years of Elon University football, the program did not have a stadium on campus to call home.

That all changed in 2001 when Rhodes Stadium opened up, with the opening of an on-campus venue built specifically to host Elon football.

As Elon football begins its 20th season at Rhodes Stadium, there is much to reflect on and celebrate. Brian Dudiak, who serves as Elon’s assistant athletic director for facilities and event management, said the stadium matches up perfectly with Elon’s identity and has made a big impact on both the football program and the university.

“It has drastically changed things, it’s a really good venue,” Dudiak said. “It’s in a nice spot. It fits in with Elon. We have such a beautiful campus, and they extended that into the facility.”

Prior to 1949, Elon’s football team played its home games at Comer Field, located on Williamson Avenue across from what is now the town of Elon’s fire station. The team moved to Walter M. Williams High School’s Burlington City Schools Stadium when it opened in 1949 and played there through 2000.

While Burlington City Schools Stadium can accommodate 10,000 spectators, it is approximately 10 minutes from Elon University’s campus, meaning Elon students and fans had to commute to Burlington to attend games.

Clay Hassard, an offensive lineman for Elon’s football team from 1982 to 1984, said the atmosphere at Burlington City Schools Stadium was always good, but the distance from Elon’s campus made it difficult for the team, students and fans.

“In its heyday, it was a really great facility, and it still is,” Hassard said. “It just wasn’t on campus, and the effort to go into Burlington versus the effort to walk across campus are two different things.”

Wanting to bring its football team on campus, Elon University broke ground on its new football stadium on March 14, 2000. The project cost $13 million at the time, equivalent to over $20 million today.

Rhodes Stadium, named for Elon trustee Warren “Dusty” Rhodes and his family, opened a year later and hosted its first game on Sept. 22, 2001, with Elon losing to North Carolina A&T 23-7.

Hassard, who now serves as Elon’s senior associate director of athletics, compliance and campus relations, is in his 34th year working for Elon Athletics. He worked with the school as they transitioned from Burlington’s stadium to Rhodes Stadium and said he is proud to see how far the university has come with the addition of the venue.

“It excites me to know that we have come so far,” Hassard said. “Who knows where we’ll be in another 20 years, but it’s fun to watch, and it’s fun to be around.”

One of the most important benefits of having an on-campus stadium for Elon University is showcasing the venue to prospective recruits.

Dudiak said showing recruits an on- campus venue rather than an off-campus one makes a huge difference in the process, not only for the football program, but also for Elon’s other varsity athletic teams that host high school athletes at Rhodes Stadium.

“To bring a recruit to an on-campus venue and a bigger venue is definitely a lot more impactful,” Dudiak said. “It really got us up to par with the schools we’re recruiting against.”

Another area that has improved with the addition of Rhodes Stadium is fan engagement. Before each Elon home game, tailgaters gather outside the venue to connect and have fun with family and friends. Dudiak said he believes that kind of environment is only possible at an on- campus site.

“The buzz of a gameday is just something you can’t replicate off-campus,” Dudiak said. “To have those five or six Saturdays every year truly be a campus-wide celebration and have everyone enjoying it, it was a huge thing for the campus to get.”

Dudiak said that having an on-campus football stadium has helped validate the football program, with the increased fan engagement building the team’s brand.

“It really changed things and made it a lot more legitimate to have a stadium of your own right on campus, it’s much easier to come support with it being right in the heart of Elon,” Dudiak said.

In its 19 years of operation, Rhodes Stadium has hosted many incredible moments in Elon football history.

Though the Phoenix lost 27-10 that day, Hassard said he will never forget the atmosphere and energy in the stadium.

“Fans were shoulder to shoulder all the way to the grass banks, and it was a sight to behold,” Hassard said. “It was a lot of fun that we had a lot of support from the students and staff.”

Dudiak said his favorite game at Rhodes Stadium was the 2019 match-up between Elon and William & Mary, which went into five overtimes.

Dudiak said he does not get much of a chance to watch games at Rhodes Stadium due to his game day responsibilities, but at the end of regulation against William & Mary, he moved down to the field to help the teams make it back to the locker room. Because he was where he needed to be for when the game ended, he was able to watch the overtime sessions from field level.

“It’s rare that you’re able to actually truly enjoy a great game while you’re working it,” Dudiak said. “It was fun being in that environment.”

After only allowing a limited number of fans last season, Elon Athletics will welcome full capacity crowds again at Rhodes Stadium this fall, much to the delight of Dudiak.

“We had worked for years to build the environment and fan experience at Rhodes Stadium, and we had to go backwards last spring,” Dudiak said. “We’re not out of the pandemic yet, but it’s nice to see at least some of the things we shook up starting to take form back like it used to.”