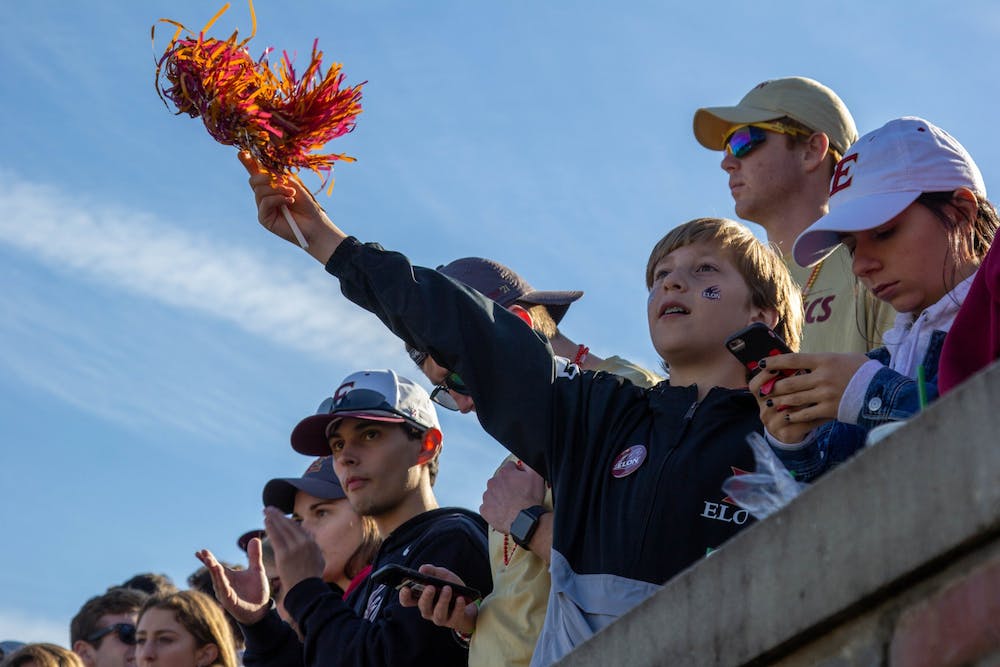 On the Friday night before an Elon University football game, the Steed family begins their eight-hour car ride to North Carolina from Alabama at about 11:30 p.m.

Ben Steed, the 12-year-old half-brother of Elon’s starting quarterback Davis Cheek, is asleep for most of the ride.

Driving the car is Davis’ step-dad, Stuart Steed, and to his right in the passenger seat is Monica Steed, Davis’ mother. They arrive at Davis’ grandmother’s house at around 8 a.m. in Hickory, North Carolina. This gives Stuart time to rest before they need to be at Rhodes Stadium at 11:30 a.m. to participate in the Phoenix Walk, which is how the family starts off their home game traditions.

The family said they rarely miss a game. For every home game they drive, and for every away game they either fly or drive.

"I just like watching [Davis] play. I like yelling at him when he is about to get sacked."

“I just like watching [Davis] play,” Ben said. “I like yelling at him when he is about to get sacked.”

For Ben and many of Davis’ other relatives, football season is more than just an opportunity to see Davis play.

It is an opportunity for the family to get together. Davis’ parents — Monica Steed and Eric Cheek — are divorced. He splits his breaks between his dad’s house in Chicago and mom’s in Alabama, where his little brother Ben lives.

“Throughout the entire year, I was away from Elon for maybe a week and a half or two weeks, and that was split between my dad and my mom,” Davis said.

For Eric and Monica, this is one of the few opportunities they have during the year to have all their family together, as they both live hundreds of miles from Davis and his older brother Tyler, who lives in Raleigh.

“When it’s not football season, it is really hard for me to see Tyler and Davis,” Monica said.

In a family with children with so many different interests, football is one of the things that bring them together.

“The thing about me and my brothers is that we’re completely different human beings,” Davis said.

“My older brother was always kinda the brains,” Davis said.

Ben, on the other hand, plays the trumpet. He is one of two middle schoolers to play in the high school band.

Tyler said the age gap allows Ben to do “his own thing and not be reliant on anyone else.”

“He can go down and hang out with the people at the game himself and be an icon,” Tyler said.

At any given home game, you can see Ben in the front row of the student section yelling at his brother to pass the ball or shaking a maroon and gold pom pom.

He used to wear Davis’ jersey to every game, but after a couple of losses, Ben decided the jersey was no longer lucky.

Despite this, you can still always find him at the games covered in Elon gear.

While Monica stresses that Ben has to show support for his siblings, she said she also wants him to be able to do what he loves — just like Davis.

That’s why the family leaves so late on Friday evenings, so Ben can finish out with the band during Friday night football games.

The Steeds are not the only ones who have driven all night to get to Davis’ games. Earlier this year, Eric’s flight to the James Madison game got canceled.

So, instead of accepting the fact that he would miss the game, he jumped in his car and drove 14 hours to Elon and arrived at 2 p.m. when the game began. Eric has never missed a game.

Games aren’t the only thing that Eric doesn’t miss out on. Eric even got a tattoo to match his son’s.

The father and son duo’s matching tattoo is of the word “doubted” on one of their arms.

According to Davis the tattoo “relates to football and how I’ve embraced the doubt.”

This isn’t the only tattoo Eric has — hidden away on his calf is a tattoo of the Elon Phoenix. He said he supports Davis with every step he takes.

“I always try to show the appreciation for that because I do really appreciate them,” Eric said. It is important to him that he does this because of months planning and hours of driving and flying are put in every week for his family to get to his games.

His family knows it’s all worth it because of their son’s love for football.

“Davis’ teammates are his family, and he would die for them,” Eric said.