Cheek returns to the grid iron after ACL tear 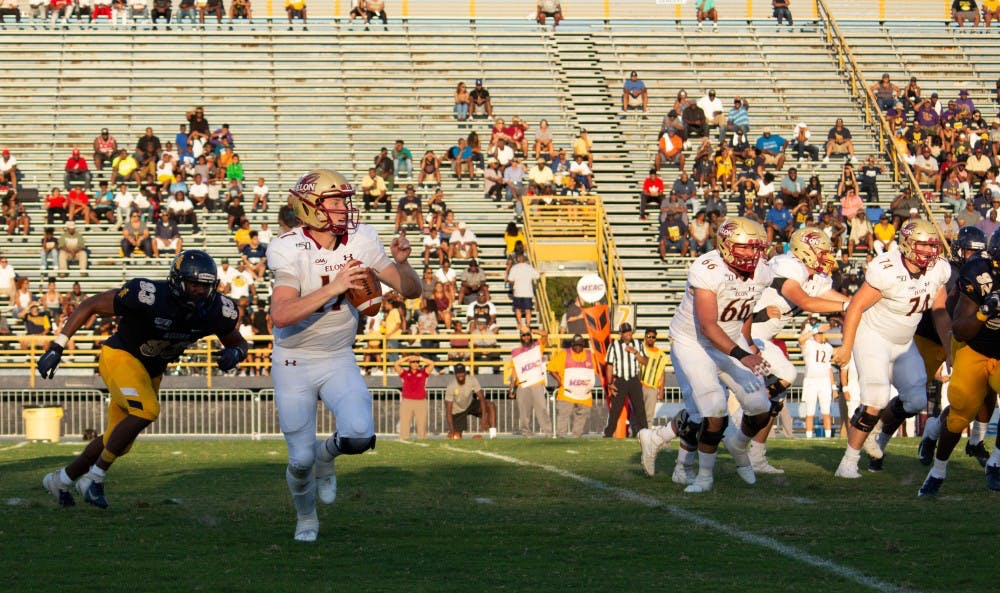 An ACL injury is one of the most devastating in sports. The anterior cruciate ligament lies behind the knee cap and holds the tibia and femur together and without it, an athlete can’t walk. Quarterback Davis Cheek suffered a grade III “complete tear” in week seven last year. Now, less than 10 months later, he is ready to step on the field for the Elon University Phoenix.

Last season, with Cheek at the helm, the Phoenix started red hot. After falling to its Football Bowl Subdivision rival, the University of South Florida, during the first week, the team rallied off two decisive wins over Charleston Southern University and New Hampshire University. In these games, Cheek threw for a total of 478 yards and two touchdowns.

Cheeks crowning achievement of the 2018 season undoubtedly came the following week when the Phoenix traveled to the then No. 2 team in the Football Championship Subdivision, the James Madison University Dukes. Cheek passed efficiently against the elite Dukes defense to give balance to the Phoenix’s strong rushing attack.

Ultimately, the game came down to Cheek, who was tasked with leading the Phoenix down 24-20 with four minutes remaining in the fourth quarter. Cheek completed five of his six pass attempts to take the Phoenix down the field and then delivered a perfect strike to the back of the endzone into the waiting hands of then-freshman Avery Jones to lift the Phoenix to a 27-24 upset victory. “We went in there and we handled adversity really well,” Cheek said. “Throughout the game, there’s always four or five moments that end up dictating the game. We took advantage of those really well.”

Adversity and sports go hand-in-hand, and no more than a week after the triumph of a comeback victory, there was a pitfall that would change Cheek’s career.

The play, as Cheek recalled, was nothing out of the ordinary. The University of Delaware defense only rushed three defensive linemen, and Cheek knew he had to escape the pocket in time to find open receivers downfield.

“I wanted to try to keep plays alive, and that’s what I tried to do on that play. I ended up getting forced out to the left. As I’m going, I end up squaring up to try to look downfield to throw. And [my knee] just pops and I go down. And for about 10 seconds, it was really, really, really bad pain.”

“I was just like, ‘alright, like get up, you need to get up now.’ And that was the first time in my life that I’ve been like, ‘I don’t know how to get up.’ That was the most painful part,” Cheek said.

Cheek plays at Rhodes Stadium on Saturday, Sept. 7, when the Phoenix takes on the Citadel Bulldogs at 2 p.m.

The tear was non-contact, meaning Cheek’s motion alone tore his ACL. Cheek was immediately taken to the side of Raymond Field in Delaware and placed on a table where trainers and doctors performed tests on the knee.

One test, Cheek recalled, involved a doctor pulling on his leg to test the resistance of the ligament by trying to separate the tibia from the femur. To the shock of the trainers and Cheek himself, the tibia was able to separate completely, meaning the ACL was nearly nonexistent.

Later, an MRI would show that Cheek had torn the ligament through the middle, “exploding it,” leaving only white fluid between his leg bones.

“When the doctors were looking at it, I was telling them, ‘put a brace back on it let’s go in.’ And the doctor had to be like, ‘I think you might be seriously injured,’” Cheek recalls. “I had pretty much everyone telling me to calm down, just you know stay on the sideline, we’ll win this game and go on.”

The one upside to Cheek’s injury was the lack of swelling in the knee which allowed for him to enter surgery just over two weeks after the injury. Cheek’s parents flew in from Alabama and Chicago to be with their son during his surgery.

Prior to the ACL tear, Cheek had not experienced anything more than a minor ligament tear in his ankle while playing for Butler High School in his hometown of Matthews, NC. Cheek was naive to the hardships of surgery on both the mind and body. He said in the time after surgery he had to confront “little demons” and needed to lean on the support system around him.

Cheek began the rehab process nearly immediately after knee surgery. Since he couldn’t practice with the team, Cheek spent hours each day in physical therapy, pushing himself to regain mobility in his knee through gravity resistance exercises. This training, Cheek said, brought about the most pain he had ever felt in his career.

Even outside of physical therapy, Cheek struggled through the day-to-day life of a student athlete after a major surgery.

“I remember it took me an hour when I was actually going to class. It was not very far at all. But I had to stop every few steps because I was just like ‘all right, we got to take it one step at a time.’ And that’s kind of how the whole process ended up being.” Cheek said.

After missing spring training with the team due to rehab, Cheek got to the position where he could start participating in non-contact drills in practice. Head football coach Tony Trisciani said that the coaching staff had to ease the quarterback back into the speed of practice by managing his workload.

Throughout the summer, the coaching staff would limit his repetitions, even keeping him out of practices to avoid setbacks in the recovery process. Trisicani said that at times, the coaching staff needed to reel Cheek in when he just wanted to jump in with the rest of the team.

“This team is full of competitors and guys that want to be out there and get better and take advantage of opportunities, but Davis understands … what’s important,” Trisciani said, referring to his full recovery.

The Phoenix week one matchup at North Carolina A&T was a game 10 months in the making for Cheek. Ahead of the game, he noted that he had a chip on his shoulder to prove that all the hard work was worth it not only for himself, but for the people around him that supported him through these trying times.

When Cheek stepped onto BB&T stadium in Greensboro, it was clear that Cheek was back physically and mentally.

Cheek threw for over 200 yards and led three scoring drives for the Phoenix. He capped the final scoring drive with a 14-yard touchdown pass to fellow junior wide receiver Kortez Weeks, which tied the game at 21 late in the third quarter. But the game was not the story book ending Cheek had hoped for.

“It’s a tough one to lose on, but you let us think for our 24 [hours] and then you got to move on because we have more football to play,” Cheek said.

Despite the hard-fought loss, last Saturday’s game was the conclusion to a 10-month stint of adversity and recovery for quarterback Davis Cheek, a story that is undoubtedly an inspiration to the team and Phoenix fans everywhere.

“The day after he had surgery, he committed himself every day to getting back,” Trisciani said. “Your quarter ’s going to be the leader of your football team, and Davis has that leadership ability. His actions speak volumes to the team, and it can be contagious.”