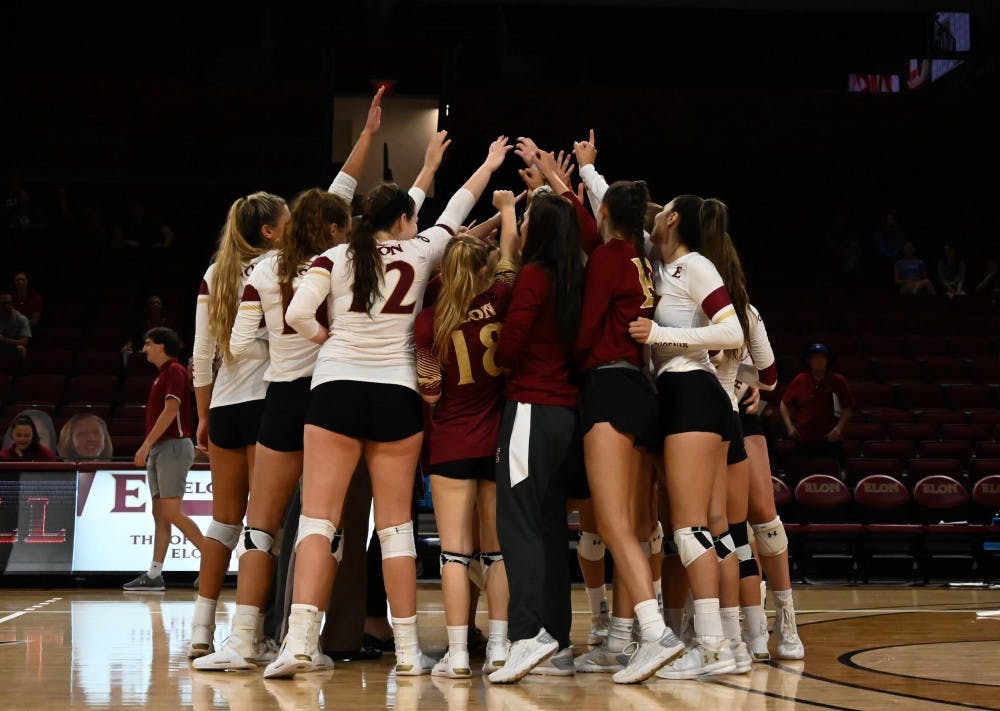 This was the team’s third match in two days at the Virginia Tech Invitational, after splitting a pair of matches yesterday with Toledo University and Lehigh University.

The loss to tournament host Virginia Tech drops Elon’s record to 1-2 on the season and 0-5 all-time against the Hokies.

The Phoenix got off to a slow start in the opening set, falling behind 19-13, but found its rhythm late, winning 11 of the next 16 points to tie the set at 24 apiece. Despite the furious rally, the Hokies produced two consecutive kills to win the set, 26-24.

Both teams traded points throughout the beginning of a competitive second set. However, with Elon leading 13-12, the Hokies went on an 8-0 run to take a commanding 21-13 lead. The Phoenix won just four more points, ultimately losing 25-17.

Following the tough second set loss, the Phoenix responded well in the third. The team took the lead at 14-13 and never relinquished it, winning 11 of the final 18 points to force the match to another set.

The Phoenix got off to a hot start in the fourth set, racing to an 11-7 advantage, but were unable to hold on to the lead. Tied 15-15, the Hokies scored four consecutive points to steal control of the set and went on to close out the match with a 25-22 fourth set win.

Senior setter Haylie Clark racked up a career high 42 assists for the Phoenix, marking the second time in her career that she had more than 40 assists in a single match. No other Elon player had more than two assists.

Senior outside hitter Leah Daniel led the Phoenix offensively with 21 kills, her most in the team’s three games at the Virginia Tech Invitational. Daniel’s 47 kills at the tournament earned her a spot on the all-tournament team and most valuable player honors. Additionally, she now needs just four more kills to reach 900 for her career.

Sophomore middle blocker Lily Emlong provided the Phoenix with a spark off the bench in the final two sets, posting a career high five kills and two blocks. Emlong, who played sparingly as a freshman during the team’s spring season, proved critical in Elon’s third set victory, delivering three kills late to help push the Phoenix ahead.

The Phoenix return to action on Tuesday, Aug. 31 when they travel to Durham to face the Duke University Blue Devils of the Atlantic Coast Conference.

Duke is 2-0 this season, thanks to a pair of five-set victories over Coastal Carolina University and The University of Iowa.

Elon leads the all-time head-to-head against Duke 8-5, but has not beaten the Blue Devils since 1974, losing their last four meetings.