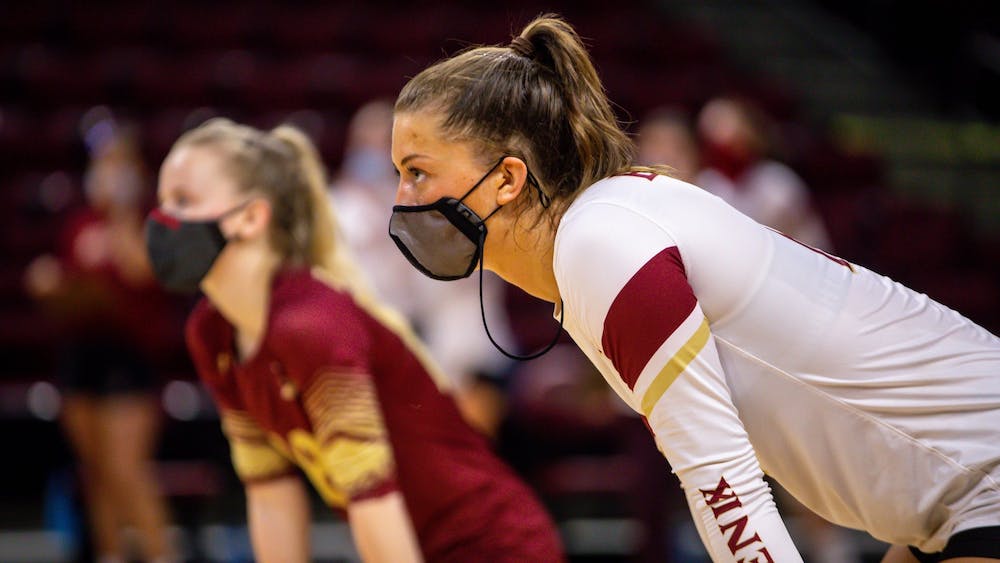 Senior outside hitter Leah Daniel and junior libero Jordan Gower wait for a serve against Lehigh. Courtesy of Elon Athletics.

Blacksburg, VA — Elon’s women’s volleyball team began its 2021 campaign with two matches on Friday Aug. 27, 2021 at the Virginia Tech Invitational in Blacksburg, Virginia. The team faced off against the Toledo University Rockets of the Mid-American Conference and the Lehigh Mountain Hawks of the Patriot League.

The Phoenix opened its day against Toledo, losing in three consecutive sets to the Rockets.  However, the team bounced back in its second contest, earning a four-set victory over Lehigh.

Despite the scoreline against Toledo, the Phoenix came out firing on all cylinders. The team got off to a 20-14 lead in the opening set and controlled the momentum throughout, in large part thanks to the play of seniors Leah Daniel, Natalie Cummins and Haylie Clark. However, Toledo responded with an emphatic 12-4 run to steal the set 26-24 and grab all the momentum from the Phoenix.

Toledo controlled the rest of the matchup, winning the second set 25-18 and the third set 25-16 to take the match. This was the first meeting between Elon and Toledo, and both teams are now even at 1-1 in the all-time series.

The Phoenix followed up its tough loss with a dominant victory over Lehigh. The Phoenix took the first two sets 25-18 and 25-20, respectively. Lehigh tried to turn the tides by taking the third set, 25-17, but it was not enough for the Mountain Hawks, as Elon took the fourth set 25-22 to claim its first victory of the year.

Daniel, the reigning CAA Player of the Year, led the Phoenix with 15 kills against Lehigh, while Clark provided 28 assists.

This was the first competitive action for Elon’s volleyball team since its 3-1 loss at College of Charleston on March 28.

The Phoenix have a quick turnaround, as the team will face tournament host Virginia Tech on Saturday at 3 p.m.