Elon football prepares for second season of 2021 through summer workouts

After competing in an unprecedented spring campaign, the team is making the most of a shortened offseason 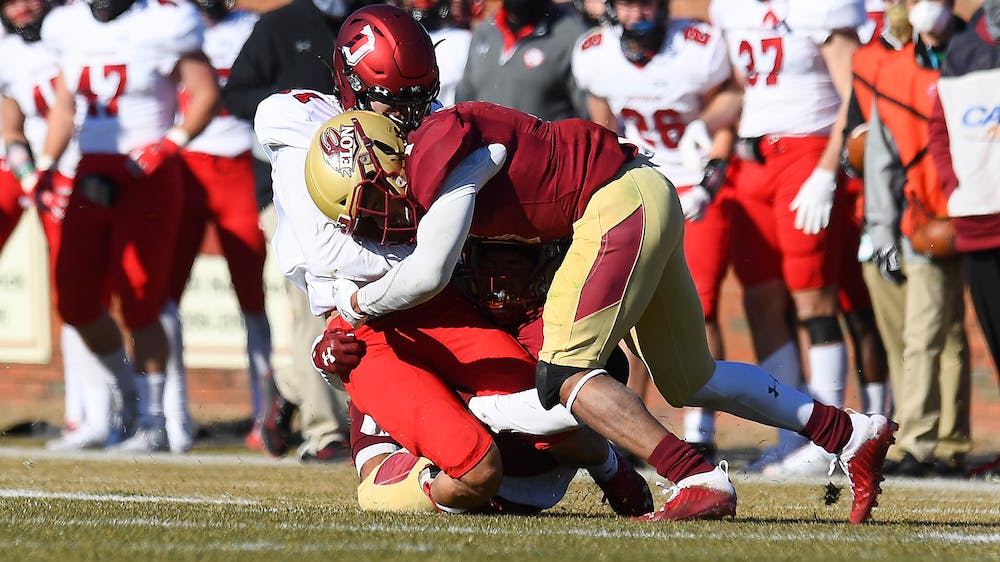 In March, the Elon University football team completed its first spring season in program history. Just a mere five months later in September, the team will return to the gridiron for its second campaign of 2021.

With such a quick turnaround between seasons, players that are staying on-campus this summer have much less time to prepare for the fall season than usual.

Among those participating in summer workouts is junior safety Cole Coleman, who believes the preparation is especially important for the team this year.

“We’re going from a season to preparing for a season to another season and there’s not a lot of time to recover,” Coleman said. “I think this summer is going to give us a chance to self-reflect and immediately attack everything that went wrong in the spring.”

Getting back to normal

In a normal offseason, the team would have approximately nine months to prepare for its next season, but the spring season ended on March 27, leaving just over five months to train.

While this offseason is shorter than a typical one, it is much more normal than what the team dealt with in preparation for its spring season. Due to COVID-19 restrictions and pauses last fall, the team was unable to hold practices and consistent training blocks until November.

“There was a lot of uncertainty involved and uncertainty is one thing that you never want to deal with in a team sport,” Coleman said. “When you’ve got pauses, it can make it difficult on a team to build chemistry or prepare the way that you should.”

Players returned home for the six week winter break and returned in January with only four weeks to prepare for the spring season. Nick DiMarco, Elon University’s director of strength and conditioning, said the team was not well-conditioned following the time off, which presented a significant challenge for him and his staff.

“From a preparation standpoint, we were not even close to what the team was capable of,” DiMarco said. “There was a massive difference in strength and conditioning levels were extremely low.”

DiMarco said he believes that even though this offseason will be shorter than a typical one before a fall season, it will be an easier one to prepare for than the spring campaign because there are no scheduled layoffs or COVID-19 restrictions to work around.

“It’s nice to have time to actually prepare for this season,” DiMarco said. “This is actually a little bit similar to our 2019 season when we had a full season to actually go in and prepare.”

The main focus for DiMarco and his staff this summer is to make sure the team’s conditioning is good enough to meet the immense physical requirements of an 11 game regular season.

“We will take what the game requires - three to four seconds per play, 75 plays per game, about eight to 12 series per game - and work backward from there,” DiMarco said. “At the beginning of the summer, we’re just trying to build up our volume to where we know that we are completely prepared to play a game and completely prepared for a full week of practice.”

The team also participates in strength training during the  summer. Players complete workout cards depending on their position, with each positional group performing different routines to maximize the physical abilities they need to succeed on the field.

“A running back or safety does not need to get 10 extra pounds on his bench press to be a better football player, so we are going to put a lot more emphasis on speed, power and just keeping them healthy,” DiMarco said. “The linemen have different needs obviously than the skill position guys. They get physically tired from pushing other humans and with them doing that on a play-by-play basis, strength and power is their niche.”

Coleman, a safety, is working on his footwork and technique this summer to improve his versatility, in hopes of being able to cover both tight ends and fast wide receivers. He is also working on bettering his flexibility, which he said he has not worked on since his freshman year.

“It’s something that can really help me out with not only being able to be more agile on the field, but I think it can also help a lot with my durability,” Coleman said.

DiMarco and his staff have placed emphasis this offseason on the importance of recovering properly from practices and workouts. Junior running back Jaylan Thomas, one of the players remaining on-campus this summer, believes recovery is crucial in achieving peak performance both in the weight room and on the field.

“Training and strength and conditioning is very important, but we realize that in order for that to be used as a positive, we have to eat, sleep and recover,” Thomas said.

Another priority for the strength and performance staff is nutrition. DiMarco, a certified nutritionist, educates players on how to practice healthy eating habits while still taking in the calories necessary to perform and recover efficiently.

“Gaining lean body mass is a huge part of the sport of football, unlike a lot of other sports. If you’re not taking in enough calories and enough quality calories, you’re not going to be able to recover from the training sessions,” DiMarco said. “It’s simple to do the right things, but it’s not easy to do the right things. It takes a certain level of commitment to get all the meals you need.”

For Thomas, the importance of the summer program extends beyond just getting stronger and faster, as he believes the work in nutrition and recovery play just as large a role on the team’s performance as strength and conditioning.

Looking ahead to the fall season

“Usually, we have a long offseason to recover from injuries from the season, but now instead of recovering during the offseason, there is a completely different timeframe,” Coleman said.

While injuries are limiting what some can do this offseason, Thomas credits the strength and performance staff for creating a summer program to help the team improve and prepare physically for the upcoming season without overworking them.

“I think that’s the big thing that our performance staff has done a really great job of,” Thomas said. “We just came off a quick season and they’ve been finding ways to help us get faster and stronger without doing any more stress or any more bruising on our bodies.”

One advantage of the short offseason is that the team can quickly correct mistakes from the spring season and make adjustments that will better prepare them for training camp and the upcoming season.

“Every single game is fresh on our mind,” Coleman said. “If we had a problem on a certain play or if I knew that a team was attacking me in a certain way, we can immediately focus on that right now.”

Though the team went 1-5 during their injury-riddled spring season, they will return 20 starters for the fall. Thomas is optimistic that the team’s strong chemistry will lead to a bounce back season.

“I feel great about this upcoming season,” Thomas said. “I feel as if we have all the tools that we need to be successful and we just have to go out and get the job done.”

The Phoenix are scheduled to kick off the season on Sept. 4 at home against Wofford.