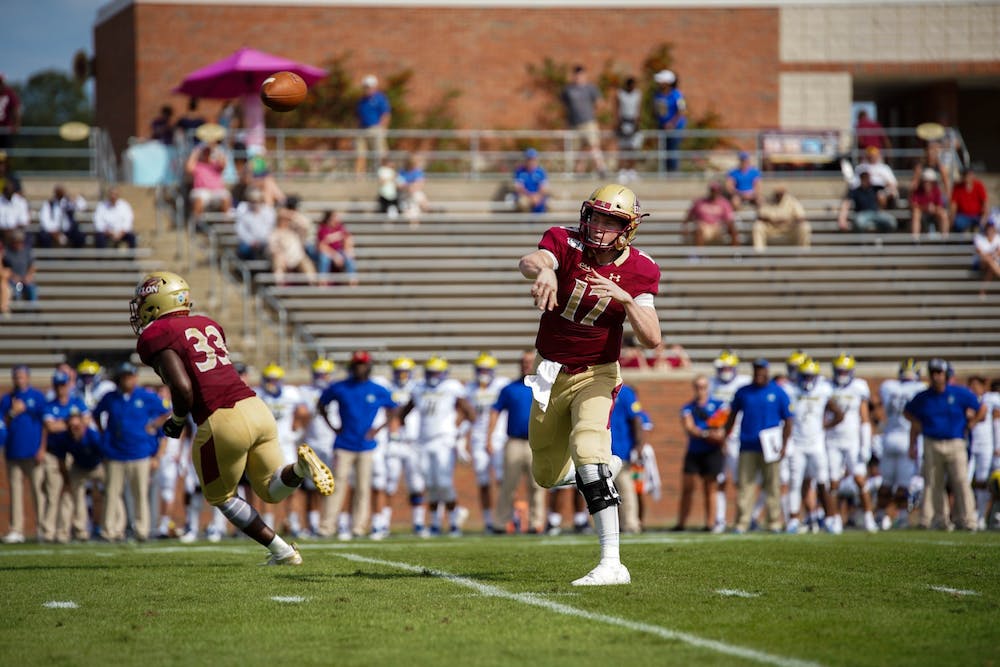 Elon University’s football team is coming off of a long break and is ready to approach this spring season. Although weather and practice schedules are different, head coach Tony Trisciani said the team’s goals remain the same: win one game per week, win the Colonial Athletic Association Championship and compete for a national championship.

“Every game means so much more because you don’t know whether or not you’re going to be able to play the next week. If you get the chance to play on Saturday, you’ve got to really take advantage of that,” he said.

“Everyone’s just going to be really appreciative of the opportunity,” Cheek said. “We’re going to have a little more fun than you might usually just [be]cause, it’s been taken away a little bit from you,”

Due to COVID-19 protocols, the team has to reorganize meeting times to ensure protocols are being followed. Therefore, only a certain portion of the team can be allowed in the facility at one time. Trisciani said this affects team dynamics and has caused the athletes to spend more time in the facility than usual.

The team is also not experiencing what would be considered a standard preseason, since that would typically occur over the summer before classes begin. The players would usually begin preparing for the season in June, which they did last summer. Essentially, the team has now experienced two pre-seasons in one academic year. However, the season was officially canceled due to the pandemic in early August.

According to Trisciani, the coaching staff’s priority is to keep the players safe and healthy after 15 months without football.

“They spend a little more time here than normal because of the stagger and some of the mitigating efforts and protocols that we have in place. But at the end of the day, we’re trying to keep them safe,” Trisciani said.

To make this priority a reality, Elon Athletics are requiring testing three times per week.

“We are thrilled to be together as a team and practicing for a spring season and a tremendous amount of work and preparation by our players, our coaches, our administration and our sports medicine staff have gone into even getting us to this point,” Trisciani said.

The team will begin their season with a non-conference matchup at Rhodes Stadium at 1:30 p.m. against Davidson College. A limited number of fans will be allowed to attend the game.