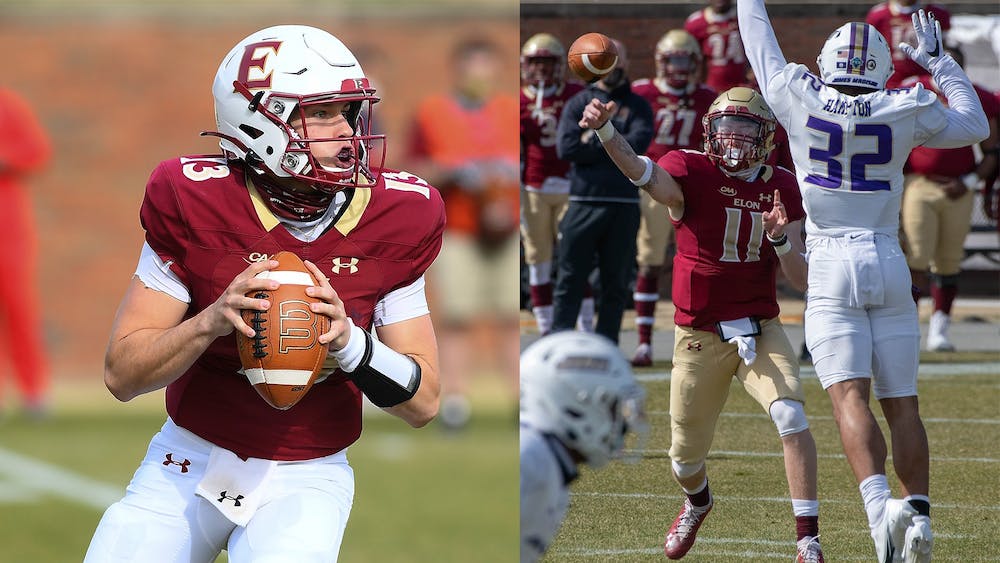 Justin Allen ‘24 (left) and JR Martin ‘24 (right) will serve as quarterbacks for the the 2020-21 football season following Davis Cheek’s and Joey Baughman’s injuries. Photo on the left courtesy of Elon Athletics and right photo by Thomas Denome.

Spring football for the Elon Phoenix has had its fair share of ups and downs after six games so far this season. It all started prior to Week 1 when the team learned it would be without senior starting quarterback Davis Cheek for the entire season due to a foot injury. Now, their final two games of the season have been postponed due to COVID-19 related issues within the program.

At this point in time, the Colonial Athletic Association has yet to announce if and when Elon will play its final two games of the season. Whether or not the Phoenix play, Elon was still able to get a tiny taste of what’s to come for the future of the program during this shortened season.

Redshirt sophomore Joey Baughman suited up as the team’s starting quarterback in the season opener against Davidson College. Baughman led the team to a comeback victory in Week 1 and started again in Week 2 against Gardner-Webb University. But late in the third quarter, Baughman left the game with a lower leg injury and was officially declared out for the rest of the season.

Trisciani did say, however, his team was going to push forward and attempt to salvage the season.

“It’s been frustrating, but we’re going to continue to compete and develop our players,” Trisciani said. “We’re playing a lot more players right now, maybe more than we would have in a typical season. We want to get as many guys on the field and get them some game experience to develop our program, which in turn will make us better in the fall.”

Martin first appeared as the quarterback for the Phoenix in Week 2 against Gardner-Webb after Baughman left the game. In Baughman’s absence, Martin completed 8 of 11 passing attempts for 69 yards and one interception.

Martin’s first career start came the following week in Elon’s conference opener against James Madison University. Martin started off the game strong, tossing a touchdown to junior wide receiver Bryson Daughtry, giving Elon a 17-3 lead going into halftime against the No. 1 team in the FCS. Elon’s offense struggled in the second half, failing to score another point and turning the ball over once off an interception, allowing the Dukes to come back and win 20-17.

Despite the shaky second-half performance against James Madison, Martin got the nod as the starter for their next game against Richmond. Down 7-24 in the third quarter, Trisciani made the decision to switch quarterbacks and pulled Martin out of the game and put Allen in. Allen remained at quarterback for the rest of the game, totaling one touchdown and two interceptions.

Against The College of William & Mary the next week, Trisciani stuck with Allen as the starter. Allen only saw the field for the first half recording just 34 yards passing and no touchdowns. In the second half, the ball went back into the hands of Martin, who managed to record over 100 yards and threw Elon’s lone touchdown.

In Elon’s second game against the University of Richmond, Allen suited up for his second consecutive start despite being removed from the game the week before. This time, the outcome was very different for Allen. The redshirt freshman finished the game with 198 passing yards, one touchdown and one interception.