With its fall season postponed, the Phoenix now turns its attention to being prepared for a spring awakening 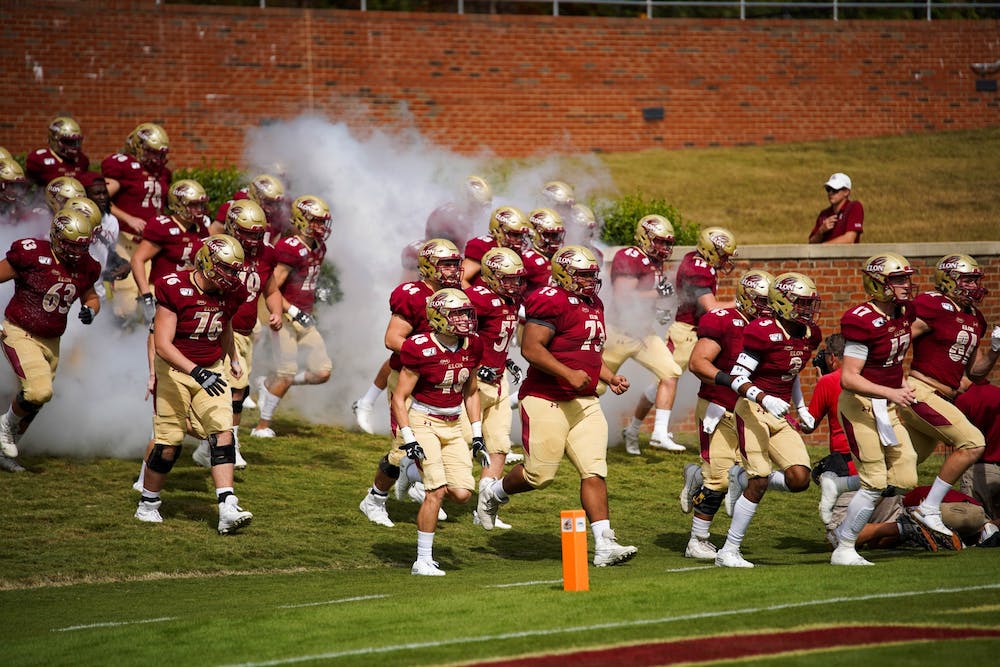 Photo by Clare Grant | Elon News Network
The Phoenix running onto the field for their game against the Delaware Blue Hens in Rhodes Stadium on Oct. 12, 2019. The Phoenix beat the Blue Hens 42-7.

Tristen Cox, a senior defensive lineman, had high expectations for his final season with the Elon Phoenix on the football field. Although the Colonial Athletic Association announced it was suspending fall sports due to the coronavirus pandemic, the Phoenix still planned on having a season in the autumn independent of the CAA. But, shortly after the decision was made, Elon Athletics opted to suspend all fall sports as well.

“I wasn’t that surprised with how everything else had been looking, like nationwide, with most colleges canceling their season. So I was a little upset at first, but wasn’t too surprised,” Cox said.

Just a few weeks later, the CAA announced that it would be playing on an adjusted schedule in the spring, which includes six conference games with the option for individual teams to schedule two out-of-conference games. Freshman linebacker C.J. Ford said he is looking forward to playing next semester.

“We’re excited for that. We’re just glad that we get to play football and the season is not completely canceled. [We’re ready to] suit up in the spring and get a few games in and compete for a championship,” Ford said.

The team has been doing what it can to stay ready for the spring. On Oct. 17, the team started full team practices. The team uses individual water bottles for each player, as well as staggered meeting times, social distancing and mask wearing. The players have also been studying game film and working out in the weight room in smaller groups.

“In the weight room, we stay socially distanced. We always work out with our mask up,” Ford said. “We spray and we make sure everything is disinfected, then the next group comes in. We all have our own racks and workout, so we’ve been taking a lot of precautions to be able to be in the weight room and work out and do it safely.”

With the season being moved to the spring, Ford has had a different transition to the football program than previous freshmen. While he was disappointed about the postponement of the season, he said he has tried to keep a positive perspective on the benefits that the spring season provides.

"We're just making the most of the time that we have together in this building when everything's safe.I'm on the field making sure that everyone's doing what they need to do. Building camaraderie that way and making sure that we're on the same page will have the same goals and really just trying to bond when we can."

“Nobody knew that our year would be like this with COVID and everything, but there’s some good things that can come out of it as a freshman at least as far as learning the defense and transitioning from high school to college,” Ford said. “So this time that we’ve had of getting pushed back, that could help freshmen as a positive way to look at it. It gives us a chance to learn more.”

With all the precautions and physical distancing, team bonding is not the same as in the past. But Cox, who is seen as a team leader, feels the Phoenix still have been able to bond through football-related activities.

“We’re just making the most of the time that we have together in this building when everything’s safe,” Cox said. “I’m on the field making sure that everyone’s doing what they need to do. Building camaraderie that way and making sure that we’re on the same page will have the same goals and really just trying to bond when we can.”

In North Carolina, stadiums that hold 10,000 seats are allowed to have fans at 7% capacity, which for Rhodes Stadium is just under 800 seats. It’s still unknown how many people Elon will allow at home games or if fans will be allowed in at all.

“It’s definitely going to look and feel different, but it’s not going to change the game. We’re still going to go out there and do what we need to do on the field, but I’m still hoping that we can get people there,” Cox said. “We love fan support, and it means a lot to us seeing people come and watch the game. So they’ll feel a little different, but when push comes to shove, football is still going to be football even if there’s no one allowed to watch in-person.”

Ford added that the Phoenix’s goal is still the same: compete for a conference championship.

“We still have a job to do, regardless of what fans are going to look like,” Ford said. “It would be nice to play in front of fans, but whatever they decide to do, as far as safety reasons, of course, we accept it. We’re just going to do the job that we have on the field.”

In addition to not knowing if there will be fans or not, there is also concern that some conference teams could potentially opt out of the spring season altogether. Towson University, a conference rival of Elon, recently announced that their football team will not participate in a spring season.

Cox said he was disappointed by the decision as he was hoping to play them. He said the Towson game is always a lot of fun, but also understands the circumstances and respects their team’s decision.

While they’re still unsure as to who their opponents will be come spring time, Cox is confident that Elon’s football team will be ready to play.

“Football’s football, no matter when it’s played,” he said. “Expectations don’t really change just because it may look a little different or be a different season. But still, we’re going to go out, have a great game plan in place, and try and compete the best we can.”