At the monthly regular session, board members heard from the community regarding establishing an anti-discrimintation ordinance and approved the adoption of phase one of the East Haggard Corridor study 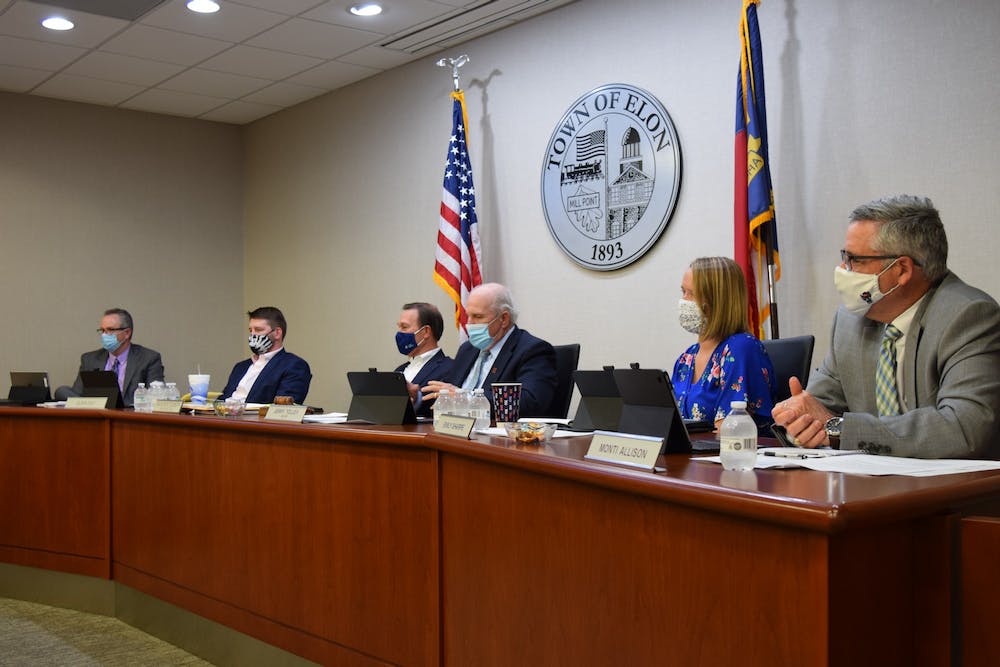 Photo by Kyra O'Connor | Elon News Network
Town of Elon Board of Aldermen members at the May regular session.

At the May regular session, Mayor Jerry Tolley declared the town of Elon will keep its current mass gathering limits in place until after Elon University graduation on May 21. The Board of Aldermen also approved phase one of the East Haggard Corridor Study, reviewed the budget for fiscal year 2021 and heard from community members who spoke in support of adopting an anti-discrimination ordinance within the town.

The board also heard a presentation of phase one of the East Haggard Corridor Study from SEPI Inc., consultants for the study. Started last June, phase one of the study examines Antioch Avenue to York Road. The study looked at the overall safety of the area, expanding the road from two lanes to three lanes and additional on-street parking downtown. Among recommendations for the area were the implementation of a roundabout as well as improving sidewalks and the ability to bike safely on the corridor.

While many survey respondents mentioned closing Haggard Avenue citing safety and specific mention of the convoy that went through campus in the fall, road closure was not recommended by the consultants for the study. Michelle Suverkrubbe, who presented at the meeting, said closing the road would move the harassment to another place, not prevent it.

“They just picked Haggard because it's there,” Suverkrubbe said. “But if you block Haggard, I'm sure they would pick something else.”

The board approved the adoption of phase one of the study at the meeting. Phases two and three are set to begin in the next one to two months, according to Assistant Town Manager Pamela DeSoto.

“We want equality, so let's pass an ordinance working toward that notion to let the community know that we support them, and that we're behind,” Ray said. “I think that as a board, we should try to move forward with the next steps of what does an ordinance look like for our town.”

The board tasked Alderman Davis Montgomery and Alderwoman Emily Sharpe to draft an outline for what a local non-discrimination ordinance could look like in the town of Elon before it meets again in June, and to discuss the possibility of a resolution.

Town Manager Richard Roedner and Finance Director Misty Hagood presented the budget for the 2021 fiscal year to board members. Despite the pandemic, the town of Elon saw an increase in revenue from both property and sales tax, according to the report.