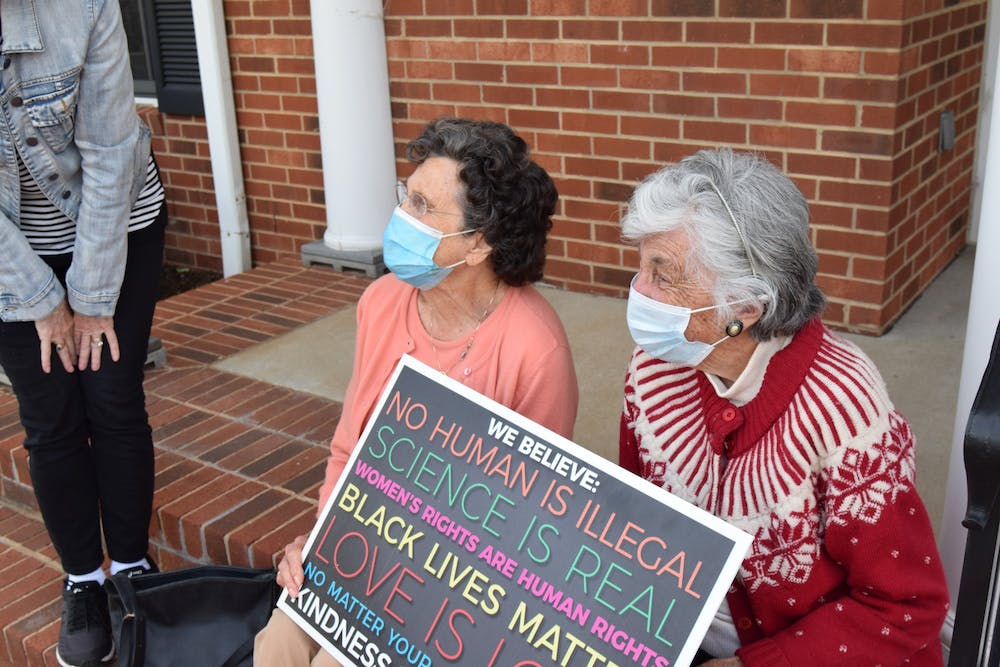 Elon resident Eleanor Ketcham sat on the steps of town hall, holding a sign with phrases like “Love is love” and “Kindness is everything.” Not long after she sat down, she was joined by Elon resident Katherine Floyd. The two 92-year-old women sat side by side outside the town of Elon Board of Aldermen’s May meeting, waiting to listen to other residents speak in support of an anti-discrimination ordinance in Elon.

“We certainly do not want to see any discrimination against any person who comes into a restaurant or comes to the post office or any of the public places,” Floyd said. “We all should be treated equally.”

Until January 2021, local governments in North Carolina were prohibited from defining what discrimination is in private employment or public accommodations due to the adoption of House Bill 2 in 2016 and House Bill 142 in 2017. HB2, also known as the “bathroom bill,” did not extend protection from discrimination to members of LGBTQIA communities and restricted the use of restrooms and multi-occupant changing facilities in public schools, government buildings and public college campuses, designating the facilities for use by people based on their biological sex, or sex assigned at birth.

The controversial bill was repealed in 2017 and replaced by HB142, but it did not allow local governments to pass their own ordinances until this year. Anti-discrimination ordinances have been adopted by eight towns and municipalities across the state, according to Equality NC, an organization that advocates for LGBTQIA individuals in North Carolina.

“It's extremely important because as a municipality, we're under the framework of the federal government and the state government, and then we have our county government,” Ray said. “There's no legal protections for people in the LGBTQIA community to be not discriminated against.”

Other anti-discrimination ordinances protect people from discrimination based on many factors, including protecting someone from not being hired because they are pregnant or because they served in the military. The Board of Aldermen discussed at both the April and May meetings who a potential ordinance would protect, as well as what types of discrimination it would concern.

Alderwoman Emily Sharpe said after looking at other ordinances, she believes adopting something similar would be in line with the town’s values.

“How many times have we all heard, ‘You're just Elon?’ I've heard it. I'm sure we've all heard it. ‘You can't do that, you're just Elon,’” Sharpe said. “I think that's why we should do it, because we are Elon, and I think we are in a really unique position to take the lead on not just this issue, but a lot of issues that I think would help not just our local community but our broader community as well.”

Board members Montgomery and Sharpe were tasked with developing an outline for what a possible ordinance would look like for the June meeting as well as drafting a possible resolution.

In Chapel Hill, the town can choose how to enforce the ordinance, including but not limited to requiring the person or business found to be discriminatory to correct the action. In Greensboro, residents who experience discrimination are able to file a complaint which will be investigated by the Human Rights Commission.

Alderwoman for the town of Elon

“The idea of a punishment being associated with this, I want to think a whole more about how you institute something like that,” Montgomery said. “The idea of treating everyone equally is exactly what we want, and when I say everybody, I mean everybody … I just want to be very careful. I want to be deliberate. I want to be thorough. I want to be well said.”

While Greensboro and other local governments who passed anti-discrimination ordinances have human rights committees, the town of Elon does not. Wendy Scott, associate dean for academic success and professor at Elon Law in Greensboro, said she wonders how Elon can enforce an ordinance without a department or similar committee.

“Either the town is going to use not having an enforcement mechanism as a barrier or an excuse not to pass orders because they don't want to put themselves in a position of being liable for any kind of discriminatory action, because that means money or time, or there are various ways to enforce an ordinance,” Scott said.

Alderman Mark Greene said he is against discrimination of any kind, as he believes all of the board members are. But through adopting an ordinance like this, Green said he fears the town could become “the police” on discrimination.

In addition to enforcement, Alderman Monti Allison said he thinks the board needs to define what it does and doesn’t enforce. Previously, HB2 and HB142 discussed discrimination within public accommodations, such as employment or public places, which does not address discrimination residents experience walking around town and what students face while on university property.

“As much as we’d like to stop that, that's the freedom of speech that people have the right to do. So I don’t want people to think that this is going to eliminate that. Time will take care of that,” Allison said. “We have to make it clear what the ordinance would do and what it wouldn't do. Otherwise, people are going to be disappointed either way.”

Elon University’s Student Government Association recently passed its own anti-discrimination resolution reaffirming the organization’s previous stance on HB2. In the resolution, SGA stated it supports any attempt by the town of Elon Board of Aldermen to provide a more inclusive environment for LGBTQIA individuals within the town.

Jack Corby, student body president, spoke during the public comments section of the meeting, as well as Britt Mobley, president of the class of 2024. Mobley said while he is only in his first year at the university, Elon has quickly become his second home. But for himself and other Black students, living in the town of Elon is not always easy.

“It is often frightening, and honestly confusing, to understand why people would yell at us from the road just while we walk to class,” Mobley said. “I cannot speak for everyone else because I don’t identify like everyone else, but as a Black man on campus, I urge you to pass this ordinance.”

Professor of entrepreneurship Elena Kennedy almost did not move back to North Carolina after the passage of HB2 in 2016. At the meeting, Kennedy shared with board members that she and her husband considered living in Durham and commuting to Elon, as they were hesitant to move to a rural part of North Carolina.

“Had there been an affirmative statement like a non-discrimination ordinance in the community, it would have made us a lot more comfortable early on,” Kennedy said.

Former Board of Aldermen member John Peterson had not set foot in town hall for nearly two years, but he said speaking in support of an anti-discrimination ordinance was important enough for him to come back.

“The important thing, at least for me as a former colleague, as a citizen, as friend and as a Black man in the town of Elon, it's what it says from a leadership perspective,” Peterson said. “To be proactive, to be supportive of this non-discrimination ordinance, again, understanding that we don't know exactly how it will work out as far as the teeth of it, how we will enforce it and those kinds of things, but that's not the important thing to me.”

For town of Elon resident Sugelema Lynch, the ordinance would not just support LGBTQIA residents, but it would support her family. Lynch’s daughter identifies as part of the LGBTQIA communities, and Lynch said an anti-discrimination ordinance would protect her daughter should she ever be discriminated against.

“I would like for there to be some things to hold people accountable if she were not allowed to get a job or kicked out of a business for that,” Lynch said. “Especially because Elon hosts so many people from all over the country and even the world, I just don't understand. I would imagine they would want to be the leader in that kind of progressiveness during Alamance County.”

Rev. Randy Orwig, senior pastor at Elon Community Church, said as a leader in an open and affirming church, he has personally helped some youth members who are transgender get jobs and sees firsthand how they are discriminated against.

“If there was a non-discrimination ordinance, maybe there could have been something, it could have been dealt with,” Orwig said. “But when you don't have those kinds of ways of dealing with it, it just is an unfortunate moment.”