The last meeting included approving the expansion of a menstrual product pilot program, creation of student art exhibit and the organization’s stance on HB2 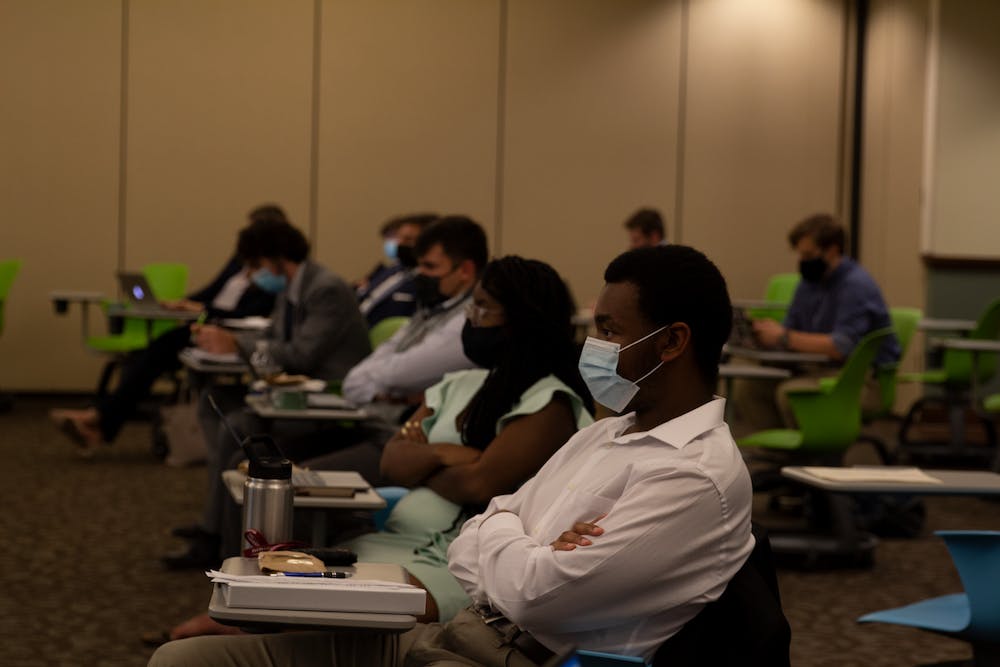 
Members of Elon's Student Government Association attentively listen to Chase Solomon and Matisse Gilmore presenting a new bill about the creation of a student art exhibit in Moseley Center on May 6.

At the last Student Government Association business meeting of the academic year on Thursday night, SGA discussed the renewal and extension of the menstrual product pilot program, the organization’s stance on the North Carolina House Bill 2 and the creation of a student art exhibit in Moseley Center.

The SGA passed a bill for the renewal and expansion of the menstrual product pilot program at Elon. The bill was headed up by class of 2024 Senator Genesis Tolbert and Vice President Chloe Higgins.

“We hope to give students access to products for emergency use,” Higgins said.

The bill continues the pilot program that was first launched by SGA in partnership with Elon Feminists for Change, Equality and Transformation, which was originally given $11,000 when it was first passed in 2019. The renewal and expansion of the menstrual pilot program was an initiative in Student Body President Jack Corby’s platform.

Tolbert and Higgins said data collection on the pilot program will take place over the next two years and will have student surveys and feedback to gauge frequency of usage of the menstrual products in each bathroom. SGA plans to reevaluate the pilot program in the spring of 2023.

SGA approved a bill regarding the creation of a student art exhibit in the Moseley Center. The initiative was led by class of 2023 President Chase Solomon and class of 2022 Secretary and member of the One Phoenix committee Matisse Gilmore.

SGA plans to allocate $15,000 from its reserve fund toward the creation of the art exhibit. The construction of the project will cost approximately $5,500, according to Solomon and Gilmore.

The initiative aligns with the mission of the Student and Iconic Art Committee to “allow for more student expression on campus in line with Elon’s aesthetic values,” according to the proposed bill. Art placed on exhibit in Moseley Center common areas will be selected by the Student Art and Iconic Committee, said Solomon and Gilmore.

Solomon said the creation of the exhibit will give students a chance to put their art pieces on display for all of campus to view and SGA plans to expand the exhibit in the coming years.

“We hope to expand not just in the initial exhibit,” Solomon said. “Adding in student art in other places such as the Belk Library and the Innovation Quad.”

SGA passed a resolution reaffirming its stance on North Carolina House Bill 2, The Public Facilities Privacy & Security Act. The organization reaffirmed its commitment to an inclusive campus community and equitable treatment of students on campus and individuals throughout North Carolina, according to the resolution.

North Carolina House Bill 2 was passed by the North Carolina General Assembly in 2016. The bill states that in public facilities, such as government buildings and schools, individuals may only use restrooms and changing facilities that correspond to the sex identified on their birth certificates.

SGA hopes the resolution on the North Carolina House Bill 2 will allow LGBTQIA individuals to feel respected and included in spaces on campus and in the surrounding community. Several local towns, such as Chapel Hill, have passed ordinances similar to the SGA resolution, and the town of Elon Board of Aldermen discussed adopting a similar ordinance at their last meeting. The board is expected to discuss the ordinance again on May 11.

“It’s a call to action,” Kays said. “And so I’m hoping that will be well received by town of Elon and … the senior staff when they get that legislation, and that that will be a good motivator for them to kind of hold up this level of diversity and inclusion that they can press and push and have action.”