‘It has been far too long’: Derek Chauvin murder conviction evokes sense of justice for Elon community

Chauvin was found guilty of two counts of murder, leaving students and local activists feeling a sense of temporary relief after months of protests 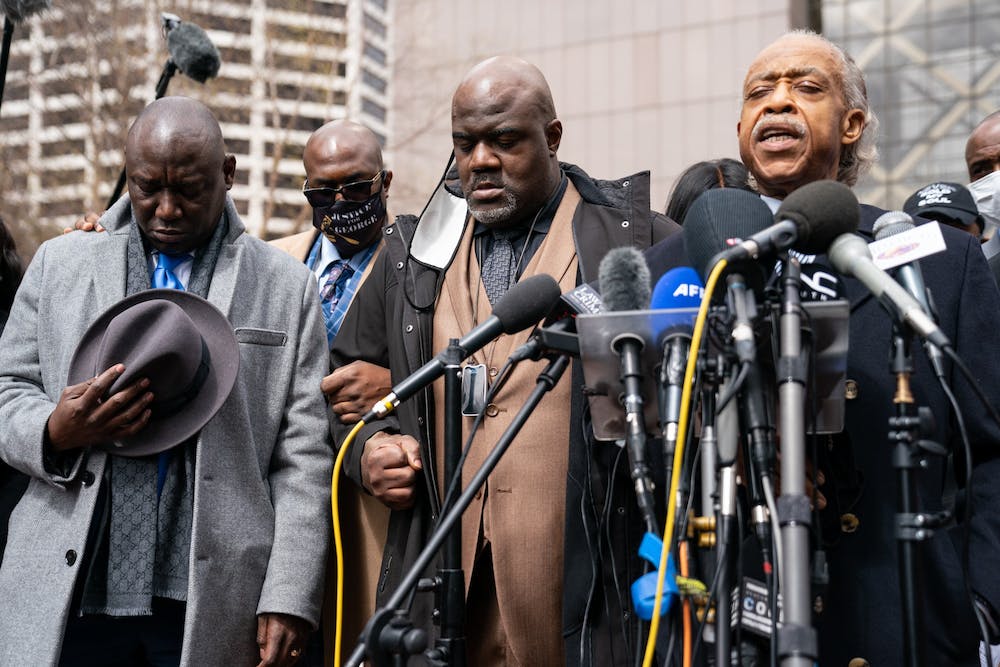 The Rev. Al Sharpton, right, Philonise Floyd, center, and attorney Ben Crump, left, along with others, lead the family of George Floyd and Daunte Wright in prayer outside the courthouse during closing arguments in the Derek Chauvin trial on Monday, April 19, 2021, in Minneapolis. (Jason Armond/Los Angeles Times/TNS)

Elon University sophomore Kennedy Boston sat by Lake Mary Nell watching a live stream recorded over 1,000 miles away in Minneapolis. She began crying after the verdict for George Floyd’s murder was announced.

“There was something so freeing in that moment of just like, we did it. Something's actually happening,” Boston said. “It's not really justice, justice would have looked a lot different, but it's still something.”

Derek Chauvin was found guilty of three charges for the murder of Floyd: second-degree unintentional murder, third-degree murder and second-degree manslaughter. Chauvin faces up to 40 years in prison, and his sentencing is expected in the next few weeks.

Following the verdict, Floyd’s brother Philonise Floyd said he and people around the world “were able to breathe again.”

“The whole world was seeing his life being extinguished and I could do nothing but watch, especially in that courtroom over and over and over again as my brother was murdered,” Floyd said in a press conference following the verdict.

For Boston, this was the culmination of months of protesting locally and activism. Boston herself protested in Alamance County and Graham over the summer.

“The fact that it wasn't really the justice system that got this done, it was people keeping the pressure on it,” Boston said. “It feels good to know that not only did I have a part in that, but that's something that we did mattered.”

Standing behind Floyd and holding his shoulder was Burlington native, activist and Greensboro pastor Rev. Greg Drumwright. Drumwright has been in Minneapolis with the Floyd family throughout the trial. In a livestream on Facebook, Drumwright began to cry upon hearing the verdict.

“Our labor was not in vain … I’m thankful to God,” Drumwright said through tears. “Keep fighting.”

Following Floyd’s murder last year, Drumwright has been active in Alamance County, where he protests against police brutality and racial injustice at the Confederate monument in Graham. Drumwright was arrested for his involvement in leading a march to the polls rally in November.

Lawmakers across the country, and in multiple levels of government, have reacted to Chauvin’s murder verdict including North Carolina Gov. Roy Cooper.

“I appreciate the jury’s work for justice,” Cooper wrote in a Tweet. “George Floyd’s death shouldn’t have happened and we must continue to work to bring positive change to our state and country.”

President Joe Biden gave remarks on the verdict and recognized how "traumatic and exhausting" the trial was for individuals watching it unfold across the country.

"In order to deliver real change and reform, we can and we must do more to reduce the likelihood that tragedies like this will ever happen and occur again," Biden said. "To ensure that Black and brown people — or anyone — so they don’t fear the interactions with law enforcement, that they don’t have to wake up knowing that they can lose their very life in the course of just living their life."

Elon University President Connie Book released a statement following Chauvin’s conviction in recognition of how the trial has “deeply traumatized” members of the Elon community.

“It is a historic verdict in a case that tore at the fabric of our nation and starkly exposed the injustice faced by Black Americans and other marginalized people,” Book wrote. “This is a defining moment — an opportunity we must seize to make changes that are long overdue, including criminal justice reform.”

In her statement, Book recognized the need to address issues of equity in the university’s strategic plan, Boldly Elon, and the core curriculum. The university will hold an online panel April 28 at 7 p.m. to discuss race, policing and justice.

“Please join me in taking care of those who are hurting in our community from the impact of this case,” Book wrote. “Longstanding issues of injustice have affected many people close to us, and now is the time to stand with these members of our community and provide support and compassion.”

"It's almost unbearable to handle because you sit and you have your predetermined notions of what happened and what has gone down and have your own decision that you want to happen. As a Black man, you don't have faith in the judiciary because every other time it hasn't been faithful to us."

Elon freshman Britt Mobley was not following the trials because he had already assumed what the results would be.

“It's almost unbearable to handle because you sit and you have your predetermined notions of what happened and what has gone down and have your own decision that you want to happen,” Mobley said. “As a Black man, you don't have faith in the judiciary because every other time it hasn't been faithful to us.”

Mobley would still like to see reform in the judicial system.

“It has been far too long to where police officers are held accountable and there are laws that protect them from being held accountable,” Mobley said. “We saw this on video, all the proof is in front of us right, but there's a lot of instances in cases like Tamir Rice, Michael Brown, Trayvon Martin where they shouldn't have been killed.”

Lillian Argabrite, an Elon University freshman, and her younger sister Caroline sat in the front row at the first show of the annual Rockapella concert tonight in Alumni Gym.

The Elon University football team started out hot on Family Weekend with two touchdowns in the first quarter against University of Richmond.