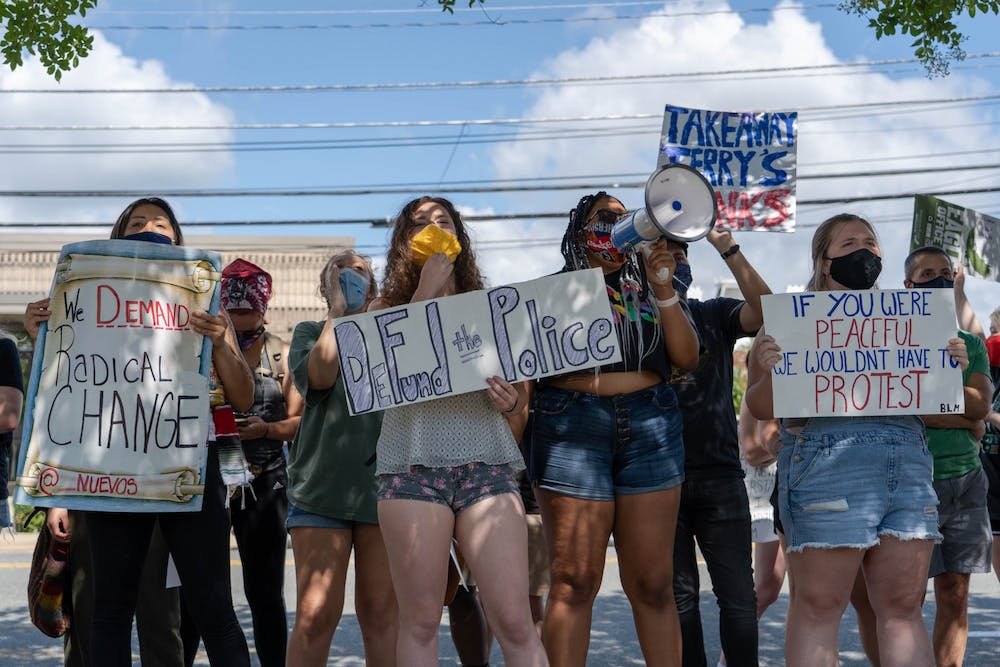 This comes after the sheriff’s office announced on behalf of the Graham Police Department, that Graham Police would no longer be granting permits to protesters for the “foreseeable future.” The announcements came after demonstrations calling for the removal of the Confederate statue in Graham. Johnson and the sheriff’s office are not responsible for granting permits, but did use their platform to let the public know about this decision.

Originally, the organizers of the protest outside the sheriff’s office were intending the demonstration to be in support of the right to protest, according to Elon University sophomores Kennedy Boston and Kasey Fountain, who organized the demonstration.

But before the protest, the North Carolina American Civil Liberties Union filed a lawsuit against the city of Graham and the sheriff’s office, and a judge granted a temporary restraining order. This order temporarily blocks the ordinance that requires a protest of two or more people to obtain a permit.

But Boston and Fountain thought Johnson should still resign. In addition to his handling of the recent protests, they disapprove of his past treatment of minority communities.

“We did our research and discovered his really long history of racial bigotry and xenophobia towards Latino people” Fountain said.

From the department’s associations with U.S. Immigration Customs and Enforcement, Alamance County made $3.6 million in 2019 for holding ICE detainees in the Alamance County Detention Center. At the time, Johnson reaffirmed his belief that undocumented immigrants are “criminals” after ICE arrested and detained more than 200 people in North Carolina.

According to Byron Tucker, the public information officer for the sheriff’s office, they had no objections to the student protest.

“There were some folks that came by that weren't too happy with them,” Tucker said. “Should they have threatened the protesters, it would have been our job to go out and protect [the protesters].”

While the protesters did receive some negative comments from people driving by in cars, many others were honking and yelling words of encouragement to them.

Originally, Fountain planned to have Johnson come speak with the group and answer questions but, after speaking with protesters from the county they decided against it.

Courtney Guthrie, an Elon senior and Alamance County residence, was one of the members who helped make this decision, as they did not want to be “partnered with the cops.”

“It is always important to consider who you are protesting on behalf of in Alamance County because there are Black and Brown people who have lived here their entire lives,” Guthrie said. “They have lived under the eyes of the Confederate statue and Terry Johnson their entire lives.”

However, according to Tucker, Johnson’s reasoning for not coming out was due to the protesters actions.

“Somebody started shouting profanities, at which point that is very close to disorderly conduct,” Tucker said.

The sheriff’s officers let the protesters know this.

“They were warned about the language because we're pretty thick-skinned, but that is a city street with folks not only doing business at attorney's offices across the street, and there's a lot of court people and citizens that are going back and forth” Tucker said. “It wasn't very appropriate, so the decision [not to talk to protesters] was made there.”

According to Fountain the protesters weren’t doing anything wrong because “it is not illegal to swear.” She was also upset because she talked to the sheriff’s office beforehand.

“I spent two hours with them on the phone before the protest trying to figure what we could and couldn’t do to make sure nothing like this would happen,” Fountain said.

As for the future, Fountain and Boston think it is important that Elon students understand what is going on in Alamance County.

“As Elon students we live in Alamance and a lot of us register to vote in Alamance, so we still have an effect on the outcomes on the sheriff's vote,” Boston said. “I think now people are more aware how important local city level voting is.”

But they also agree their voices should not be put over those of the locals.

“We both 100% believe the Alamance County residents platform should be elevated above ours,” Fountain said.”They have lived here longer and have to go through this everyday on a daily basis; we are just here for four years.”