Joe LeMire, University of Wisconsin Milwaukee chief of police, is the final candidate for the position 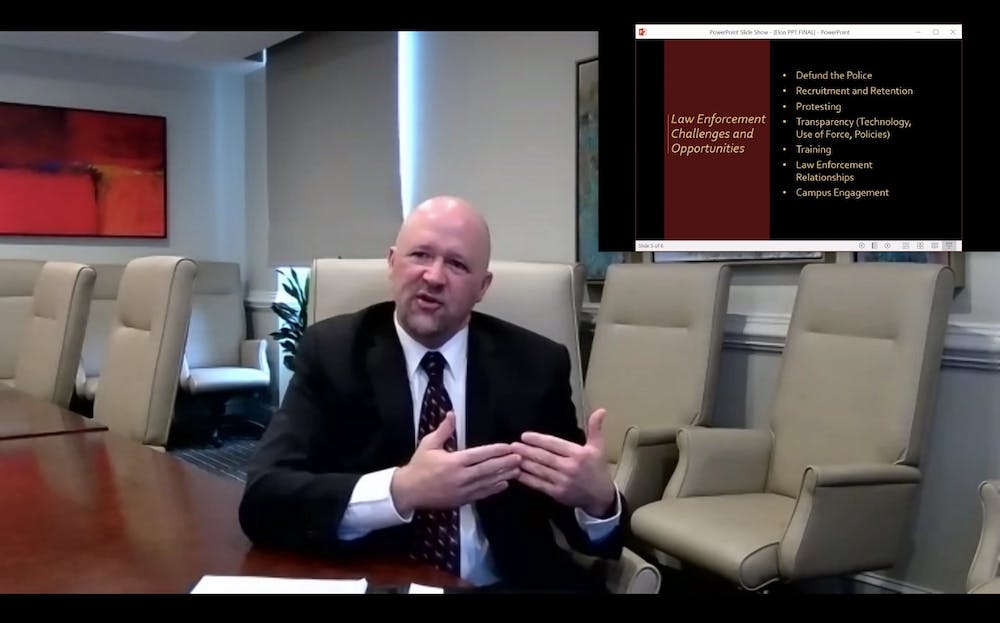 Joe LeMire, the chief of police at the University of Wisconsin Milwaukee, gives a presentation for the position of Elon University's director of campus safety and police.

Updated Feb. 3, 2021, to clarify the number of final candidates.

Joe LeMire didn’t start out in campus police and security — he began his law enforcement career in the Potawatomi Indian Community Tribal police department and later served in the public safety department in Escanaba, Michigan. LeMire now serves as the chief of police at the University of Wisconsin Milwaukee. And now, he hopes to be the new director of campus safety and police at Elon University.

LeMire presented on-campus as the final candidate in the search for Elon’s next chief of campus safety and police. There were five semifinalists and as the final candidate, LeMire was invited to speak on campus. He presented his background, leadership philosophy, their vision for campus policing and the challenges and opportunities in campus policing to students, faculty and staff, as part of the fifth and final stage of the interview process.

The search for a new chief of campus safety and police began last March but was put on hold due to the pandemic and restarted in the fall. Shuman said in October that the search committee hoped to choose a new chief by December. Doug Dotson has been the interim director since last Janurary.

During his presentation, LeMire said his leadership style focuses on servant leadership. LeMire said officers will operate with compassion, empathy and professionalism by making sure his officers are well-trained and educated on how to interact with the community.

“If I’m putting them out in the community to deal with the community, I have to make sure they are my biggest stakeholders,” LeMire said. “I don’t think you can be successful if you don’t concentrate on their purpose.”

There are three pillars to LeMire’s approach to campus policing: community engagement, crime deterrence and enforcement of laws and rules. For LeMire, these three pillars are all of equal importance — focusing on one more than another can have negative side effects.

“If you do a lot of law and rule enforcement and you don't engage in the community, then you build up this reputation of negativism that when an officer arrives, and only there for negative reasons, they are only there to do some kind of enforcement,” LeMire said. “If all you do is community engagement, you don’t enforce the law, then you don't have a lot of accountability in your community.”

LeMire identified seven areas in campus policing that he believed could be challenges as well as opportunities: defunding the police, recruitment and retention, protesting, transparency — which included technology, use of force and policies — training, law enforcement relationships and campus engagement. While all of these areas could prove difficult, LeMire said each had their own opportunity for law enforcement officers to do better, as well.

During the question and answer portion of the presentation, LeMire addressed systemic racism in policing and defunding the police, two ideas that have been prominent in the months following the killing of Breonna Taylor and George Floyd by police officers. LeMire said he believes there is systemic racism and racial bias committed by officers themselves, as well as behavior that appears to be racist.

“There's racism, that piece, that has to be eliminated,” LeMire said. “And then there's the piece of how enforcement with a lot of authority to enforce the law, the authority to take someone's freedom away from them, arrest people, how do you respect to the level that when you're dealing with the public you treat them with respect.”

As calls for police departments to incorporate social work and mental health professionals into their policing efforts, LeMire said he believes there is space in law enforcement to reallocate resources to bring support staff in or train police officers to handle situations like mental health crises.

The committee will give their recommendation for the next director of campus safety and police to President Connie Book.

Miranda Ferrante contributed to the reporting of this story.