University, town to take actions to improve safety in Elon 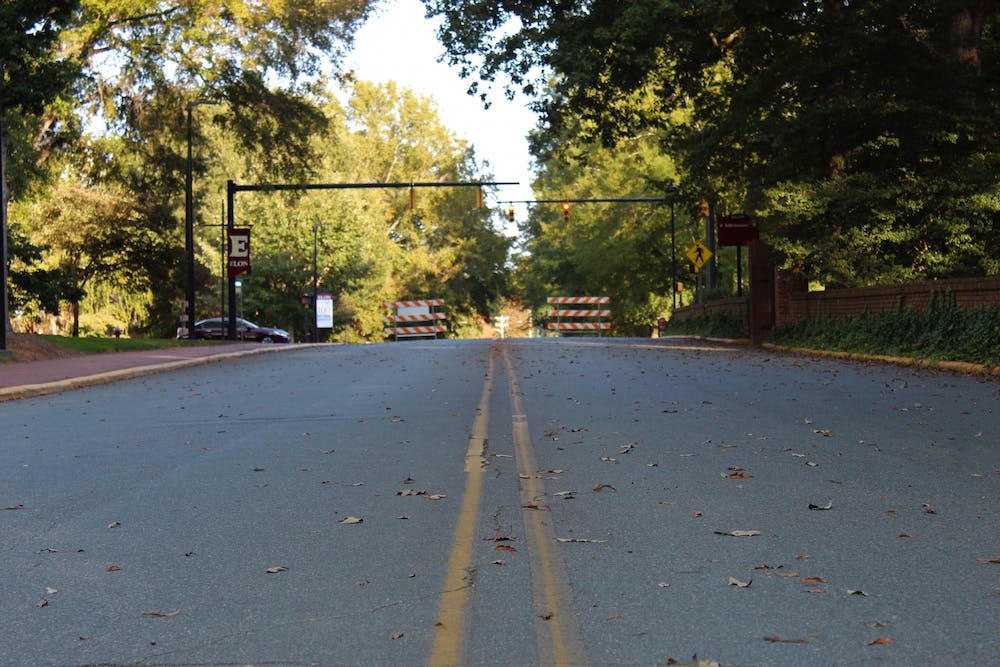 
East Haggard Avenue has been closed several times during the 2020 fall semester. While the road has closed for special events, the university has previously proposed that the road be closed for safety measures.

After students expressed their concerns and the establishment of a roundtable by Elon University President Connie Book, “immediate actions” are being taken by the university following a convoy in support of President Donald Trump that drove through Elon in September.

Among the immediate actions put forth is a commitment on the university’s part to use an alert system, such as E-alerts or LiveSafe, to notify students, faculty and staff of upcoming disruptions or distractions. Patrick Noltemeyer, chief of staff, participated in the roundtable this fall and said the alerts will allow students to be more aware of situations occurring on campus.

The university is also increasing the number of traffic cameras on campus as well as collaborating with the town of Elon to share bias reports and working with the town regarding potential street closures in the future, if needed. Noltemeyer said he thinks the recommendations from the roundtable will be similar to recommendations coming from the mutual aid agreement committee, as well.

“That relationship with the town is vitally important,” Noltemeyer said. “One of the best outcomes of the roundtable is further enhancing that partnership, and for both the town and the university understanding the need for greater communication and partnership.”

Town Manager for the town of Elon Richard Roedner, also on the roundtable this fall, said cameras on campus would not have anything to do with the town, however actions regarding public roads, such as East Haggard Avenue, would be town jurisdiction.

One recommendation put forth by the round table is collaboration between the university and the town of Elon on potential street closures or traffic diversions.

“The Round Table did include in it’s list of suggestions or comments the idea of closing [East Haggard Avenue] permanently. To date, we have not had any formal discussions in the university about doing that,” Roedner said. “From the town's perspective I have not heard any support from town officials for permanent closure.”

The town of Elon is currently in phase one of a corridor study regarding Haggard Avenue. The study’s goal is to determine ways to improve Haggard Avenue for pedestrians and bicycle travel, according to Planning Director Pam DeSoto, the lead town of Elon staff member on the project. DeSoto said the intent of the study, conducted through SEPI incorporated, is to find ways to make Haggard Avenue safer, and phase one should be completed by the end of the year.

The Board of Aldermen has discussed East Haggard as well, talking about how to collaborate with the university and serve the town of Elon community members. Currently, the town of Elon requires 60 days advance notice for closures of local roads, such as the applications the university has submitted for events like the public art display after the election or Homecoming weekend. Mayor Pro-tem Davis Montgomery said he thinks closing any road has an impact on the wider community.

“Where we currently are, I think we have … the possibility of taking permit, after permit, after permit, to where the road virtually stays closed so many times out of the year,” Montgomery said. “On the other end we could have a very restricted approach that says it can only be closed for something that has something to do with a very large event, an unusual event or something that has a life safety issue associated with it.”

Aldermen Mark Greene said the residents he spoke with did not like the road being closed as often as it has been. This year the university has submitted several special events permits for weekends, like events on Halloween, and days during the week, like the public art display after the election.

Not all requests for closure have been granted, Roedner said in the meeting.

While board members discussed the idea of limiting the number of times a special events request for a road closure could be submitted by any one group or entity, Alderwoman Emily Sharpe said the board should be careful when setting limits.

“In restrictions that we put in place I think we just need to be careful to ensure that we don’t pigeonhole ourselves into having to deny something that really does warrant closure,” Sharpe said.

The board decided to continue the conversation on road closures at their next meetings for further discussion.