As the discussions come to a close, Elon University students, staff and faculty reflect on discussions and recommendations to Book for action in the future 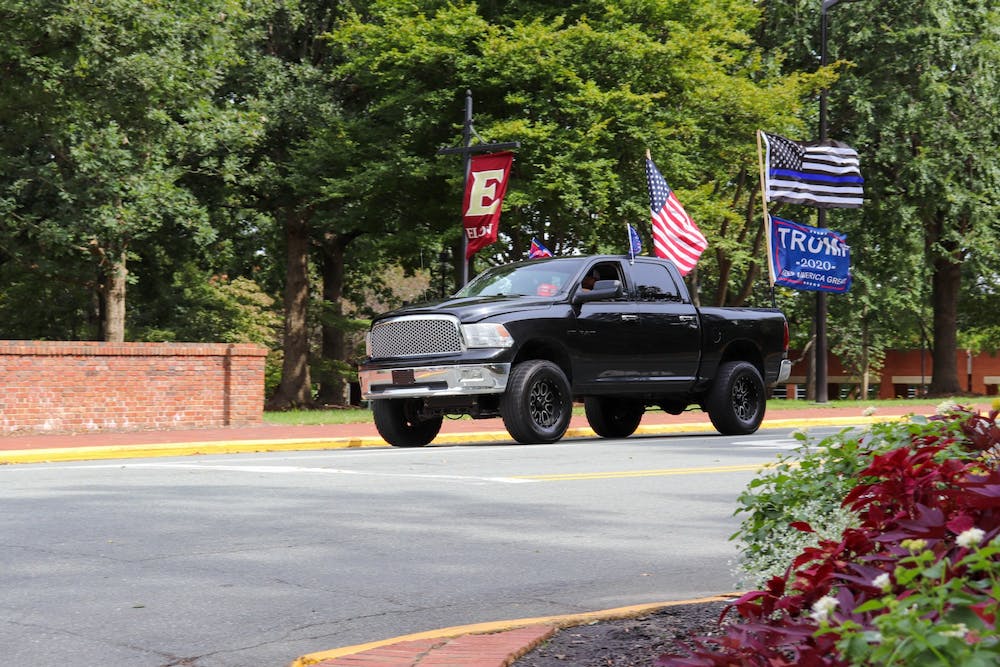 A parade of vehicles in support of President Donald Trump drove through Elon University’s campus as part of a convoy organized by a member of Alamance County Taking Back Alamance County (ACTBAC), a group designated as a neo-Confederate organization by the Southern Poverty Law Center.

The roundtable on the Trump caravan gave its recommendations to Elon University President Connie Book on Oct. 19. The list included 16 different recommendations of action that could be taken to boost campus safety.

The group was formed following the pro-Trump caravan, which traveled through campus, and was made up of students, staff and faculty appointed by Book. They held three virtual meetings to discuss the caravan, explore what should happen should another situation like the caravan occur and what measures can be taken to protect the Elon community going forward.

The third meeting discussed recommendations put forward by the roundtable. The recommendations included using E-Alerts or creating an equivalent system to notify students of protests, caravans, parades or convoys in the area, as well as increasing the number of street cameras and social listening. Social listening involves collaborating with leaders in Alamance County, Burlington and the town of Elon to develop strategies to best address concerns of public safety, according to the recommendations document.

According to participants, Book was not present at the first two roundtable discussions, but did participate in the final one, where the recommendations were presented to her. Senior Tyler Chavez, one of the 21 roundtable participants and someone who witnessed the caravan firsthand, said he was under the impression Book would be present at all three meetings. In an email to the campus community, Book said she looked forward “to receiving the recommendations” of the roundtable, but did not indicate she would be present at the discussions.

Talking to administrative staff in the first two discussions — rather than asking questions to Book directly — did not feel as helpful for Chavez.

Sophomore Kasey Fountain said she had been feeling frustrated with how the university administration had acted in the past, which was one of the reasons she wanted to be involved in the roundtable. However, Fountain also did not find the roundtable productive, and said students were interrupted by faculty and staff during the discussions.

With Book present at the third meeting, Chavez said he felt he was able to make his voice heard. Freshman Mason Mosley said having Book attend the third discussion made a difference and made him feel like the discussion was a lot more productive.

“When she’s on there, now we’re actually moving in a certain direction,” Mosley said. “She has the power to make the changes, before we were just talking.”

Prudence Layne, professor of English, said the roundtable had a lot of “good, diverse perspectives” from students especially, as the student members of the roundtable included campus leaders and student organizers.

The perspectives of students on campus was what Elon University Police Department Sergeant Joel Thomas liked most about participating in the round table. Thomas, who said he attended one full and one partial discussion out of three, said listening to the students was important and allowed him to hear what they thought should be fixed moving forward.

“I think one of the most important things is just listening to what people have to say,” Thomas said. “Because if you’re not listening and not hearing what they have to say, then how can we fix it?”

While some of the recommendations discussed, such as more communication via E-alerts, were on students’ minds, roundtable member and sophomore Kennedy Boston said social listening was not a solution she was hoping for.

Another recommendation of the roundtable is to engage in more educational opportunities surrounding the first, fourth and fifth amendment. Steve Friedland, professor of law, said it is important for students to understand their rights and the rights of others, and he hopes that education is part of the action taken in the future.

“They need to know what that means and there is a right to freedom of speech, or not to speak. And that’s not available to all speech,” Friedland said. “The other[s are the] fourth and fifth amendment. And this involves the police, because the police do play a role at Elon and of course in society in general.”

As a member of the search committee for the new director of campus safety and chief of police, Layne said she believes some long-term changes will occur when a new person is selected for this role.

“Once we set some benchmarks of what we want to achieve, there’s some things that I think will happen with the selection of a new chief, and his or her vision and plans and how that fits into the university’s own strategic planning,” Layne said. “The hiring of a new chief would be the first way of shaping a long term vision.”

While frustrated with the roundtable discussions, Boston said she would participate again if the group is reconvened. Boston said because the university has task forces and roundtables often, helping students understand what happens at these groups is important to her.