At the agenda setting meeting, President Book urged board members to consider a temporary closure of East Haggard Avenu 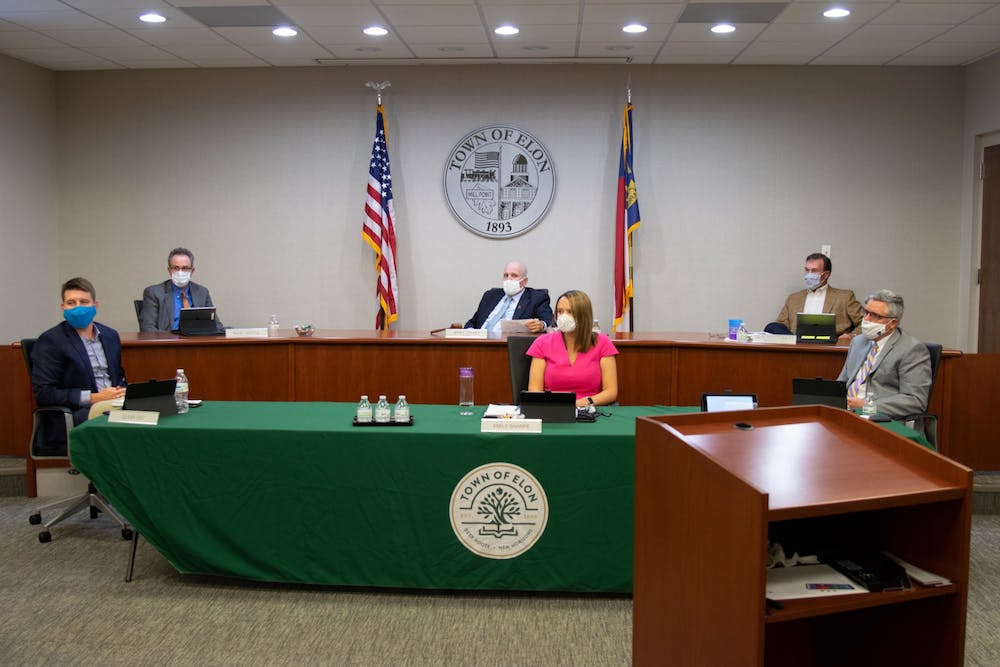 Photo by Kyra O'Connor | Elon News Network
The town of Elon Board of Aldermen at their Oct. 5 meeting discussing the proposal to close East Haggard Avenue.

Elon University President Connie Book addressed the Board of Aldermen regarding a university proposal to temporarily close East Haggard Ave at the agenda setting meeting on Monday. The proposal submitted by the university suggested using the street to increase outdoor space for recreational and educational purposes. Book also said safety concerns are another reason to close the street, citing the pro-Trump parade that drove through campus as well as the shooting outside of Elon’s Chabad house last fall in her public comment.

“Each of these acts are designed to create fear,” Book said. “Tonight I'm asking you to join the university in doing what is in our power, to refuse to be silent, to refuse to do nothing.”

The proposal asks for the support of the town of Elon to temporarily close Haggard Avenue from the intersection of Williamson Avenue and N. O’Kelly Avenue from Friday afternoon through Sunday evening for the remainder of the semester. This stretch of road is often closed for Homecoming weekend, move-in and parent’s weekend. The temporary weekend closure, which is similar to efforts at Wake Forest, is to help students socialize in lower-risk ways.

In her public comment, Book also spoke to the security purposes for this closure, which was not included in the original proposal submitted Sept. 28. Incidents such as trucks following students and shouting sexist and racial slurs, as well as people threatening verbal harassment from vehicles as well, were mentioned by Book at the meeting.

“It's very intentional, it's targeted harassment,” Book said. “This is not like the free speech issue, this is harassment.”

Following the temporary closure, Book suggested a group working towards a long-term solution.

“It's a band aid, but it's an important band aid, and I think particularly right now for our community as a whole, and the town,” Book said.

Town of Elon Police Chief Kelly Blackwelder said that from a legal perspective, police action cannot be taken regarding speech. However, according to Blackwelder, if the statement said on public property is with the “intent to evoke a response,” such as shouting a racial slur, that will breach the peace, and the police can take action.

Blackwelder said there are town ordinances that could help “curb the problem,” which is one option she and Town Manager Richard Roedner said they would look into. One of the actions the university can and has taken, according to Book, is issuing no trespass orders to individuals. Book said that in the last week, eight such orders were issued.

The closure of the street raised concerns from board members about the amount of people present at the social events. In the town of Elon, outdoor gatherings are still limited to 25 people. Roedner also said some downtown business owners were concerned about diverting traffic during the weekends.

Quinn Ray, a board member and a downtown Elon business owner, said a closure of Haggard Avenue could have an impact on businesses, especially with opportunities for students to eat on campus at food trucks during events rather than at downtown restaurants.

Roedner said he asked the university for the proposal to be more inclusive to businesses. Instead of having food trucks for on-campus events during the weekend, local businesses could hold pop-up’s. Alderwoman Emily Sharpe said because the town of Elon is funded primarily by sales tax, the issue of business downtown is a concern the board needs to consider.

Despite the possibility of businesses suffering, Ray said helping the university and community feel safe is an initiative the town should consider.

“As a town, we should stand for denouncing this hate that is happening instead of justifying that they’re allowed to do this,” Ray said. “As a town we scream inclusiveness, we want equality for all, and justifying the allowance of hate is not standing for inclusion.”

During her public comment, Book said she sat outside with students in an outdoor classroom a few weeks ago that experienced disruption from people in trucks shouting as they drove by. Despite initially being against the university proposal, Sharpe said Book’s additional comments on safety, especially with outdoor classrooms, Sharpe is much more likely to support than the original proposal.

“Imagine you are sitting and hearing your professor speak, and you hear a racial slur, or females getting catcalled from the street because that’s your classroom,” Sharpe said.

Blackwelder said the meeting was the first time she heard that there were disruptions in classrooms. There are specific statutes that allow officers to cite disruptions during outdoor classes.

“That’s one of those alternative measures that could be in place by… having an officer on East Haggard,” Blackwelder said.

Board member Mark Greene said while he agrees that incidents like the caravan through campus are not right, he is not sure closing Haggard Avenue would stop incidents from taking place.

“Is this the solution? Is this going to stop catcalling on Williamson, and O’Kelley, and Antioch,” Green said. “Is it going to stop that?”

Another solution Roedner mentioned was closing off one lane on Haggard, rather than closing the entire street. Mitigating traffic and utilizing the town’s control over local roads may be options for the town to take.

“We’ve got control of our local roads if we wanted to try some strategic traffic management that would disrupt traffic flows,” Roedner said.

As Student Government Association President, Robbie Miley said his perspective on the issues facing the Elon community has grown after attending and listening to the discussion with the Board of Aldermen.

“They represent the broader Elon community, whereas myself or President Book or really any of the students that come here represent students,” Miley said. “I think that’s why we don’t always see things the same way, because we represent two different groups of people.”

The impact a road closure would have on the local businesses is something Miley said he did not think about, because he was thinking about his constituents, the student body.

In addition to closing Haggard Avenue, the board also discussed the Elon University major development plan, amendments to the Town of Elon code of ordinances and the creation of an economic development committee.

The board did not support or approve the proposal, and it will be discussed further at next week’s meeting.