Student artists continue to showcase work online and on campus

Elon’s Student-Made Store has grown significantly over three years, even during the pandemic 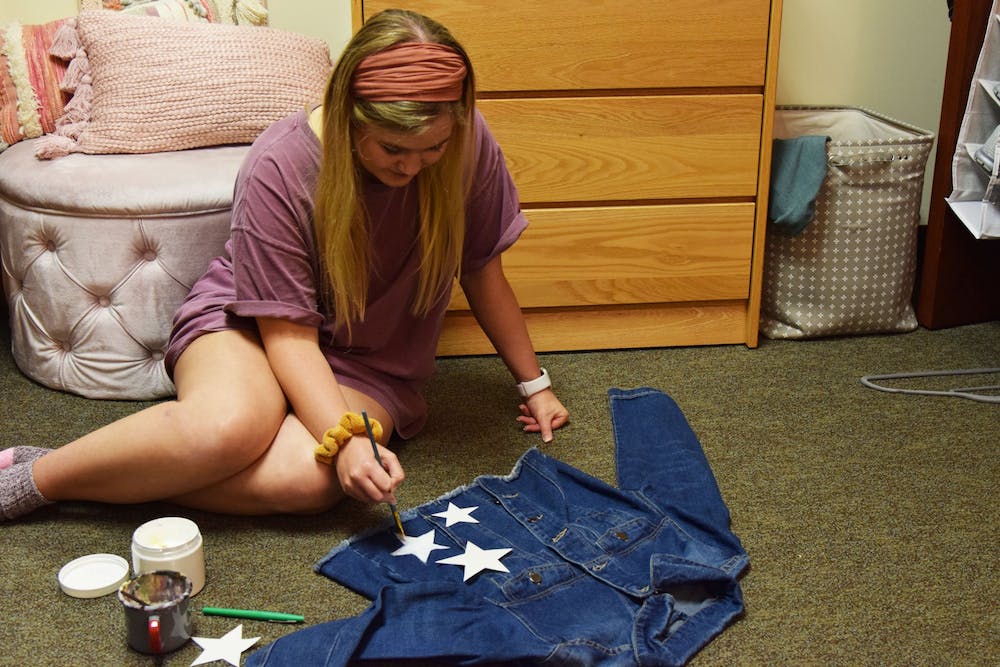 Photo by Kyra O'Connor | Elon News Network
Sophomore Mary Kate Douglas paints a custom jean jacket in her dorm room. After being commissioned to paint a jean jacket in high school, Douglas searched for an outlet to sell her art, which she found at Elon through the Student-Made Store.

Ryan McElhinney ‘19 and Lindsay Reeth ‘19 were juniors at Elon University and knew of students with Etsy shops and a passion for art outside of classes. They became interested in the entrepreneurship side of art and wanted to give students the chance to “express their creative passion,” according to McElhinney.

From there, they created the Student-Made Store. Being able to mix business with art while also showcasing students’ hidden talents is what they said gave them the idea for the store.

“We kind of coined the phrase ‘artrepreneur.’ So we kind of combined those things: the artist and the entrepreneurial spirit,” Reeth said.

The pair started the store in 2017, and it now features a variety of art made by Elon students, including jewelry, pottery, wall art and clothing. The idea to help showcase students’ passions has now grown into an online shop and a booth at both the Elon Farmer’s Market and S’mores with Outdoors.

Even during a global pandemic, the Student-Made Store continues to expand. The store has grown its online presence by developing audiences on social media and building up their website. Artists for the store sell their art at on-campus events and now also come from schools beyond Elon. McElhinney said the website “actually started doing better” when students were sent home from Elon back in March.

Even though they have graduated, McElhinney and Reeth make sure to stay involved in their business. McElhinney handles direct communication with the artists, such as pricing products and business strategies. Reeth handles the management side, which includes orders and on-campus events.

Once the store became more recognizable in the Elon community, artists began to approach McElhinney and Reeth to ask to join. The store, which is still run by McElhinney and Reeth, has become so successful at Elon that they are even expanding to other schools. They recently started selling art from students at the University of South Carolina and made one big Student-Made Carolina Store.

The original plan was to keep the Student-Made Store a local business in the Carolinas. However, when someone approached McElhinney and Reeth from the University of Washington about starting a store there, they decided to change their plan a little and go cross-country to a “whole different style of art,” according to McElhinney.

Even with the expansion to other schools, McElhinney and Reeth want to make sure that the Elon store continues to grow. The alumni want Elon students to “be more involved in the store and its mission than ever before,” according to McElhinney.

One of the best parts of the store for McElhinney and Reeth is learning about the student artists’ stories.

Mary Kate Douglas, a sophomore cinema and television arts major who sells her art through the Student-Made Store, said she lacked a platform to sell her hand-painted jean jackets in high school. One of her favorite parts about the store is being able to see everyone’s work.

“I love seeing all of the other work that the Elon kids create because there’s some people that just do the wildest things,” Douglas said.

From a young age, Douglas was very involved with art because her mother was an art teacher. Douglas remembers art coming naturally to her. In high school, a friend asked her about painting a version of a jean jacket she found on Pinterest, which sparked her interest in her craft.

In February of her first year at Elon, Douglas went on a brief coffee date with a future sorority sister who happened to work for the Student-Made Store. By the time Douglas left, she was a Student-Made Store artist.

“I showed her the one single jacket that I’d done, she messaged her boss, and I got hired within our 30-minute coffee date,” said Douglas.

Even though they love being online, Reeth also thinks that being in-person is vital to the experience. According to Reeth, the ability to actually be there creates an added benefit when interacting with customers, allowing a face-to-face meeting that isn’t possible online.

When the artists sell their pieces at events, they can create connections with their customers that aren’t possible online. Some of their in-person events include selling at the Elon Farmers’ Market every other Thursday and S’mores with Outdoors every Wednesday night.

In sophomore Faith Panciello’s case, in-person selling connected her with one of her customers. According to Reeth, while Panciello was selling her pieces at the Farmers’ Market, she ended up selling two pieces to an Elon staff member who works in her hall.