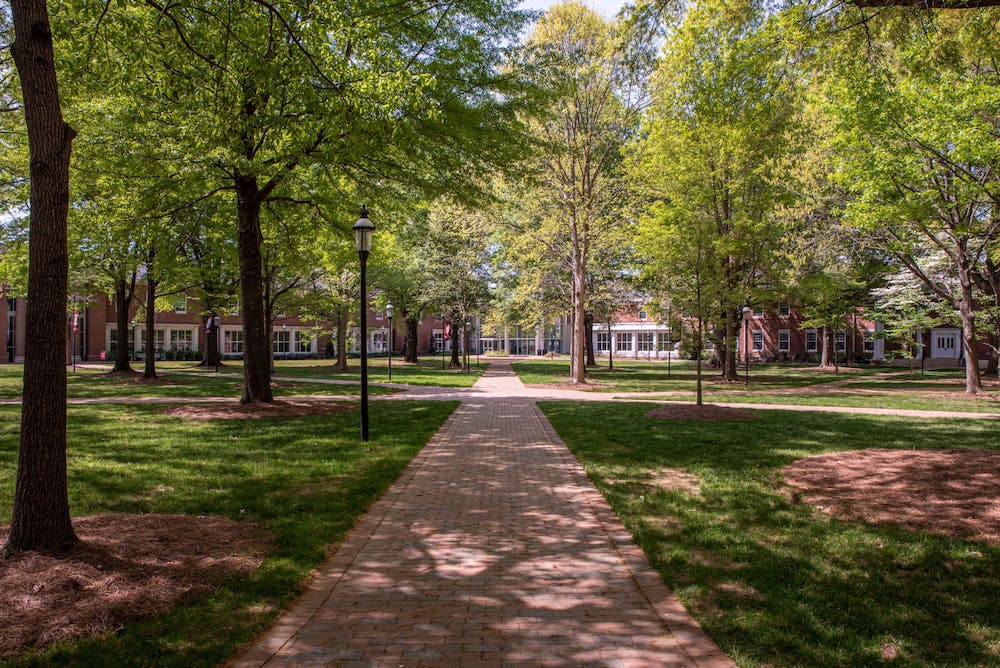 
Under the oaks at Elon University.

It’s a scary time to be black in America, Noah Dyson, a junior and black student at Elon, said. Following the killing of George Floyd, his feelings can’t be described with just one word.

“I’ve been in a mix of anger, sadness, confusion, hopelessness and hopefulness,” he said. “If those were a spectrum, I’m somewhere in between all of those.”

Floyd, a black man, was killed by a white police officer who kneeled on his neck for almost nine minutes in Minneapolis on May 25. Floyd’s death has sparked nationwide Black Lives Matter protests and conversations about racism and police brutality, including among Elon students.

Lake Sims-Winfrey, a senior and black student at Elon, said at first she wasn’t shocked when she saw the recording of Floyd’s killing because she’s seen similar videos in the past.

“I actually saw this video and saw it and kind of thought, ‘wow, that was terrible,’ but I didn’t even think anybody would care about it when they saw it,” Sims-Winfrey said, “because I’ve seen so many videos like that throughout my life and had so many personal experiences with that.”

The recent killings of black Americans has Michaela Bramwell, a senior and black student at Elon, feeling “very sad and helpless,” she said.

Protests have been happening amid the coronavirus pandemic, which is also disproportionately affecting black Americans, according to a report by APM Research Lab released May 26. The mortality rate for black Americans diagnosed with COVID-19 is 2.4 times higher than that of white Americans, the report said.

“Black people are already being even more heavily affected by this pandemic [and] have to go out and protest so that we’re not killed also by the police and putting ourselves in danger. It makes me so sad,” Bramwell said. “Because what is the option? We can’t stay home because if we stay home these things are going to keep happening.”

Bramwell said after she saw posts on social media speaking out against racism the week of Floyd’s death, she sent an email to Connie Book, president of Elon University.

On May 30, the day before Book released a statement titled "A Responsibility to Do More,” Bramwell emailed the president’s office asking the university to “please make a statement calling out the racial injustices in this country.”

“It makes me sad that I even have to write this to ask for my school to address the senseless killings of people who look like me,” Bramwell wrote in her email, which she shared with Elon News Network.

"Since I came to Elon, I've been told how important it is — diversity, inclusion — how important that is to Elon, the Elon family, that everyone's accepted.And I was shocked almost to find out that nothing was said, even though it kind of seemed like the world was on fire."

Bramwell also said in the email that Elon’s “silence about this is deafening.”

“Since I came to Elon, I’ve been told how important it is — diversity, inclusion — how important that is to Elon, the Elon family, that everyone’s accepted,” Bramwell said. “And I was shocked almost to find out that nothing was said, even though it kind of seemed like the world was on fire.”

Bramwell said after she sent the email, she received a response from the president’s office thanking her for writing and that a statement would be coming soon.

Book’s statement was released on May 31, the day after Bramwell’s email. In the statement, Book asked the Elon community to “join me in committing to renew and expand our efforts.”

“I personally commit to deepening my efforts, seeking new knowledge through reading and research to aid in more fully understanding the experience of the Black community and reviewing our university policies and practices,” Book said in the statement. “Members of the university’s senior staff join me in that effort and I ask that each of you do the same so that we can ensure that the privileges we enjoy are truly and fully available to all.”

Bramwell said Book’s call to action in the statement isn’t enough, especially considering Elon is a predominantly white institution. In the 2019-2020 school year, 17.9% of undergraduate students were students of color, according to the university fact book. 5.4% were black students.

“I appreciate the statement that President Book made,” Bramwell said. “I think every university president needs to make a statement. But I think as a [predominantly white institution], who prides itself on promoting diversity and inclusivity, needs to step up and be the example for actually taking a stance on what’s happening instead of this vague, in-the-middle part. You either support the movement or you don’t, and right now it feels like Elon is in the middle.”

In an email to Elon News Network, Owen Covington, director of the Elon University News Bureau, said Book and the university have nothing further to say about the statement.

“President Book carefully considered these difficult issues and issued a statement to the university community on Sunday,” Covington said. “In that statement she said she shares in the grief, anger and sorrow of Elon's Black community, and she is personally committed to deepening the university's efforts on these issues.”

Dyson said he was “dissatisfied, saddened and angered” by Book’s statement.

“I think she missed an opportunity to show that Elon University really cares and believes that black lives matter,” he said. “I wanted there to be more action-oriented things, more action steps. I believe that education is important, but I don’t want you just to read then do nothing. There should be some steps that Elon itself should be taking, but also steps that they should be taking to allow white students to actually do something and participate in ending and dismantling systematic racism.”

Sims-Winfrey said she feels like the university had to be “forced into” making a statement.

Life at Elon as a black student

Dyson said as a black man, he sometimes feels unsafe around Elon, given past racial incidents.

In January 2019 a whiteboard in the Koury Athletic Center was defaced with racial slurs and references to the Ku Klux Klan. One year before that, the rock in Loy Center, painted for the historically-black sorority Alpha Kappa Alpha was vandalized. In 2017, a fraternity president used a racial slur toward a black student.

Dyson said he is fearful when he goes on runs — something he does to help with his mental health, he said.

“I fear for my life just to go exercise, do something I need to be hopeful,” Dyson said. “I fear that a white truck with a Confederate flag will drive by and decide to stop and beat me. If they have a weapon, they can try to shoot me. And so when leaving the house, when simply trying to take care of my own well-being, that in itself is very scary and causes me to fear for my life.”

"I fear for my life just to go exercise, do something I need to be hopeful,"

Sims-Winfrey said racism around the country affects the black community at Elon too.

“This system, this racist, systematic way that we live, is affecting not only the existence of black people, but the way we act at school,” Sims-Winfrey said. “It’s hard being one of 20 people in your class that’s of color, not even just black but you’re the only person of color in your everyday class and you face certain things and people don’t understand simply for the fact that they’re white. And that’s not their fault, it’s not bad to be white, but they don’t understand that they have a certain privilege that I don’t have.”

However, Sims-Winfrey said she is hopeful for positive change — both at Elon and in the country — based on the number of people speaking out.

“I am hopeful that there can be a good change happening just due to the fact that so many people are speaking out about the injustices,” Sims-Winfrey said. “Whereas before it felt like it was just the black community or just the inner community that knew what was happening and they were the only ones protesting and using their voices and platforms. But now it feels like everybody from the youngest to the biggest businesses are speaking out about it.”

Sims-Winfrey, Bramwell and Dyson all said there are numerous ways to help combat racism — voting in local elections, donating to various organizations supporting the cause, joining protests, having conversations about racism with family and friends and educating oneself about black history, to name a few.

At Elon, Dyson suggested the university establish relationships with the local black community, introduce discussions about race in first-year classes and hire more people of color. All three students said it’s important for white people and non-black people of color to acknowledge the issue and speak up with them.

Perla Salazar-Rangel, a recent Elon graduate and Latinx student, said she’s using “whatever privilege I do have” to be an ally to the black community.

“It’s very important to recognize that of course no one is saying that white lives don’t matter, that Latinx lives don’t matter,” Salazar said. “It’s just a matter of prioritizing black lives because they’re the ones who are disproportionately affected by this.”

Salazar-Rangel created a guide for white and non-black people of color on how to have conversations about racism, after a friend inspired her to use her skills for good, she said.

“If you truly care, then you need to start at home and start on a smaller scale perhaps,” Salazar said. “Having simple conversations — they’re not very simple, they’re quite complex actually — with your family members if they don’t quite understand what’s going on, maybe explaining to them in a way that they can understand.”

However, Salazar-Rangel said being an ally extends beyond sharing social media posts — such as sharing posts condemning racism, ways to get involved and black squares in solidarity for Blackout Tuesday — and having conversations.

“For those students who are currently posting these things — and I know that they mean well, I know they aren’t racist, I know that they aren’t whatever and I appreciate that they’re posting right now — but I think that they need to show up a lot more on campus and show their support and use their privilege for good,” she said.

Sims-Winfrey said as time passes since Floyd’s death, she worries people will forget about the cause.

“I encourage all the white people, all my white friends, counterparts, whatever, to continue to fight,” Sims-Winfrey said. “Don’t give up. Because as black people we directly [and] indirectly have been fighting this thing for 400 years and we still manage to get as far as being President of the United States and we still managed to keep moving and keep fighting because it’s something we have to fight for. I mean some people feel like they don’t have to, but it’s something I personally feel I have no choice but to fight for.”