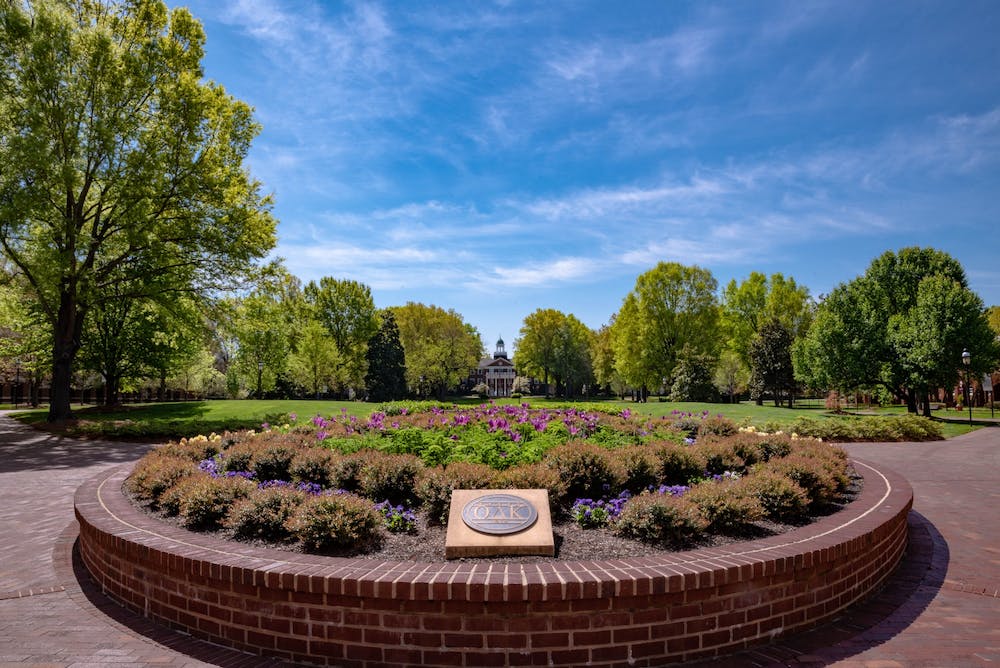 Amid national protests over racial injustice, Elon University President Connie Book expressed her solidarity to Elon’s black community in an email to students, faculty and staff.

George Floyd, a black man, was killed by a white police officer putting a knee to his neck on camera on Monday, May 25. Protests have taken place across the country, including in North Carolina cities such as Greensboro.

Book’s email on May 31 comes after the Center for Race, Ethnicity and Diversity Education sent an email to students on May 30 to acknowledge the “fear and anxieties” black students and students of color are feeling. She acknowledged that her email was addressing the “majority of the Elon community that is White.”

“Unfortunately, the repeated racism that Black members of our community face is proof that the systems we have built are not yet adequate,” Book wrote. “We have substantial work to be done and that will require the collective efforts of all of us.”

One frustration for black students like junior Lauryn Adams was the timeliness of Book’s statement. While Adams said Book’s statement was heartfelt, she felt the acknowledgement did not come from Elon until students expressed concern on social media and other universities released statements.

“Elon University prides itself as being a leading institution and it would have been nice if Elon had been quicker and more attentive to acknowledging the events and speaking up sooner,” Adams said. “Myself and other Black students on-campus should not have to worry about whether a statement of acknowledgement and solidarity was sent because Elon University was called out for it or if it truly came from a genuine place.”

As people across the country are pushing for change, Ashley Billie, a senior and black student, wants to see more things done for the black community at Elon. In response to Book’s email, Billie said she wants to see institutional change at Elon.

“There have been far too many racially charged incidents happening and the university is slow to put anything out, if at all,” Billie said.

In 2015 led by then-President Leo Lambert, Elon’s Presidential Task Force on Black Student, Faculty, and Staff Experience conducted a survey as part of a report on the climate on-campus.

Book said she is educating herself on the experiences of black students, so the university can take actions to support the black community at Elon.

“In the coming weeks, I personally commit to deepening my efforts, seeking new knowledge through reading and research to aid in more fully understanding the experience of the Black community and reviewing our university policies and practices,” Book wrote.

Student leaders have also expressed their solidarity for the black community at Elon. Student Government Association Executive President Robbie Miley released a statement offering his condolences to students. Miley said SGA would be initiating “further dialogues and future legislation,” to support diversity and inclusion on campus.

“I want to express my condolences and support for all minoritized groups on campus who may be struggling right now,” Miley wrote. “Any form of hate, bias and discrimination has no place at Elon, and I promise we will be working hard to combat similar acts of injustice both inside and outside our community.”

"We just want an open dialogue about race and racism on a broader scale, not just a few social justice-oriented events that the same few allies go to."

“It is disturbing to see how many of my white peers have turned to me in surprise. None of what is happening is new, and the fact that this is new to a lot of my white peers further shows how shielded by white privilege they are,” Adams wrote. “When these same white peers are people that I engage with every day, go to class with every day and talk to every day it is a very scary feeling knowing that they are not aware of the plights that I, someone they may call ‘friend,’ experiences every day.”

Billie encourages the university to facilitate an extensive conversation about race and racism on-campus. She suggests these conversations extend beyond allies of the black community and go beyond Elon’s foundational courses for freshmen.

“We just want an open dialogue about race and racism on a broader scale, not just a few social justice-oriented events that the same few allies go to,” Billie said.