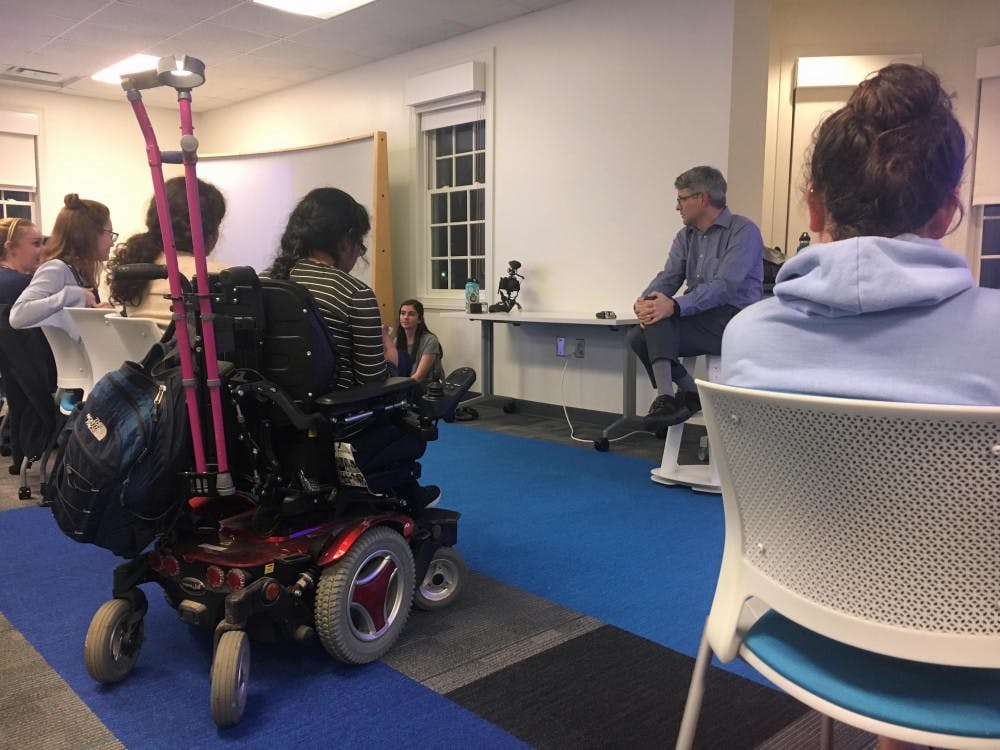 Harter addressed Elon's chapter of InterVarsity and attempted to answer their questions about an InterVarsity staff member being told to not return from a sabbatical. Harter claimed silence as Elon's policy in matters of personnel issues.

In December, Doug Arms, an InterVarsity staff member, announced through a video shared with InterVarsity members that he had been asked by the Elon University chaplains to step down from his position permanently. This was his last week on staff at Elon.

Harter explained in the "town hall" the complexity of this decision. The reasons behind the decision, he said, were a combination of complaints and concerns made about Doug over the years, as well as his relationship with the other InterVarsity staff member at Elon, Katie.

Doug and Katie began dating in the spring 2014 when Katie was a senior at Elon. They were married in June 2015. The issue of their relationship starting when Katie was still a student was a factor in the chaplain's office's decision.

"I'm honestly shocked the decision wasn't made four years ago," Harter said. "I was stunned. I didn't believe it at first."

Harter said he felt conflicted with the decision, and said it was a balance of "intent and impact." Their intent, he said, was to make InterVarsity members feel more comfortable, but he knew the decision would be impactful in upsetting students. Harter acknowledged in the end it was up to University Chaplain Jan Fuller.

Fuller was not at the discussion, and Harter said it was his decision not to invite her. The students were not happy to hear this. One student asked Harter for more transparency and open communication between their organization and the chaplain's office. Harter admitted to the tension between the groups, and said he would work to improve their relationship.

The other part of the decision, Harter said, was concerns brought to him about Doug. These came through personal interactions, as well as a survey conducted by student leadership in InterVarsity. While Harter couldn't comment on the specific instances brought to him, he did say some of them had to do with inclusivity of LGBT students in the organization.

"I've been here for four years and every year I've had students come to me with concerns," Harter said. "I have not seen this with any other campus minister. It's extremely unusual."

Students fought back against these complaints, and even attempted to outweigh them with personal stories involving Doug and Katie. Doug was called a role model by several students in the room. Even an alum called a student at the meeting so she could express how much that mentorship meant to her during her time at Elon.

"There's been more of a concern to defend Doug and Katie," Harter said. "Than to acknowledge some of the issues brought up."

Ultimately, it was Fuller's decision with the support of Harter to tell Doug he would not be returning to the Elon chapter. Doug Flaherty, the area director for InterVarsity in Western North Carolina, did not originally agree with the decision. Flaherty did say he regretted permitting Doug and Katie to date and continue to work together, according to Harter.

As for Katie, she is still the InterVarsity staff member for the Elon chapter, and Harter said he's "99 percent sure she'll continue to work here."

"I've been impressed with her grace and professionalism," Harter said. "I'm hopeful Katie will be with us far into the future."

When students repeatedly asked for a definitive time when they would know if Katie would stay through the fall, Harter said by "early April."

Moving forward, Harter's advice for the chapter was to be transparent with their stance on issues like gay marriage and other national InterVarsity statements.

"Define your own position on sexuality," Harter said. "Acknowledge multiple views are welcome. Be authentic about what you believe and who you are."