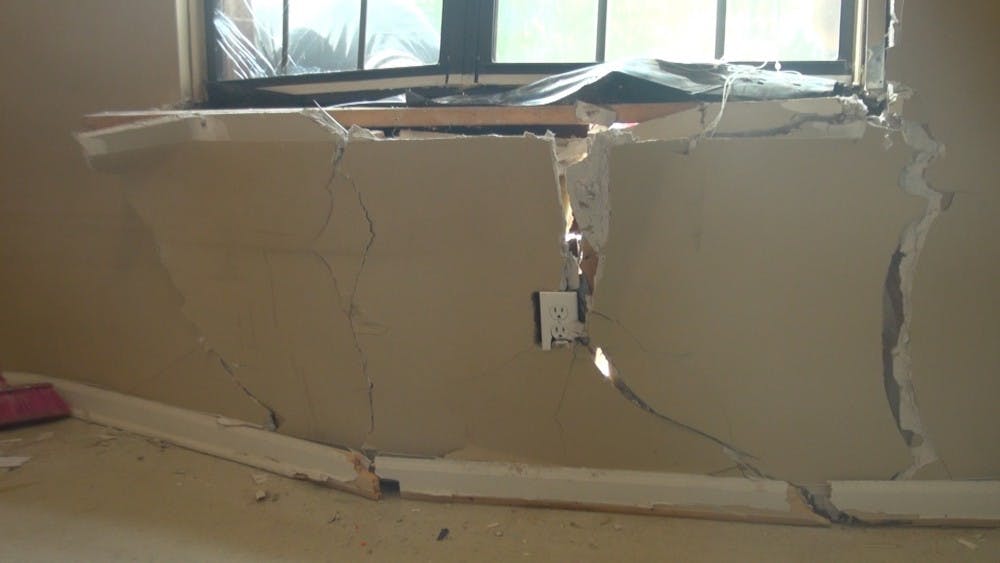 The student, whose bedroom was damaged after a car crashed through her wall Tuesday morning, said she has moved out of her Trollinger Apartment.  Police say there were no reports of injuries at the scene, but the crash left broken glass, pieces of brick and drywall scattered throughout one apartment bedroom.

"I am currently working through the stress and trauma since the accident," said senior Hannah Nelson, whose bedroom was damaged by the incident.  Nelson said she has received help from Elon faculty and her family, and she will be staying in a friend's spare bedroom for the next month until graduation.

Nelson said the repairs could take apartment contractors two weeks to complete and all costs are being dealt with between the driver and apartment management.

Riley Sieber was the man driving the vehicle, according to a police report.  Sieber said he is safe and all right after the collision but has no further comment about the incident at this time.

The police report stated that the estimated damage to Sieber's vehicle is $3,500.

"There was a sound of an engine revving and glass shattering," Nelson said, "and I realized there was a car in my room."

Residents at 321 West Trollinger Avenue, Apartment A2 said the incident occurred around 6:30 a.m. Tuesday when Sieber drove his Subaru Outback into the front bedroom of the apartment.

"I woke up suddenly, there were headlights in my room, I was kind of feeling moved around," Nelson said.

Elon Town Police said the collision was an accident and that no criminal charges will be filed. DeLeuw said alcohol was not involved in the incident.

According to witnesses, Sieber drove backwards into the apartment parking lot after hitting the wall, parked the car in a space and fled into a nearby apartment.

"I heard my roommate scream," said senior Shannon Foley, who was asleep in another bedroom when the incident occurred, "so I didn't really know what to expect. It sounded like glass was falling."

Senior Emily Glaze, another roommate, heard the noise and rushed to the damaged bedroom.  "You could definitely tell a car was attached to the bed," Glaze said.  "It was very obvious."

As the morning progressed, the three roommates said they began focusing on dealing with the clean-up.

"I was crying for a really long time," Nelson said, "and then we started laughing about it, because, who has a car in their bed in the morning? You never really expect that."

Apartment maintenance workers have since covered the broken wall with wood and cleaned up the scene.