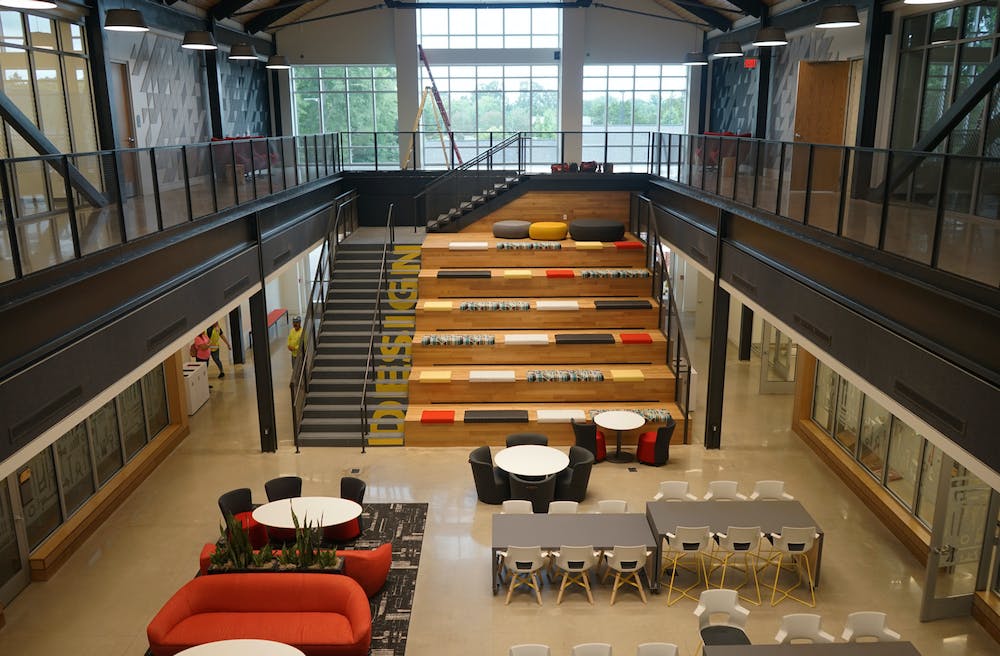 
A view of the Hunt Atrium inside of Founders Hall, one of the two main buildings of the Innovation Quad, a center for engineering and physics students. The facility was one made possible by donor contributions as part of the largest fundrasing camapign in Elon University history, Elon LEADS.

The public phase of the campaign was announced in April 2019, and through it, donors provided funding for scholarships and Elon’s campus, access to engaged learning programs and mentoring opportunities.

Vice President for University Advancement Jim Piatt told Elon News Network the Elon LEADS campaign has shed light on the impact philanthropy can have. Piatt said as a result of charitable gifts from this campaign from donors and supporters of the university, scholarships and additions to campus such as The Inn At Elon and Innovation Quad were possible.

“I think what happens after a campaign like this is our broader community of alumni, parents and friends see the power of philanthropy and the impact of it,” Piatt said. “As people see that, hopefully, they say, ‘I’d like to be part of that as well,’ and it just sort of raises everybody’s sights to what’s possible at Elon.”

The campaign also resulted in the largest single endowment gift ever received by the university. The Willians family, that includes Elon Trustee William (Lee) Williams III, Randall Williams and his wife, made a $10 million gift to endow the Dr. Jo Watts Williams School of Education in honor of their mother, who died at 92 in September 2021.

The endowment, according to the release, supports a number of initiatives across the university that includes everyone from students and faculty to administrations and partnerships within the community. It also establishes 20 scholarships in the Odyssey Program.

In addition to the university endowment, in annual giving, $78 million was raised in support of scholarships, programs and university operations from alumni, parents and university supporters. Donors also contributed $46 million in estate and other planned gifts.

Book, in the release, thanked contributors and campaign leaders who played a role in the historic Elon LEADS.

“We are grateful to the more than 34,000 donors to Elon LEADS who believe deeply in investing in Elon students and our bright future,” Book said in the release. “These historic investments in an Elon education will continue to fuel excellence and our national rise in the decades ahead.”

Piatt said the division of University Advancement takes its direction from Book and the Board of Trustees regarding what parts of the Boldly Elon Strategic Plan need funding and how to allocate it. Now that the Elon LEADS campaign has ended, they are looking at what comes next, though Piatt said he does not have a specific answer at this time regarding a new campaign.

“One thing we do know, based on our campaign experiences, we are always going to see job one and priority one as raising scholarships so that Elon can continue to be an affordable option for students,” Piatt said. “When we talk to donors, alumni, parents, friends of the university, we're always talking about the importance of supporting students so that students have access to an Elon Education.”

Piatt said having leaders who are invested in the university’s success makes a huge difference in developing and running a campaign.

“No campaign like this ever comes off without a lot of support,” Piatt said. “This campaign values the leadership of university President Connie Book and the Board of Trustees stating and sharing their vision in the university. Supporting that in our own ways is a huge example for the rest of our community to follow.”