Five seniors were honored prior to the Nov. 13 match 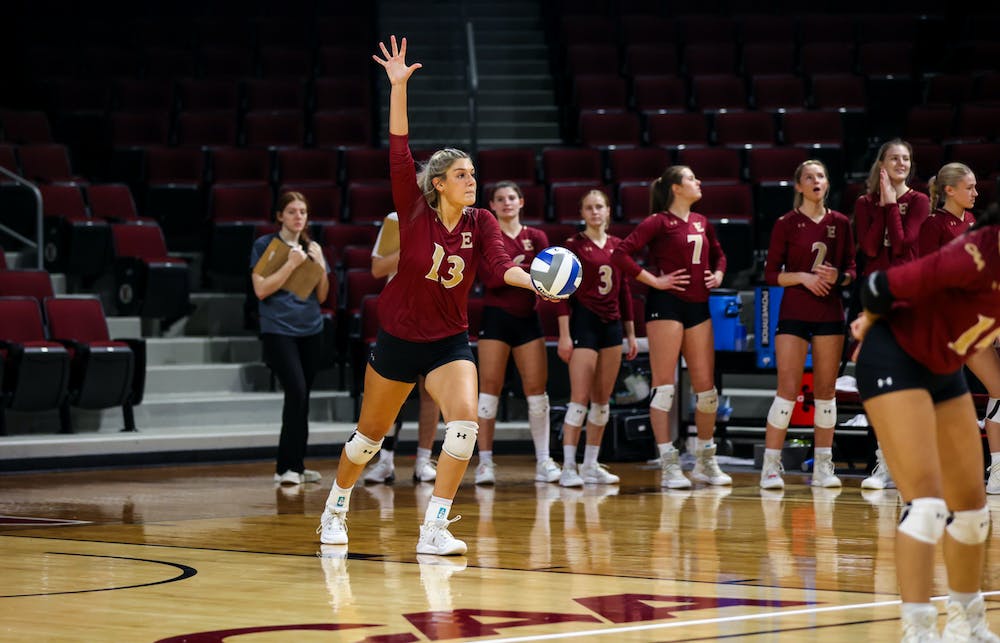 On a six-match win streak, the Elon University volleyball team returned to Schar Center for the last time in the 2022 regular season, hoping to secure one more win for the five seniors honored on Senior Day.

Ultimately, the Phoenix was unable to do so, suffering a 3-2 loss to the Stony Brook Seawolves. Senior middle blocker Jenn Krzeminski played an all-around game today, leading the charge with six blocks. She also tallied six kills and three digs on the day.

“I was happy with myself, but I do think there were some things that could’ve been improved,” Krzeminski said. “Overall, I know that I gave it a good effort.”

Prior to the match, Krzeminski and the rest of her senior class were honored for Senior Day by their teammates, head coach Mary Tendler, and friends and family. Senior defensive specialist Alex VanWestrienen enjoyed celebrating with her team.

“They’re like my second family,” VanWestrienen said. “So it was just awesome to get to experience that with them. I felt all the love.”

“There’s been so much support and so many people to go to,” Krzeminski said. “It’s been a great program and I’m really going to miss playing here. It’s given me a lot and taught me a lot along the way.”

Both Krzeminski and VanWestrienen credit the team and program for the experiences they’ve had over the years.

“This program has taught me a lot in life,” VanWestrienen said. “It’s taught me to be very hardworking. I know that everything I’ve experienced in this program is really going to help me later on.”

After the ceremony, the Phoenix jumped out in front of the Seawolves early. With a 6-0 scoring run, as well as three service aces, VanWestrienen was able to lead the team to a 25-21 win in the first set. Down early in the second, the Phoenix was able to propel past the Seawolves and take the victory by the same 25-21 score.

“It was a hard fought match,” VanWestrienen said. “I thought we worked really hard.”

In the third set, the Phoenix and the Seawolves went back and forth,  maintaining a 19-19 tie. But the Phoenix was ultimately unable to close the gap, losing 25-21.

With this win, the Seawolves found a new momentum, overpowering the Phoenix in the fourth 25-20. In the fifth and final set, the Phoenix found another tie score at 10-10, but was unable to take the lead before losing 15-11.

“I do wish that it ended on a better note, but I know that everyone out there was working their hardest, and that’s all we can ask for,” Krzeminski said.

Although the day did not end in a win, the Phoenix is looking to improve before the Colonial Athletic Association Championship Tournament.

“We’re going to learn from this game,” VanWestrienen said. “There’s things that we will take from this game and carry that on to our week of practice.”

Elon is the No. 5 seed for the tournament and will face Northeastern in the quarterfinals in Towson, Maryland Nov. 17 at 1:30 p.m.