Friends since freshman year, the duo combined their campaigns to both come out victorious 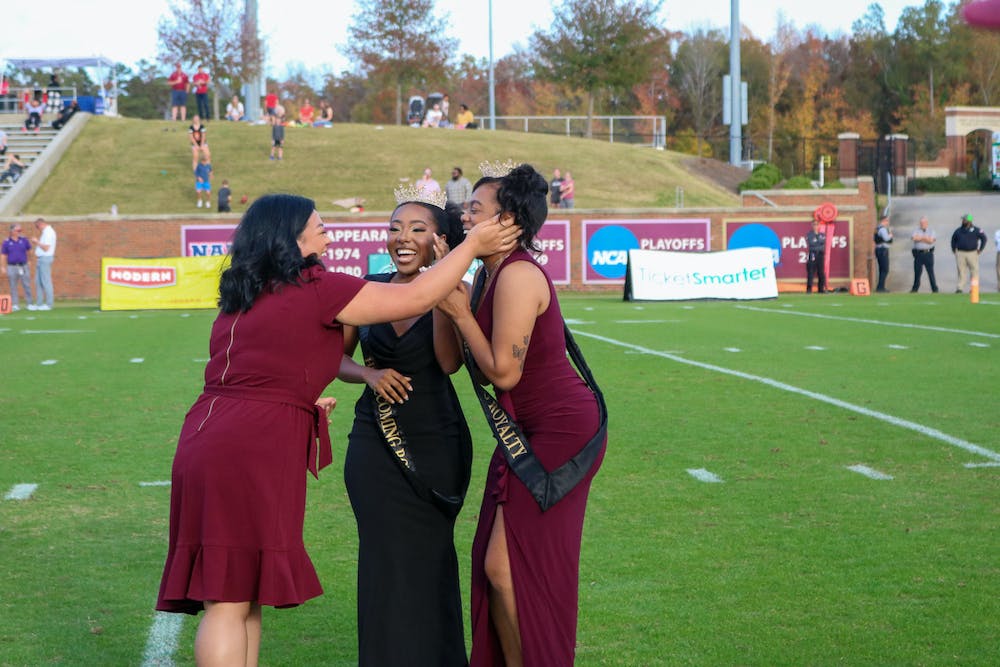 
Christina Carr and Mahogany Madden-Roberts were overjoyed after being crowned Homecoming royalty on Nov. 5.

Elon University seniors Christina Carr and Mahogany Madden-Roberts were greeted by a cheering crowd of students, alumni and families after they were crowned Homecoming royalty on Nov. 5.

The ten candidates were presented on the field at halftime, and the crowning ceremony took place after the third quarter of the Homecoming football game at Rhodes Stadium, in which Elon beat the University at Albany 27-3.

Carr and Madden-Roberts said they were both extremely excited and surprised after being crowned winners. The two have been friends since freshman year.

“I think it's amazing because me and Christina came into Elon together, we started a lot of our first year experiences together,” Madden-Roberts said.

Rather than compete against each other, Carr and Madden-Roberts leveraged their friendship and combined campaigns. Carr said this past week has been hectic as they tried to secure as many votes as they could.

“It’s actually been a super busy week for me, but me and Mahogany tried to tie our campaign together,” Carr said. “We made TikToks together, and I’ve been sending stuff in group chats and talking to my friends about everything.”

Carr and Madden-Roberts work closely together as the president and vice president respectively of Elon’s Black Student Union.

“This is what we were planning for,” Carr said. “We wanted to win together, and it’s so exciting that we both got it at the same time.”

Carr’s charitable cause was Soul Fire Farm, which is an Afro-indigenous group that fights against environmental and food injustices affecting minority groups. Carr said she chose Soul Fire Farm because it is similar to the work she wants to pursue after graduating.

“I have a really strong connection and care for Black individuals,” Carr said. “I want to help Black communities, and Soul Fire Farm tied really closely to personal values for me.”

Madden-Roberts chose Black Girls Do STEM as her charitable cause. Similarly to Carr, she chose a cause that related to her, as she is double majoring in public health and biology on the pre-med track.

“I was fortunate to have the experiences I had before coming to college, and I want other middle schoolers and younger students to be able to understand that as well,” Madden-Roberts said. “They can also as females be able to be in the STEM field.”