Students can vote for two candidates on Phoenix Connect until 5 p.m. on Nov. 4 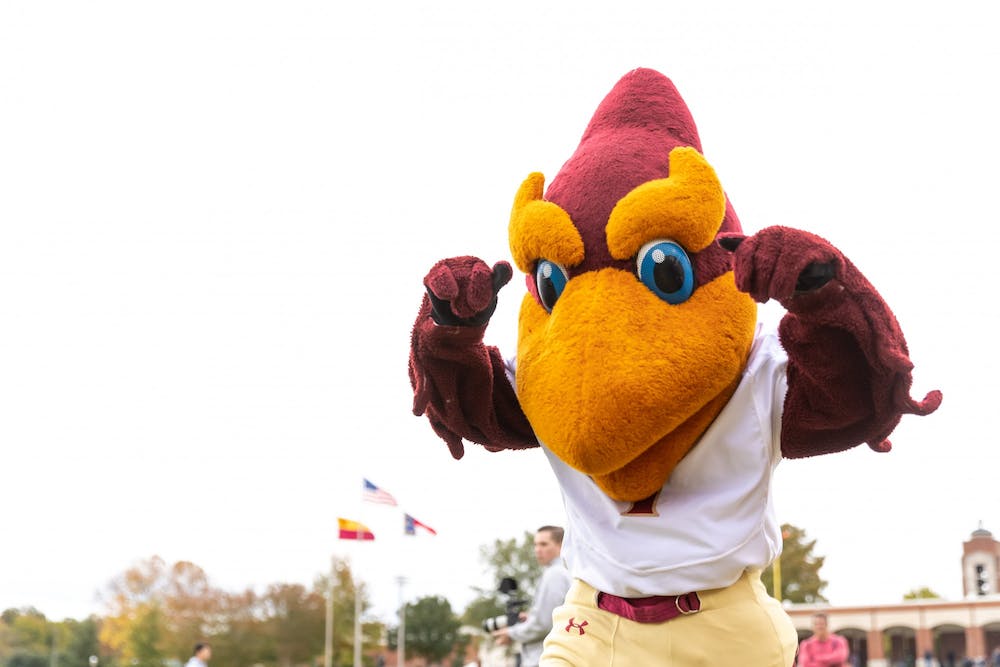 
The Phoenix at the Elon University football game against Villanova University during Homecoming Weekend 2021.

Ten seniors are vying to be crowned royalty on the Homecoming Court during the third quarter of the Homecoming football game. Students can vote for two candidates on Phoenix Connect until 5 p.m. on Nov. 4.

“Since my time at Elon, I’ve been really involved in student organizations, such as the Black Student Union and the Student Union Board, really helping connect students to one another and creating environments and spaces for them. I have been in the background of a lot of those things, and I think being a part of Homecoming royalty will allow me to continue to do that.”

Charitable Cause: Black Girls Do STEM

“I truly believe throughout my four years here, I've been able to embody the true Elon spirit — whether that was through working in New Student Orientation, traveling abroad in Cambodia for biology or doing … things such as the Black Student Union. Being able to win Homecoming Court would allow me to not only represent myself but also represent my peers, my organizations as well as my philanthropy that I'm supporting.”

“Since getting to Elon, I’ve always been very outwardly critical of the school in a lot of ways. But there was a question on the application that asked us, ‘What does it mean to have Elon spirit?’ and I said it’s wanting to see better from a place you love so much. I really do love Elon. It’s why I’m a tour guide, it’s why I’m so heavily involved in the Elon community. ... I’m running because I really want to see Elon be and do better, as someone working to improve that.”

Charitable Cause: Gift of Parenthood

“I wanted to be on Homecoming Court because it allows me to tie together all of the connections I’ve made, the friends I’ve made and all of my experiences over the last four years. Elon is where I get my education, but it is also … a place where I have really grown as a person. I feel like Homecoming is an opportunity to celebrate tradition … and celebrate Elon in a year where I feel like morale has been particularly low, so it’s a time to build community.”

“I chose to run because I feel like Elon has done a lot for me, and so I think that just running and giving a little more back to Elon would be a really good thing for me."

“I decided to run for Homecoming Court because it’s something I have watched everybody else the past couple of years run for, and it seemed like a really cool opportunity to represent school spirit and also raise money for a really great charity.”

“I decided to run for Homecoming Court because it’s something that I’ve always seen over the years and I thought, you know, what’s the worst that could happen, I could either get it or not ... And so I thought that it would be a great way to show my love for Elon, it’s given me so much, and I would love to give something back to it.”

Charitable Cause: March of Dimes

“It’s kind of cool to actually see how much of campus actually really knows you and would vote for you if they saw you. ... I’m just running for fun at the end of the day.”

“I decided to run for Homecoming Court to represent Elon. I feel like I had great times here, and I’d love to be an advocate for them. ... Honestly, Homecoming means coming together as a community, and I would get to see a bunch of alumni. I know that some of my friends that graduated are going to come back and it’s going to be awesome to see them and have them see me kind of represent Elon and its values.”

Charitable Cause: Meals of Hope

“I’m involved with the arts, especially with our music ensembles and music programs; I’m an engineering major, so I’m involved in that new area; I’m in a Panhellenic sorority; I am also involved with multiple Christain groups on campus, as well as learning assistance. ... When you think of Homecoming, it’s about bringing all these entities all together. I thought it would be a really fun experience and help to bridge those gaps between different areas of the school.”