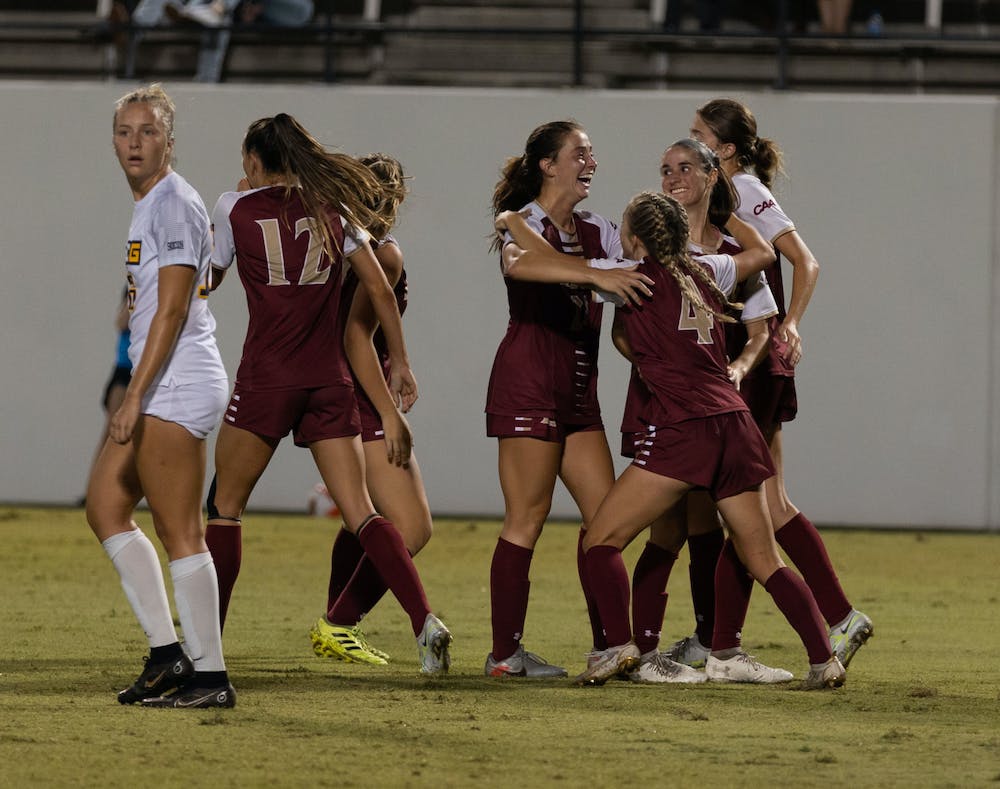 
The Elon University women’s soccer team celebrate a goal by freshman forward Ashlee Brehio in the closing minutes of the team’s 2-1 victory against the University of North Carolina Greensboro at UNCG Soccer Stadium on Sept. 16. It was Elon’s second ever win against the Spartans in 26 all-time meetings.

GREENSBORO – A late goal by freshman forward Ashlee Brehio helped the Elon University women’s soccer team secure its first win over the University of North Carolina Greensboro Spartans in over a decade.

Entering the match, Elon was 1-21-3 all-time against its former Southern Conference rival, with the only victory coming in 2011. The Phoenix had lost or tied its last eight matches against the Spartans.

With the score tied 1-1 with under six minutes remaining, Brehio kicked the ball into the bottom left corner of the net and past Greensboro’s goalie for her third goal of the season to give Elon its first lead of the match. The Phoenix ran the rest of the clock out to win 2-1 and end the program’s winless streak against the Spartans.

While this was Brehio’s first experience in the rivalry, she said being a part of the Elon team to end the winless streak against Greensboro is a special moment for her and felt how important the match was.

Despite Elon dominating possession early in the match, Greensboro scored the first goal of the match with 19:15 remaining in the first half. With time running out in the opening frame, senior midfielder Abby Fusca gathered a rebound on a blocked shot and floated the ball from just outside the box into the top right corner of the net to tie the match at 1-1.

“It was a nice feeling for us as a team because it gave us some momentum going back into halftime,” Fusca said. “Going into halftime, we could reset. That was really important to go into the second half tied up.”

Both teams struggled to take control of the match in the opening stages of the second half, but Greensboro began to put pressure on Elon’s defense in the final 20 minutes. Phoenix defenders blocked several shots to keep the ball away from junior goalkeeper McKenna Dalfonso and keep the score tied.

Payne said he was proud of Elon’s back line for their effort and believed Greensboro's strong stretch of play in the second half was a key to the Phoenix winning.

“We showed a lot of character, a lot of resilience, but most importantly, we showed a lot of discipline,” Payne said. “We knew that there were going to be moments in the game where we had to defend a certain way, and we did that.”

With the victory, Elon finishes its non-conference slate with a 4-2-2 record. The Phoenix will begin Colonial Athletic Association play on Sept. 22 with a home match against Northeastern University at Rudd Field.

Fusca said Elon’s difficult non-conference schedule has helped prepare the team for CAA matches, and she is excited for the team to play its conference opener at home.

“We’re in a really good spot,” Fusca said. “We’ve had a lot of hard contests. We’ve been challenged a lot of times, but that’s the point of these non-conference games.”