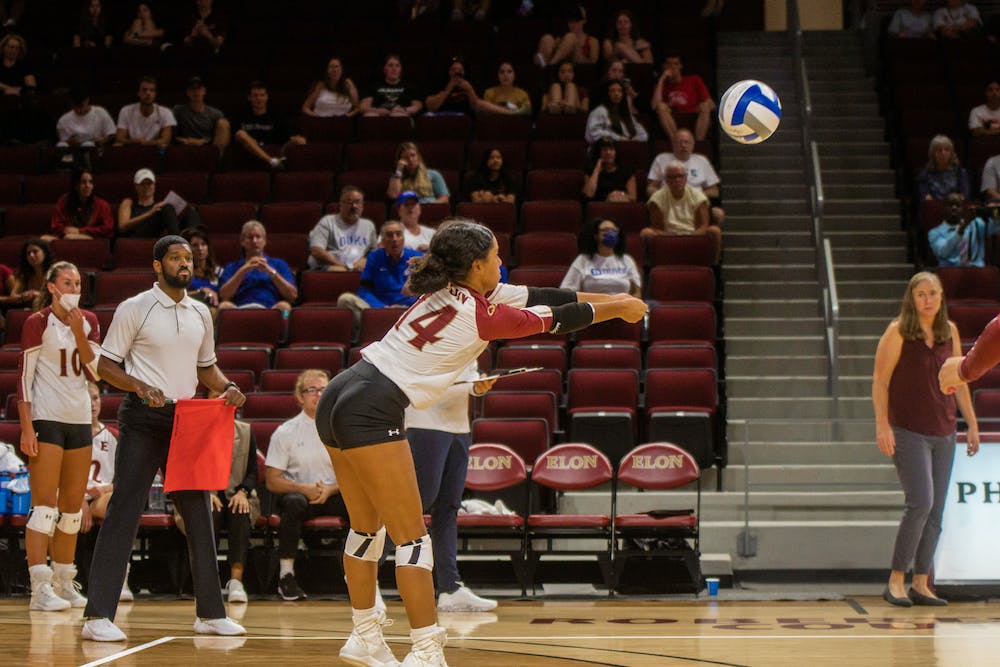 One night after making her first career start for the Elon University volleyball team, freshman Sydney Daniels felt calmer taking the floor tonight for the team’s match against the University of North Carolina Greensboro Spartans.

Filling in for senior libero Jordan Gower, who currently ranks No. 5 in the country in digs per set, for the second straight match, Daniels said she was able to enjoy the experience more tonight compared to her first start.

“Yesterday, I was a little bit more nervous because I had to prove myself,” Daniels said. “But it was definitely a lot of fun today, and I was excited to play with all my teammates.”

After Elon failed to close out a 2-1 lead against Florida A&M yesterday, Daniels posted a career-best 28 digs and helped the Phoenix shut the door in the fourth set as the team earned its first home victory of the season and snapped a five match losing streak.

“We’ve been having difficulties recently, but we pulled it out today,” Daniels said. “We did really good with serve and serve receive and finishing the ball like we always talk about.”

After the teams split the first two sets, Greensboro held the lead for most of the third set. Trailing 20-17, Elon won eight of the final 10 points to win the set 25-22 and take a 2-1 lead.

“We had to really fight to get back into and win the third, and that propelled us into the fourth, head coach Mary Tendler said.

Elon carried its momentum from late in the third set into the fourth, as the team raced out to an 11-5 advantage. The Phoenix stretched its lead to as many as nine points and took the set 25-19 to clinch its first win since Aug. 27.

Senior outside hitter Leah Daniel led Elon with 16 kills, seven of which came in the team’s fourth set victory. The Phoenix hit .231 in the fourth, its best hitting percentage for a set in the match.

While the team is still struggling to find consistency on offense, Tendler said Daniel took over late in the match and was happy with the team’s attack from its middle positions.

“I still think we have a long way to go offensively, but you saw Leah get hot later in the match and she was unstoppable,” Tendler said. “We were a little more balanced. To go to the middles, we have to have good passing and our ball control was good to be able to do that.”

Tendler said Elon learned from its loss to Florida A&M, as the Phoenix controlled the fourth set and played with poise while trying to close out the win.

“We learned from the night before that we need to take care of business and sometimes our team doesn’t have that sense of urgency and understanding of the moment. But I feel like they felt that tonight,” Tendler said. “They just made plays. They made plays when they needed to tonight.”

Elon finished the match with a season-high 16 blocks, as senior middle blocker Jenn Krzmeinski and freshman middle blocker Lindsey Harris each finished with seven. Tendler said the team’s front line made a big impact on the team’s performance.

Elon will enter Colonial Athletic Association play with a 2-7 record. The Phoenix will travel to Greensboro for its first two conference matches against North Carolina A&T on Sept. 17 and 18. Both matches will begin at 2 p.m.

For Tendler, entering conference play with a win is important for the team’s confidence. While the team’s record to this point is not what it wanted, Tendler said she has learned a lot about the team through its non-conference schedule, especially the team’s younger players.

“We weren’t exactly sure what they’re going to do in the match when there’s pressure, or if they are better on the left side of the court or the right side of the court. So we have a lot more knowledge of our team and what our strengths are going into conference,” Tendler said. “You can see the players trusting each other more as we go through.”