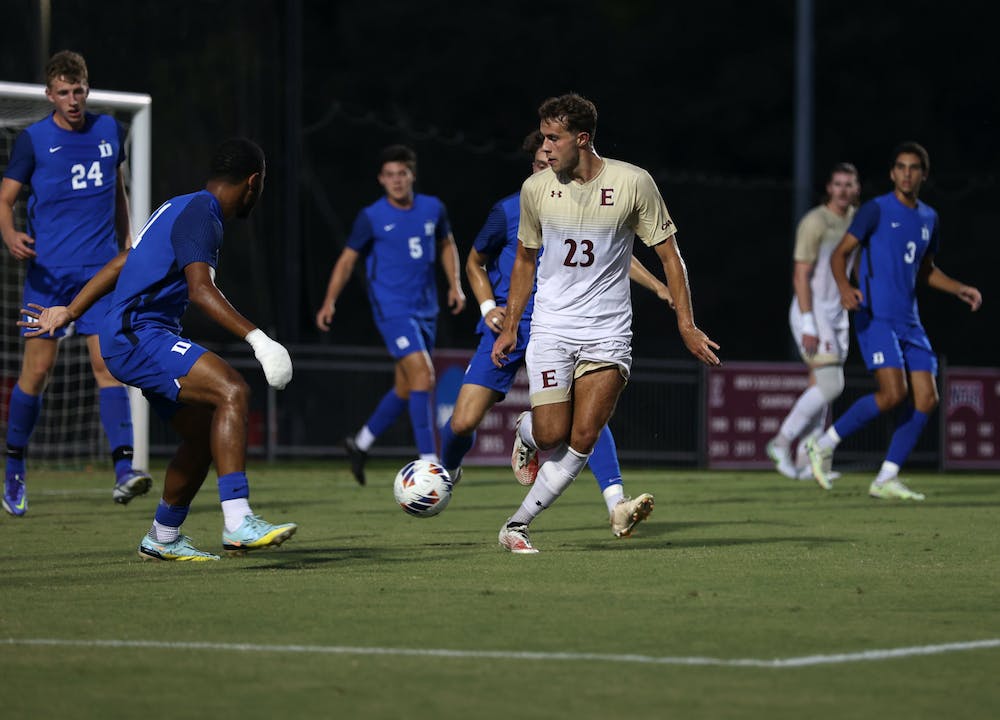 The Elon University men’s soccer team hosted the fifth-ranked Duke Blue Devils Sept. 20 under the lights at Rudd Field, and despite the Phoenix’s best efforts, came up short, 1-0.

The game was physical from the onset, with both teams committing hard fouls in the beginning. During the first half, both Duke’s Peter Stroud and Kamran Acito received yellow cards from referee John Rush.

Elon junior forward Jack Dolk said the Phoenix came out with the intent of playing with high energy from the first whistle.

“Our main objective was to come out with a lot of energy and high intensity in the first five, 15 minutes,” Dolk said. “I think we did very well and put pressure on them. I’m pretty sure we made them feel frustrated about themselves … They were forced to make a change in their formation [at halftime].”

The Phoenix surrendered its second of four first-half corner kicks in the 21st minute. Blue Devil freshman defender Axel Gudbjornsson headed the ball toward the lower left corner of the Elon goal, but graduate student goalkeeper Ryan Bilichuk made the save, catching the ball and falling on it.

Bilichuk saved two of Duke’s three shots on goal, and four others off the boot of a Blue Devil failed to find the target. Four of Elon’s eight shots found the frame, but Duke’s graduate student keeper Eliot Hamill kept out all four.

Elon had its chance from the corner early in the second half. Senior midfielder Jeppe Jordoson delivered a high, sweeping ball that connected with Dolk’s head. Dolk lifted the ball towards the far post, but it carried over the crossbar for a Blue Devil goal kick.

“Duke is an exceptionally talented, athletic and well-coached team, but tonight, we were probably a little bit better than them in many areas of the field,” Phoenix head coach Marc Reeves said. “If you score early, like on one of the chances we had, the game could have been very different.”

Duke earned a chance to break the deadlock in the 54th minute after a foul from redshirt junior Marco Vesterholm. Versterholm collided with Duke’s Peter Stroud in the air near the top of the 18-yard box, and the ref blew his whistle to a chorus of boos from the crowd and protest from the Elon sideline.

Duke sophomore Shakur Mohammed slotted home the ensuing 20-yard free kick, curling the ball with the inside of his right foot into the bottom right corner. Elon players renewed their protest with the officials as Mohammed jogged back towards his side of the field.

“We continue to have good opportunities to try and grab a goal, but we just didn’t get one,” Reeves said.”It’s really unfortunate that — I guess a foul, you can call it a foul — results in us losing the game … That’s tough to take, but that’s football.”

Dolk expressed similar frustration with the call but emphasized that the team should stay positive.

“Everyone was super excited, and I’m happy with the performance,” Dolk said. “Unfortunately, we came out on the wrong side of one bad call.”

“It’s important that we recover and understand why we played well tonight,” Reeves said. “As I said, it’s tough to take, but it doesn’t impact us in our CAA mission. We’ve got plenty of time to make it right now before we go to Monmouth.”