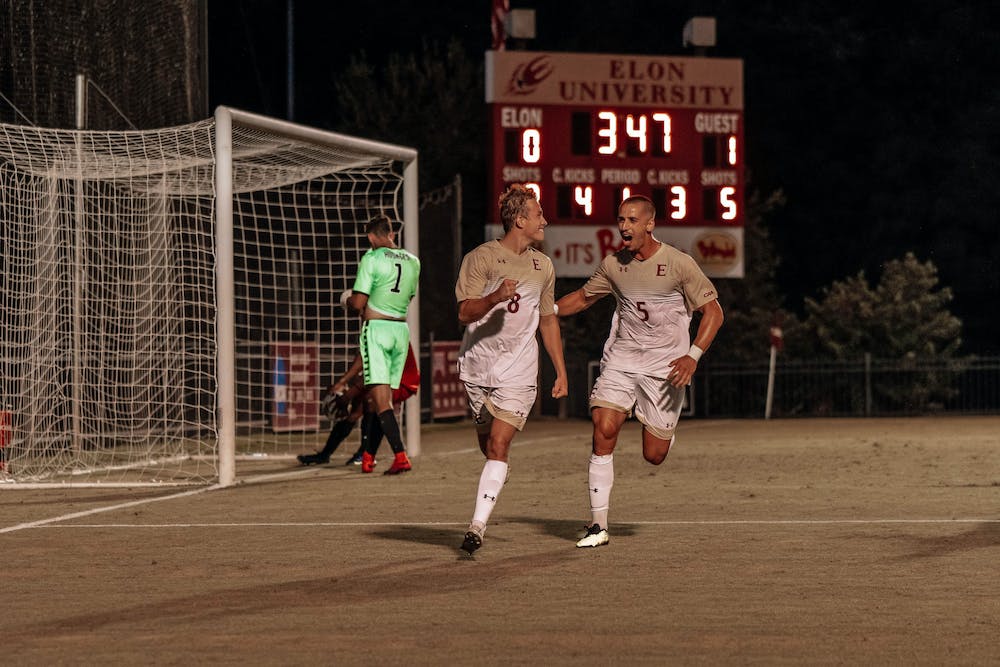 The home opener for the Elon University men’s soccer team against the Northeastern University Huskies was a ferocious battle that featured physical play, 23 fouls, eight yellow cards and two red cards, as the Phoenix lost its Colonial Athletic Association opener 2-1.

Elon had the momentum in the first five minutes of a rigorous start to the match, but it was Northeastern who jumped on the scoreboard first after a costly foul by graduate student defender Franc Gamiz Quer in the latter half of the 13th minute set up Federico Tellez with a penalty kick that resulted in a goal to put Northeastern ahead 1-0 early.

“We need to be more careful in our own area,” head coach Marc Reeves said.

It was the first time the Phoenix had trailed this season and was the first goal allowed by graduate student goalkeeper Ryan Bilichuk, who posted back-to-back shutouts to start the season. After close to 30 minutes of pushing and shoving, sophomore midfielder Scott Vatne scored Elon’s first goal of the game on a penalty kick of his own to even the score at 1-1 before halftime.

Vatne’s goal came at the 41-minute mark, as he placed it in the bottom right corner of the goal, sneaking it past the outstretched arms of a left-diving Colby Hegarty, the goalkeeper for Northeastern.

With the score 1-1, Reeves preached stepping up and stopping Northeastern on the defensive side of the ball in the locker room at halftime.

“We talked at halftime about how we need to be better and have more pride in our one-on-one defending and our group defense,” Reeves said.

However, a defensive miscue by the Phoenix in the 47th minute allowed Northeastern’s Fraser Brown to cut through defenders and put the ball in the bottom left corner of the net to put the Huskies ahead 2-1.

“You don’t get anything when you let up that second goal after halftime,” Reeves said. “You can’t have someone walk through a team.”

Brown’s strike in the 47th minute not only put Northeastern in front but also turned out to be the difference maker, as neither team scored again. Despite the loss, Bilichuk said he was pleased with how his team fought late in the match.

“We showed a lot of resilience,” Bilichuk said. “We went to the last minute, we never put our heads down. I think that's a huge positive for any team. We fight for each other, we play for each other and that’s going to show while we’re on the pitch and when we are in tough moments.”

Elon had several chances to tie the game in the second half but could not convert. One example was in the 52nd minute, when freshman midfielder Majaliwa Msabaha sent a ball into the back right netting but was ruled offside. Reeves said mistakes like these cost the Phoenix a chance to get points toward the conference standings.

“When you put yourself 2-1 down against a very organized, very technical and very strong and mature, well-coached Northeastern team, you’re going to struggle to maybe get back into it, but we still had chances all the way to the last 30 seconds of the game,” Reeves said.

Elon will look to regroup on Sept. 10 when the team faces Stony Brook, another CAA opponent, at Rudd Field.

“It’s a long season. There are a lot of points that are at stake and there are still a lot of games to play. We can’t put our heads down now and give up. It’s too early,” Bilichuk said. “Way too early.”